As many have been anticipating, the Fed has moved up the timeline for its first post-pandemic rate hike. Much has changed since the Fed cut rates to zero and began expanding its balance sheet in early 2020. Not only has the economy likely recovered to pre-pandemic levels, but many also believe it is at risk of overheating. There are signs of inflation, businesses are hiring, consumers are spending, and the stock market continues to reach new all-time highs. How can investors – especially those who rely on fixed income – stay focused as the market adjusts?

Last week’s update to the Fed’s summary of economic projections set the first expected rate hike to early 2023, still at least a year and a half away. Before then, the Fed is likely to begin “tapering” its bond purchases – both discussing it publicly and then actually doing so.

Tapering is simply the process of slowing the pace of its $120 billion per month bond purchases. We are still a long way from the Fed actually reducing its balance sheet.

While these forecasts come directly from FOMC members, they should not be viewed as promises or guarantees. After all, the Fed and its governing members can and do change their minds as circumstances change, especially if there are unforeseen shocks to the financial system. Instead, these projections should be interpreted as hints into how the Fed views the economic situation today.

The earlier “liftoff” date suggests that the Fed believes the economy is healthy. When it comes down to it, the Fed raising rates is a good sign, not a bad one, since it means the economy is growing, even if there are short-term concerns. Despite this, the path of rate hikes is still extremely gradual by historical standards. This is because the Fed expects to keep rates low not until inflation is above its 2% target, but until the average rate of inflation (over an unspecified period) is above 2%. In short, the Fed will be more tolerant of an overheating economy.

What matters for investors and markets is having time to adjust. Although markets were volatile in the days immediately after the Fed’s last announcement, the S&P 500 only declined by 2.1% from its recent highs before stabilizing. The largest intra-year decline has still only been 4% – far below the 15% average annual pullback.

Perhaps what’s more important for everyday investors is the impact on the bond market. Interest rates have felt volatile this year as the recovery has accelerated and inflation concerns have risen. Still, measures of bond volatility such as the MOVE index are nowhere near flashing red. Broad fixed income indices such as the Bloomberg Barclays Agg are negative on the year, but this is to be expected when the 10-year Treasury yield has risen from 1% to just under 1.5%, and is expected by some to reach 2% in the near future.

While losses are never pleasant, especially for those in or near retirement that depend heavily on fixed income instruments, it’s also important to not overreact. During the 2013 taper tantrum, the bond market was much more volatile and finished the year in negative territory. However, it recovered the following year as markets adjusted to new expectations. Outside of these episodes, fixed income continues to provide portfolio stability even with rates at historically low levels. Finding the right mix of fixed income in a portfolio that lines up with financial goals is still the key challenge today – and the reason every investor can benefit from financial guidance.

Investors ought to maintain a long-term outlook as the market continues to adjust to this expansionary phase of the business cycle. Below are three charts that can help to put new Fed expectations and the immediate market reaction in perspective. 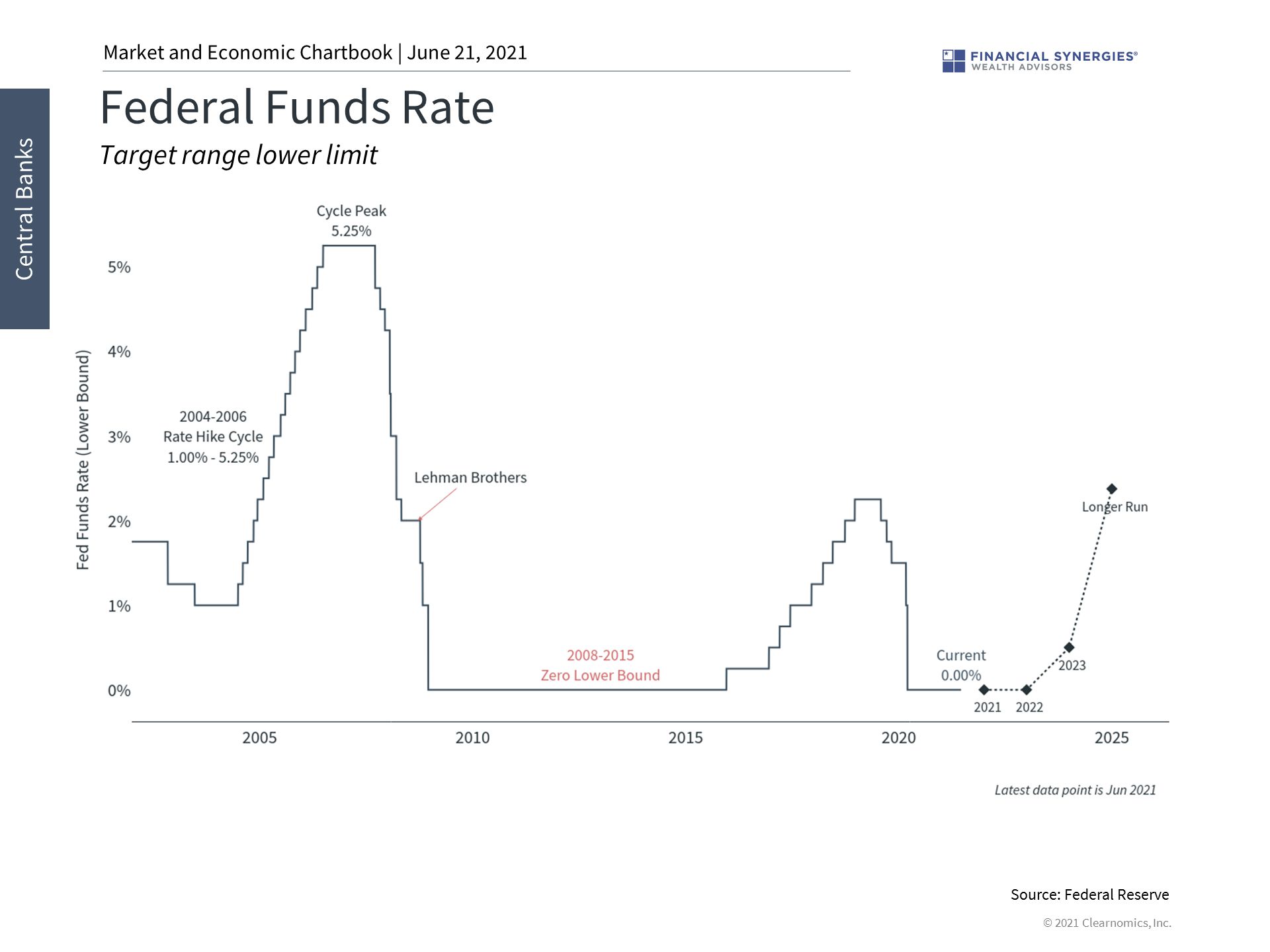 The FOMC’s latest summary of economic projections (SEP) suggests that rates could begin to rise in 2023. This is in response to an accelerating economy with signs of inflationary forces. These forecasts by Fed officials could change as the economic data change.

2. Markets are adjusting to these new expectations 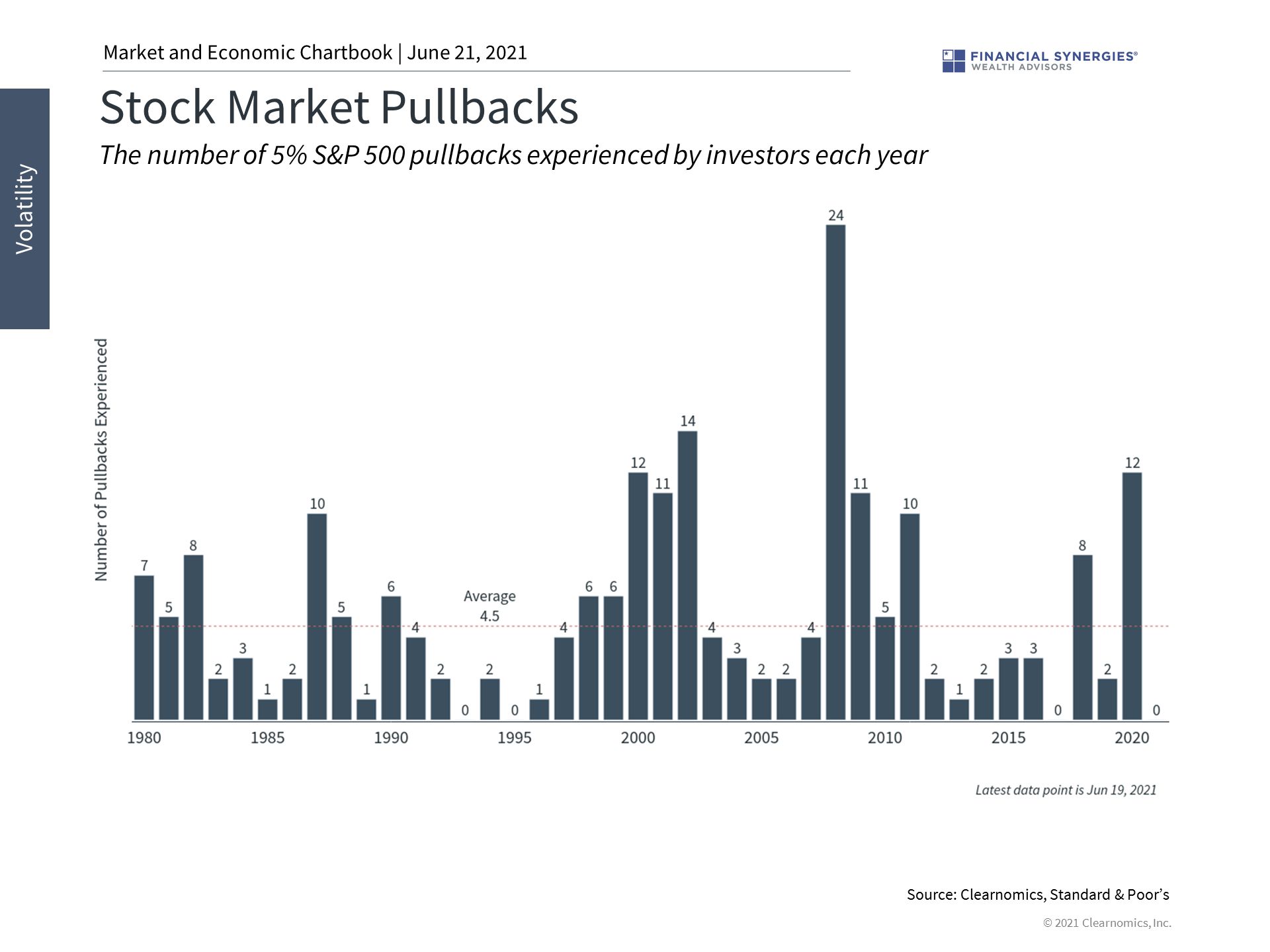 The S&P 500 fell 2.1% from its peak the days following the Fed announcement. This is low by historical standards and the largest intra-year decline in 2021 has only been 4%. Investors should always be prepared for higher levels of stock market volatility.

3. Many bond sectors are negative as rate expectations rise 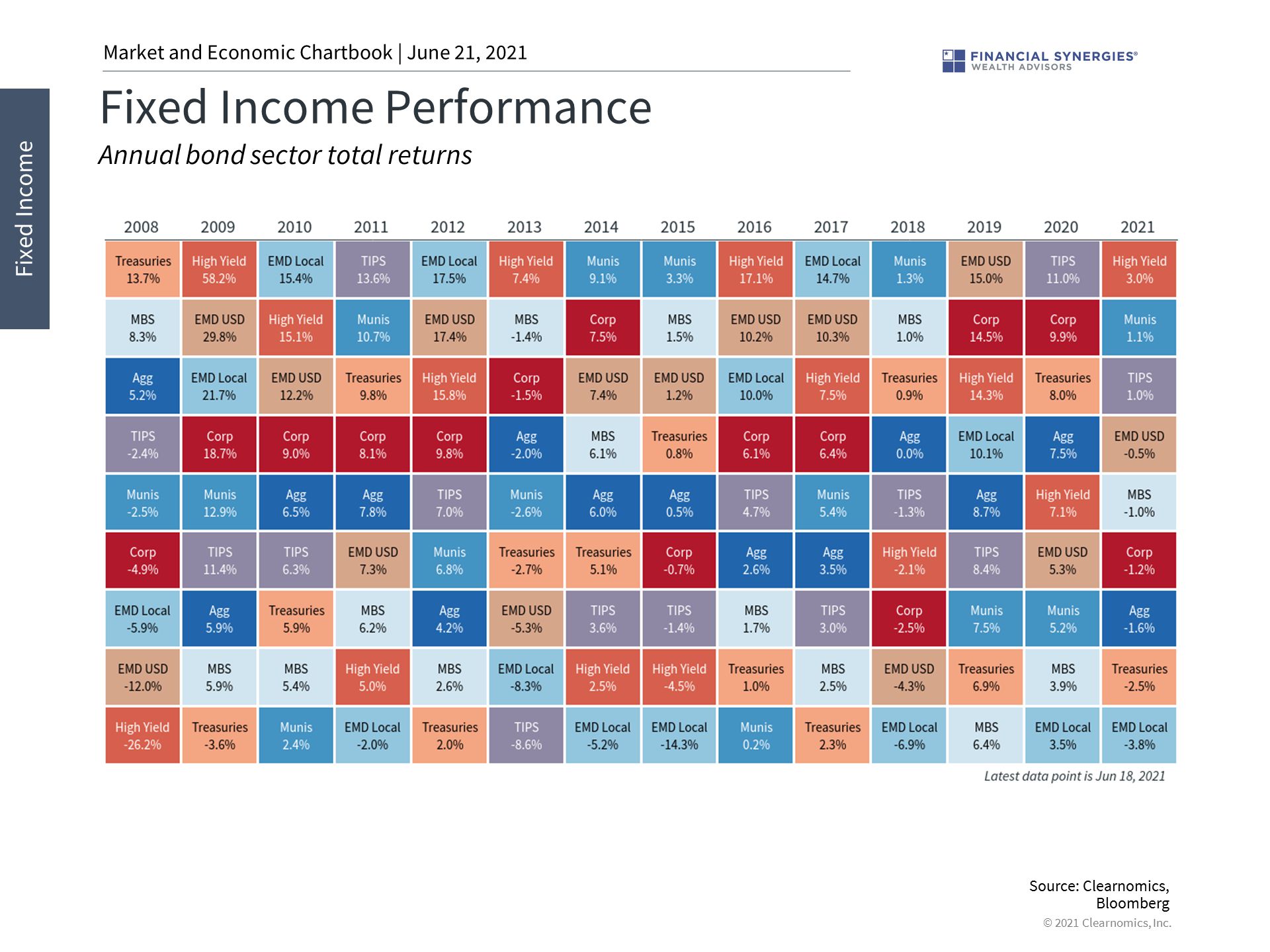 Broad bond market indices are negative this year as they were in 2013 as markets adjust. However, fixed income still plays a very important role in all portfolios.

Investors should maintain a long-term perspective as Fed expectations change. So far, the tantrum has been minimal as markets adjust.