The Importance of Starting Early

The NCAA, the governing body of North American collegiate sports, has historically limited the monetary benefits that college athletes could receive from their schools to little more than scholarships. Due to some recent state-level changes and high-profile court rulings, student-athletes will now be able to cash in and make money based on their names, images, and likenesses.

While it is still forbidden to directly pay athletes to attend certain schools, they are eligible to profit from ventures such as autographs, monetizing social media, hosting training camps, and company-sponsored advertising campaigns.

With college athletes now being eligible to earn substantial income, it is a great opportunity to highlight the advantages of financial planning and investing at an early age.

Compound interest may not be the flashiest of subjects, but Albert Einstein once referred to it as “the eighth wonder of the world,” which means it is probably something worth paying attention to. Compound interest is simply earning interest on your principal as well as your previously accumulated interest. By leaving your principal and earned interest (or gains) invested, you are essentially putting your money to work for you as it continues to grow.

While this is not a way to “get rich quick,” it is a proven strategy to accumulate substantial wealth over time. The duration in which the money is invested plays an important role in the success of this strategy and has an enormous impact on the outcome. So, what is the best way to take advantage of that? Starting early.

Here is an example of the impact of starting early. Imagine there are three investors, each contributing $1,000 per month for ten years at an assumed 7% annual interest rate.

Investor #2: Invests the same amount but did not start until age 35 and continues until 45 years old.

Investor #3: Also contributes the same amount of investment principal but got a late start at age 45 and stops at age 55.

Although they each invested the same amount and earned the same rate of return, by the time they reach age 65 they have drastically different results.

The impact is not immediately noticeable, but as time advances the impact of years invested becomes quite clear.

The new ruling by the NCAA presents student-athletes with a great opportunity to generate income, and some are already taking advantage of it. Auburn quarterback, Bo Nix, did not waste any time announcing his sponsorship with Milo’s Tea just minutes after the new rules were in place.

Although saving and investing may not be the most exciting way to use your money in college and early adulthood, it is hard to argue the importance of doing so. With the substantial increase in opportunities for younger generations to accumulate wealth, there is no better time to start investing than today. 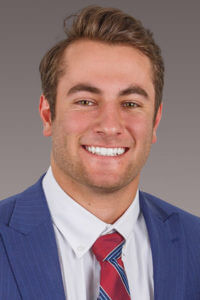