The Great Depression vs. Today

Given the speed and severity by which global economic growth has collapsed since the coronavirus forced nations to shut down, many people are naturally wondering whether we are in a recession or a depression. While there are no hard-and-fast rules for distinguishing between the two, there are clear qualitative differences. It’s important for us to understand these differences, and how they might affect economic growth and market returns in the years and decades to come.

In the U.S., there has only been one economic downturn over the past century that is considered to be a depression. The Great Depression officially began in August 1929 and lasted until 1938, with one smaller cycle in between, leading all the way up to World War II. This is a period that has been deeply studied by academics and policymakers alike, and is way too much to cover here. However, there are a few key factors to highlight.

From a Main Street perspective, the Great Depression was distinct from the recessions that followed. With the economy shrinking in half, that era was defined by long breadlines and persistently high unemployment of around 25%. At the risk of oversimplifying, this was due to a “deflationary spiral” – a lack of aggregate demand that resulted in reduced business activity which further led to job cuts and declining consumer demand. Among the initial catalysts was the 1929 stock market crash, just as today’s catalyst is the COVID-19 public health crisis, but the decade-long depression that followed was worsened by aftershocks in government policy, the financial system, and consumer behavior. Three differences from the modern era stand out:

First, there is general agreement that a number of policy errors, especially with regard to monetary policy, either caused or prolonged the depression. The Fed had begun to raise rates in 1928 and allowed the money supply to decrease during the 1930s. With the benefit of historical perspective, this was the opposite of the response needed to curb the downward spiral. Today, the Fed has quickly increased stimulus measures by lowering the fed funds rate to zero, boosting its balance sheet, and activating a number of emergency lending facilities.

Second, the ripples across the financial system caused an on-going series of bank failures. Many of these were traditional runs on banks, which institutions such as the FDIC were later established to prevent. The banking system was quite different then, and banks today are likely to be in a better position than during the 1930s or in 2008. If nothing else, the primary concern among consumers and businesses today does not appear to be a lack of confidence in the banking system.

Third, and on a more technical basis, the gold standard and fixed exchange rate system created a myriad of problems for the Fed and allowed problems in one country to transfer to others. One reason the Fed could not easily increase the money supply was that it would have to increase its gold reserves as well. Additionally, as the Fed increased interest rates, countries with fixed exchange rates (pegged to gold) were unable to adjust them appropriately. This created a contagion effect and allowed problems in one place to spread to others. This system was later abandoned in favor of fiat currencies (not tied to gold) and floating exchange rates for this reason.

Of course, simply because the world looks different from the 1930s doesn’t mean a different type of depression couldn’t take place. None of this discussion is to say that the economic system and markets were perfect before this crisis. However, many economists and investors agree that the economy should be able to recover over time. Not only was the economy healthy going into this crisis, but the productive capacity of people and businesses should be little affected if doors can reopen. This is one reason that the stock market has rebounded so strongly since late March.

If the economy can be reopened in a responsible manner, consumer confidence may play an outsized role in the path of the recovery. After all, even if businesses open, economic activity won’t fully resume until workers and consumers feel safe. At the moment, sentiment is at a multi-year low, but not yet at 2008 levels. This is where public health breakthroughs, advances in treatments, and the implementation of sensible policies will have the biggest economic effect. There are good reasons to believe that, although this continues to be a challenging period, U.S. consumers can recover as well.

Below are three charts that help to put this recession in perspective against the Great Depression.

1. Unlike during the Great Depression, the Fed has dramatically increased stimulus measures 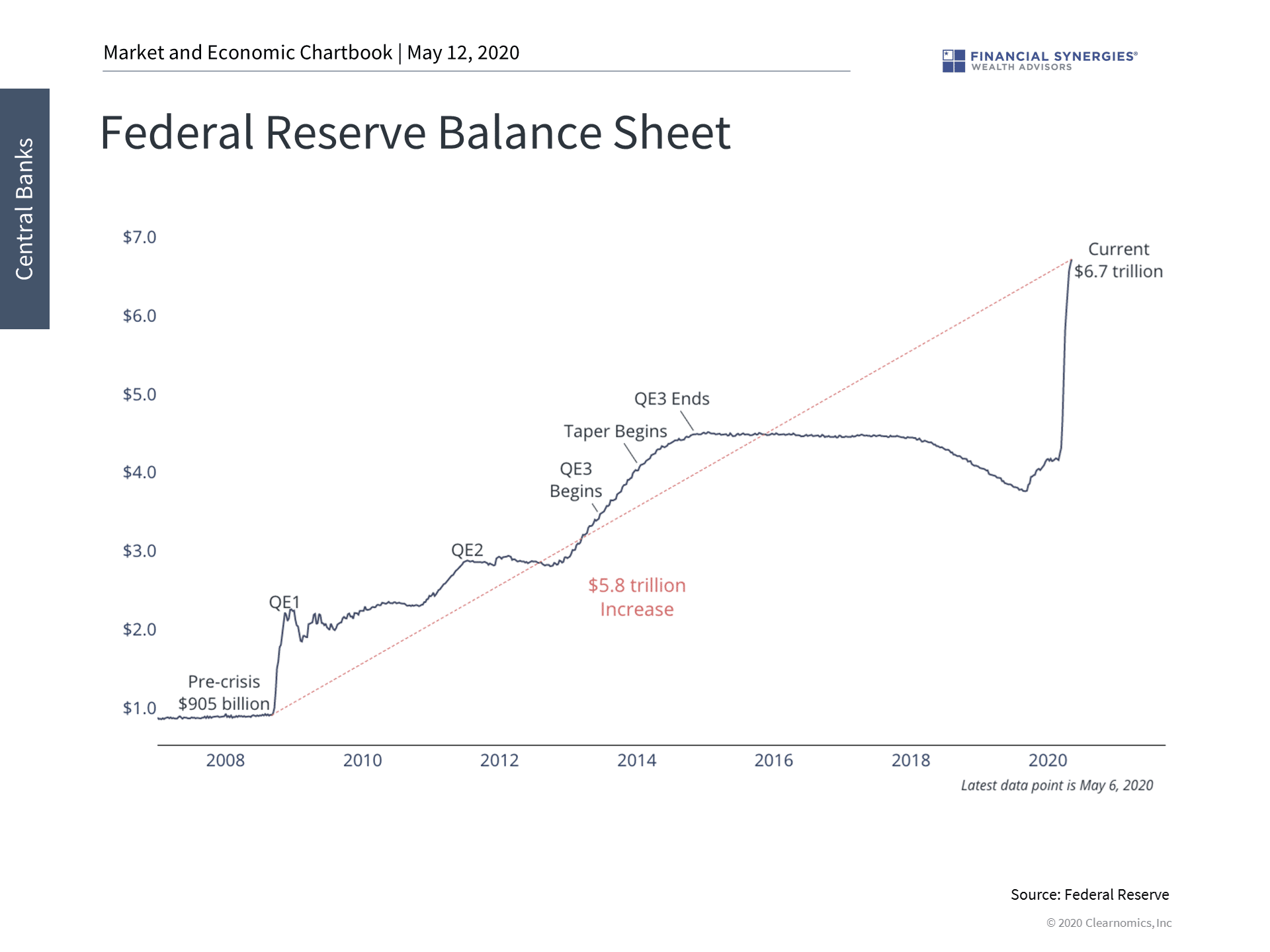 Unlike during the Great Depression, when the Fed was raising rates and allowed the money supply to shrink, today’s central bankers have pulled out all the stops to prevent a liquidity crisis. The Fed balance sheet has skyrocketed from under $4 trillion to over $6.7 trillion in a matter of weeks. The Fed also lowered the federal funds rate to zero in Mid-March and has activated a number of emergency liquidity facilities. 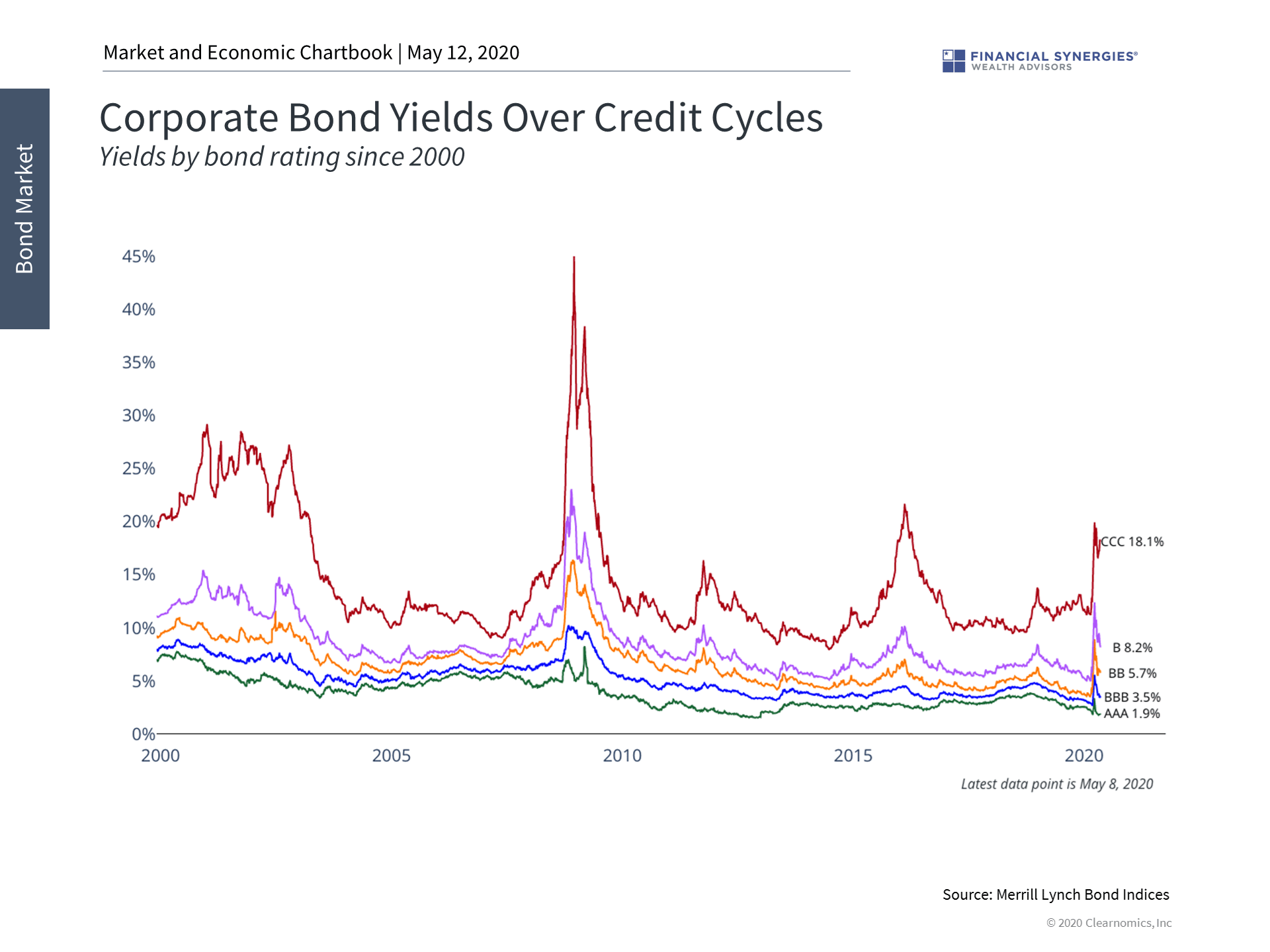 Just as banks, the gold standard, and the foreign exchange rate system were sources of contagion during the Great Depression, so too could credit markets be during this crisis. This was certainly the case in 2008 when financial markets seized up. Although credit spreads did widen significantly in February and March, they have calmed a bit alongside other financial markets.

3. Consumer behavior will determine how quickly the economy recovers 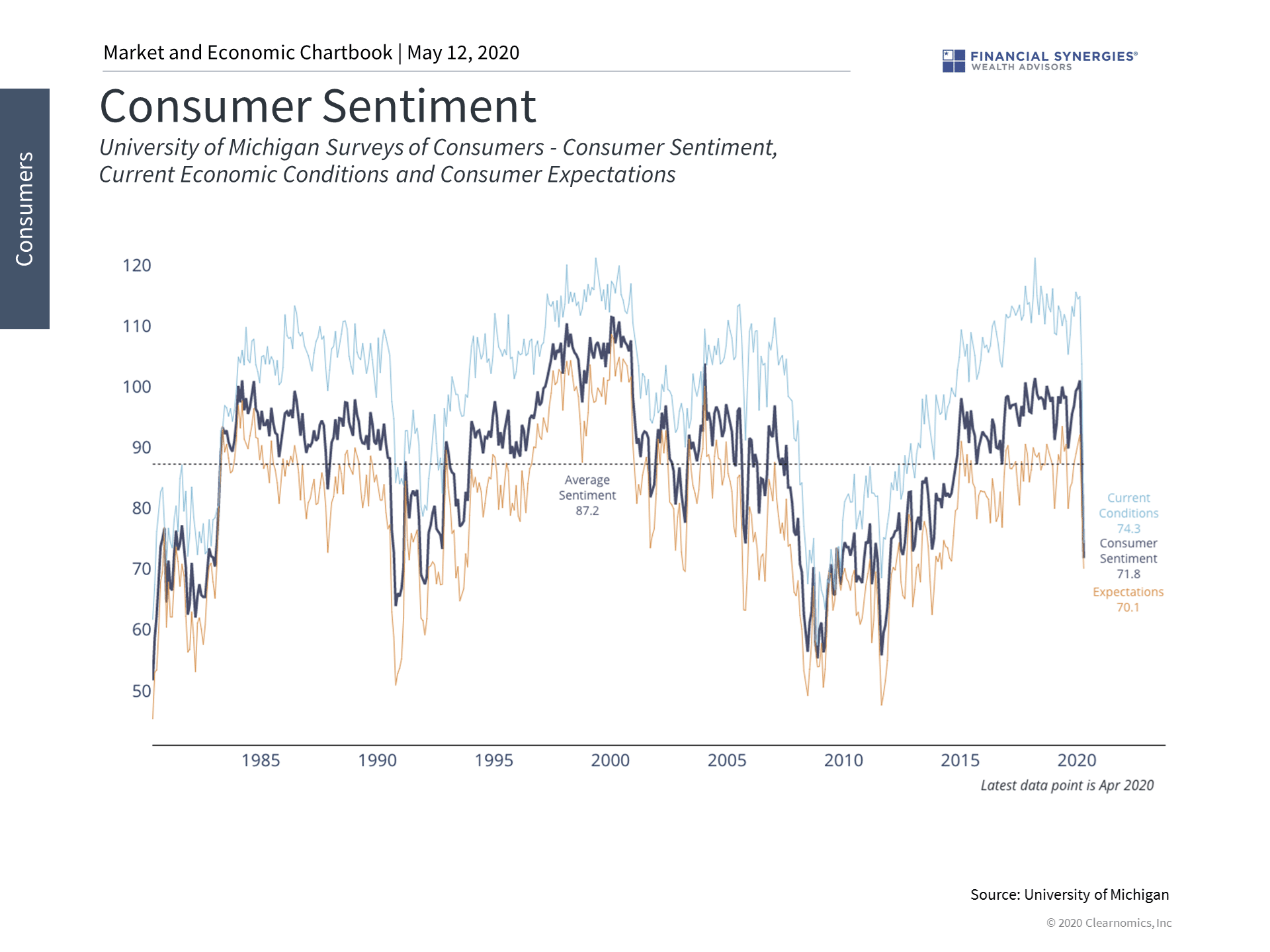 If the economy can reopen in a sensible manner, it will be up to workers and consumers to determine how quickly the economy recovers. Consumer sentiment is at a multi-year low at the moment but is not yet at 2008 levels. In fact, the history of this data suggests that large swings in consumer expectations can occur at any time, but often recover over time even from the biggest shocks.

Today’s situation is quite different from the Great Depression. If businesses can reopen, Americans can return to work, and consumers can become more comfortable as public health advancements are made, then the economy can slowly and steadily get back on track.