To say that the Fed has been a major driver of markets over the past decade would be an understatement. The effects of monetary policy on stocks and bonds have been a defining characteristic of this business cycle. This has been evident when zero-interest rate policy was instituted in 2009, when rate hikes began again in 2015, and when the Fed shifted into neutral earlier this year. With the Fed possibly shifting into reverse over the next several months, what implications will this have?

The Fed has always played a major role in business cycles. Two famous examples include the Great Depression and the “stagflationary” period of the 1970s. During the Great Depression, it can be argued that the Fed failed to ease monetary policy appropriately, especially – and coincidentally – in response to tariffs. It also played an important role in the 1970s when it combated rapidly rising inflation due to, among other factors, the OPEC oil crisis. By raising interest rates, the Fed caused a recession but also managed to wrangle inflation under control.

Today, the economy is decelerating but is still healthy after ten years of steady growth. The unemployment rate is near historic lows, but inflation has yet to take off. While the stock market is by no means cheap, it also isn’t as richly valued as it was during the late 1920s or 1990s. So, while the Fed attempts to make policy decisions on the basis of long-term economic data, it appears to be concerned primarily about shorter-term shocks around global policy risks such as trade.

It’s under this backdrop that the Fed has created a unique market environment. Since 2009, on a total return basis, the S&P 500 has been positive in all but one year (2018). Additionally, it’s been among the best performing asset classes, if not the best, most years. That this has occurred isn’t particularly interesting on its own – there have been plenty of bull markets over history, Fed-induced or otherwise.

What is interesting is that a broad index of U.S. bonds has also been positive every year but one. In fact, it’s been one of the best performing asset classes a few of those years. It was only in 2013, when interest rates rose swiftly (also due to the Fed) that fixed income had a negative year.

A technical way to describe this phenomenon is that stocks and bonds have been positively correlated over this period – that is, prices have moved up and down in tandem. Traditionally, and by their nature, stocks and bonds should tend to move in opposite directions. This matters to investors because a) the Fed’s actions, by boosting the stock market and keeping rates low, has prolonged this period of positively correlated stock and bond returns and b) bad headlines have been met with supportive Fed language. This is the so-called “Fed put” – like a put option, the Fed is helping to support market prices, intentional or not.

Eventually, something will have to give. Stock and bond correlations may re-assert themselves, restoring the traditional tenets of asset class diversification. The Fed may “run out of firepower” either via direct policy tools or a lack of credibility. Or the economic cycle may reach the later stages, a fact that not even the Fed may be able to influence.

Long-term investors needn’t worry too much about this. Staying diversified is the best defense. 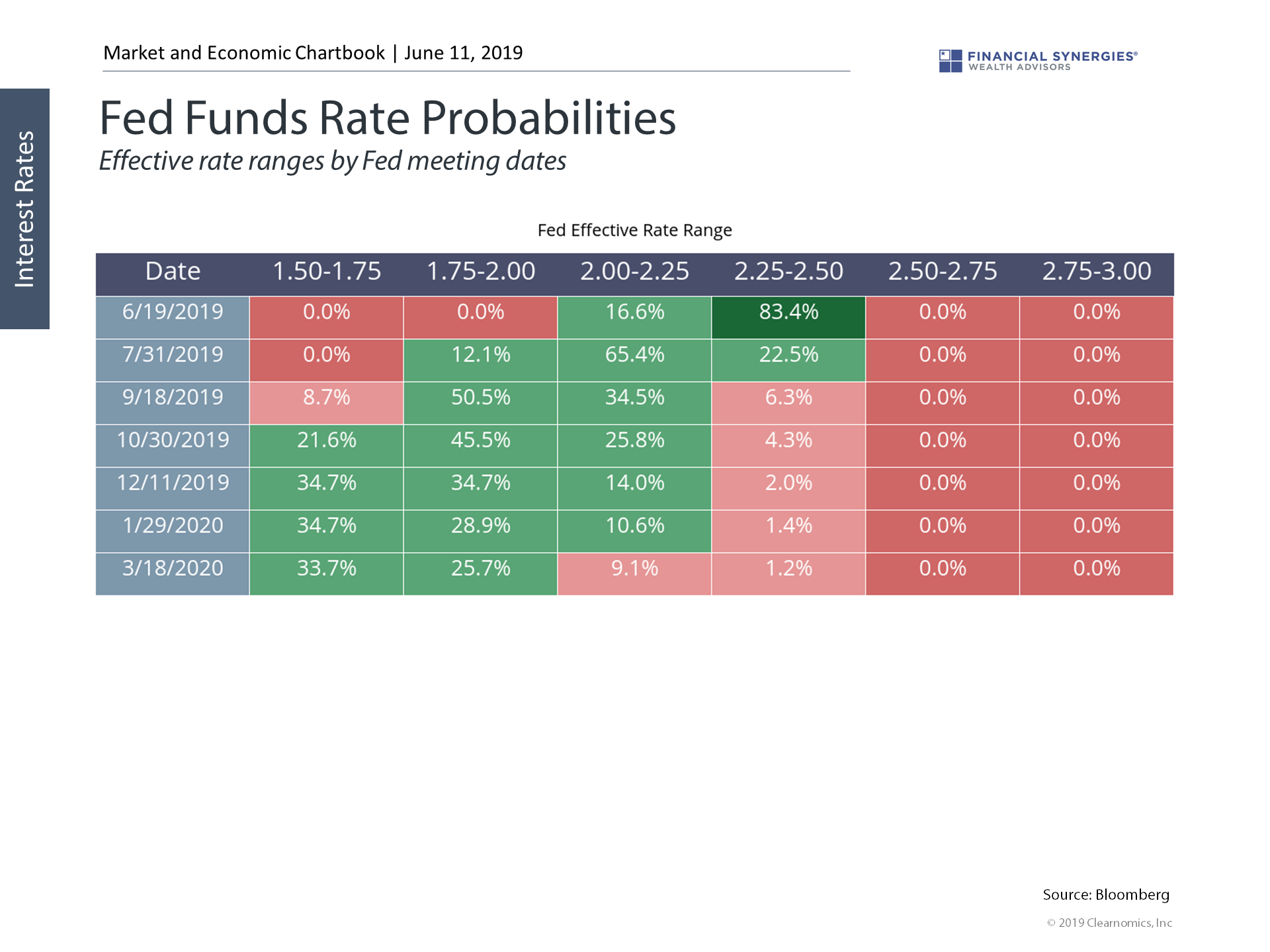 Market probabilities based on fed funds futures are expecting a rate cut in 2019. At the moment, the market overwhelmingly expects a cut by December.

Some market commentary by the Fed is consistent with this view, especially if global headlines including trade tensions continue. However, we should remember that the market has often been wrong about the Fed. Additionally, if trade tensions ease in the coming months, the Fed may shift its tone as well.

In the meantime, easier monetary policy by the Fed has served as a floor on market volatility. 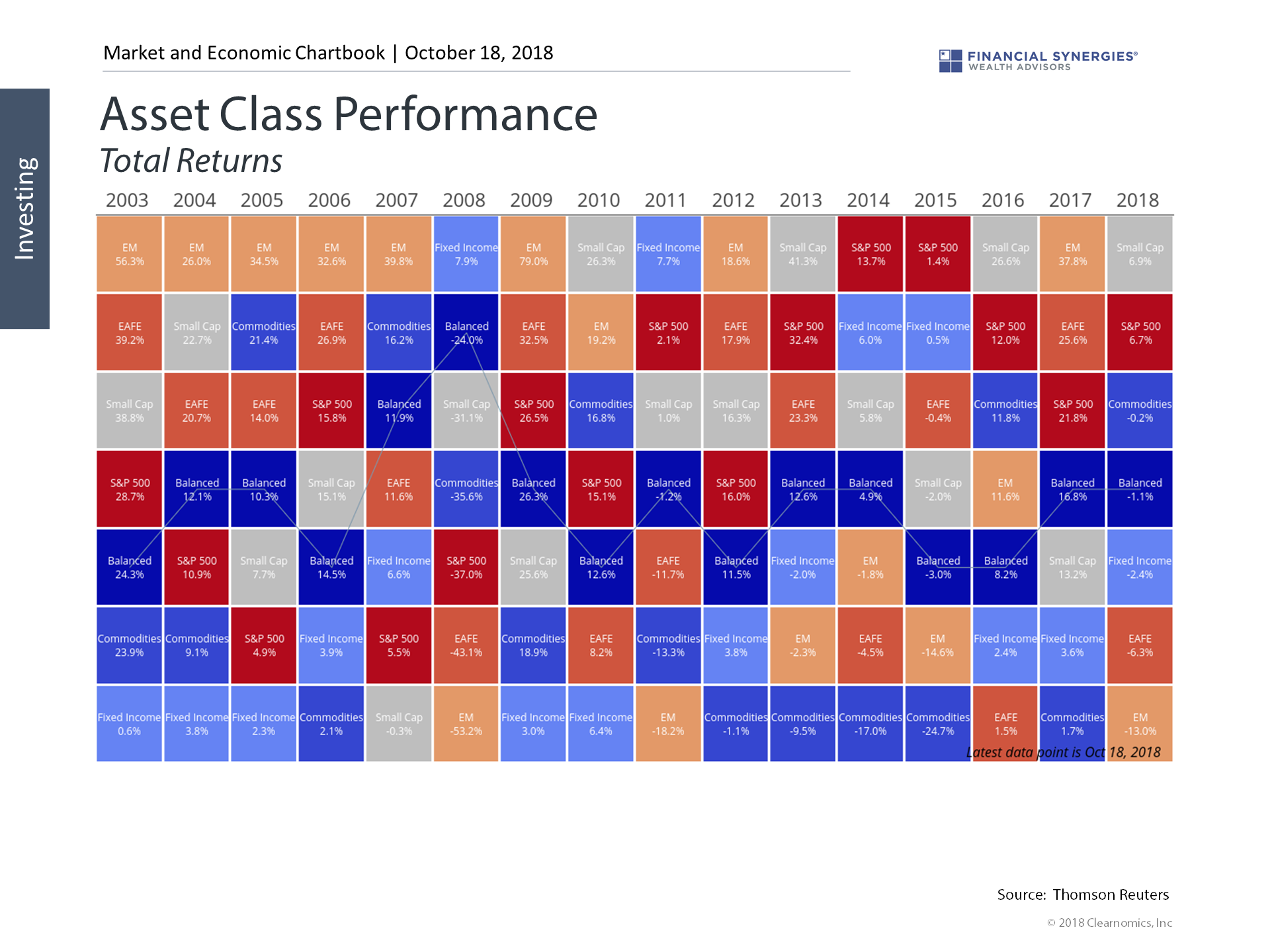 Over the past decade, stocks and bonds have both performed well. The traditional pattern of stock prices rising and bond prices falling – and vice versa – only took place in certain market periods. This was driven by a strong bull market rally and interest rates which have continued to fall.

Eventually, the negative correlation among these asset classes should re-assert themselves.

Disciplined portfolio diversification is needed more than ever 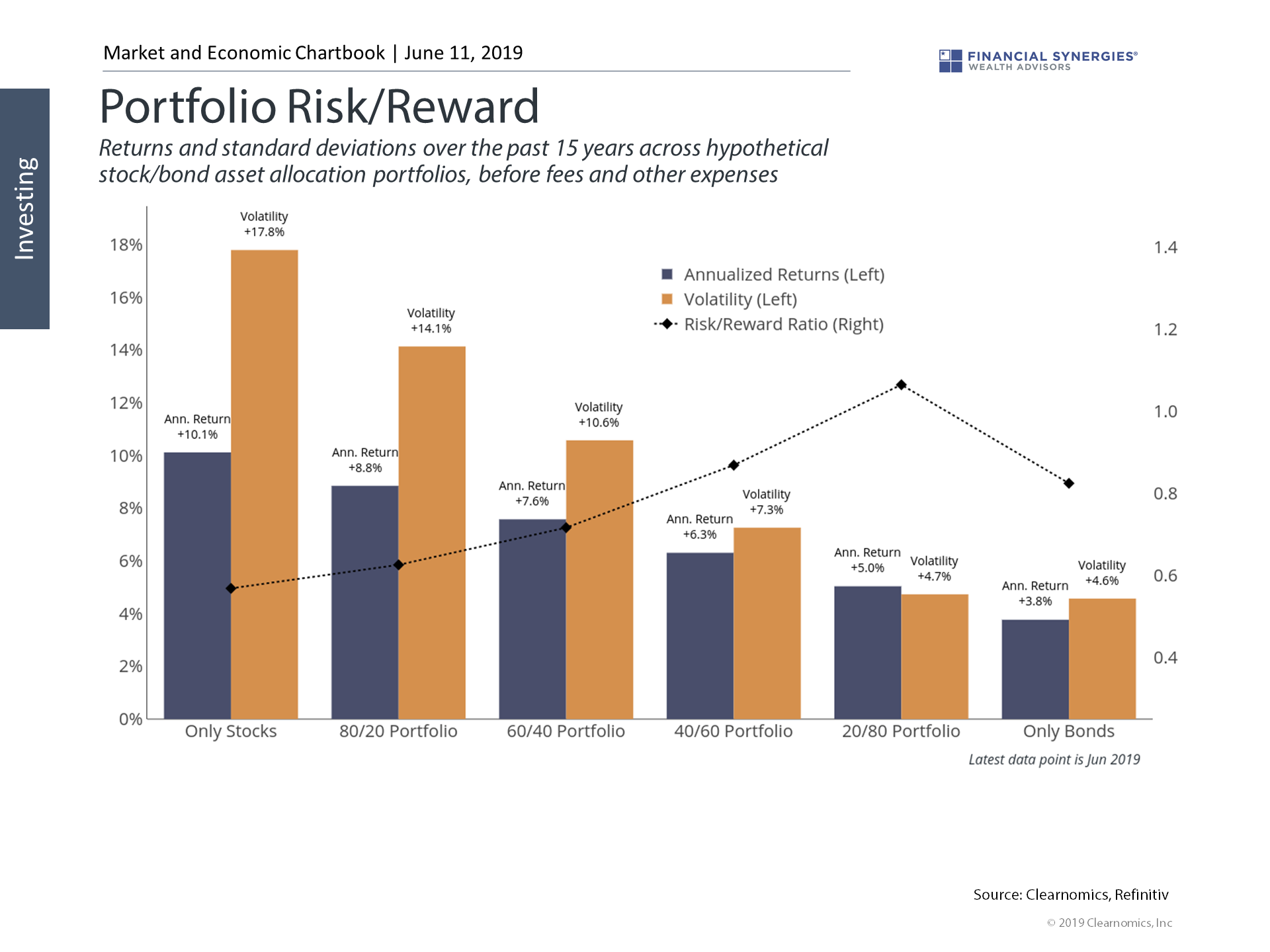 Over the course of years and decades, proper portfolio diversification helps to create a better risk/reward profile. While a diversified portfolio may underperform the overall market – or any individual asset class – in any given year, this is by design. Over long periods of time, the stability of a diversified portfolio is the best tool we have to achieve long-term financial goals.