The first quarter of 2022 was rough, and your upcoming quarterly statements are not going to be any fun to look at. You’ll be seeing red (okay technically we don’t use the color red, but negative numbers).

Inflation, interest rates, supply chain issues, and Ukraine have all taken a toll on the markets. It wasn’t catastrophic, and certainly we’ve had WAY worse quarters in the last twenty years, but it was still unsettling for many investors.

One thing in particular that set this quarter apart from other market declines was the performance of bonds. It’s not often we see bonds going down when stocks are on the decline. It happens, but it’s rare. 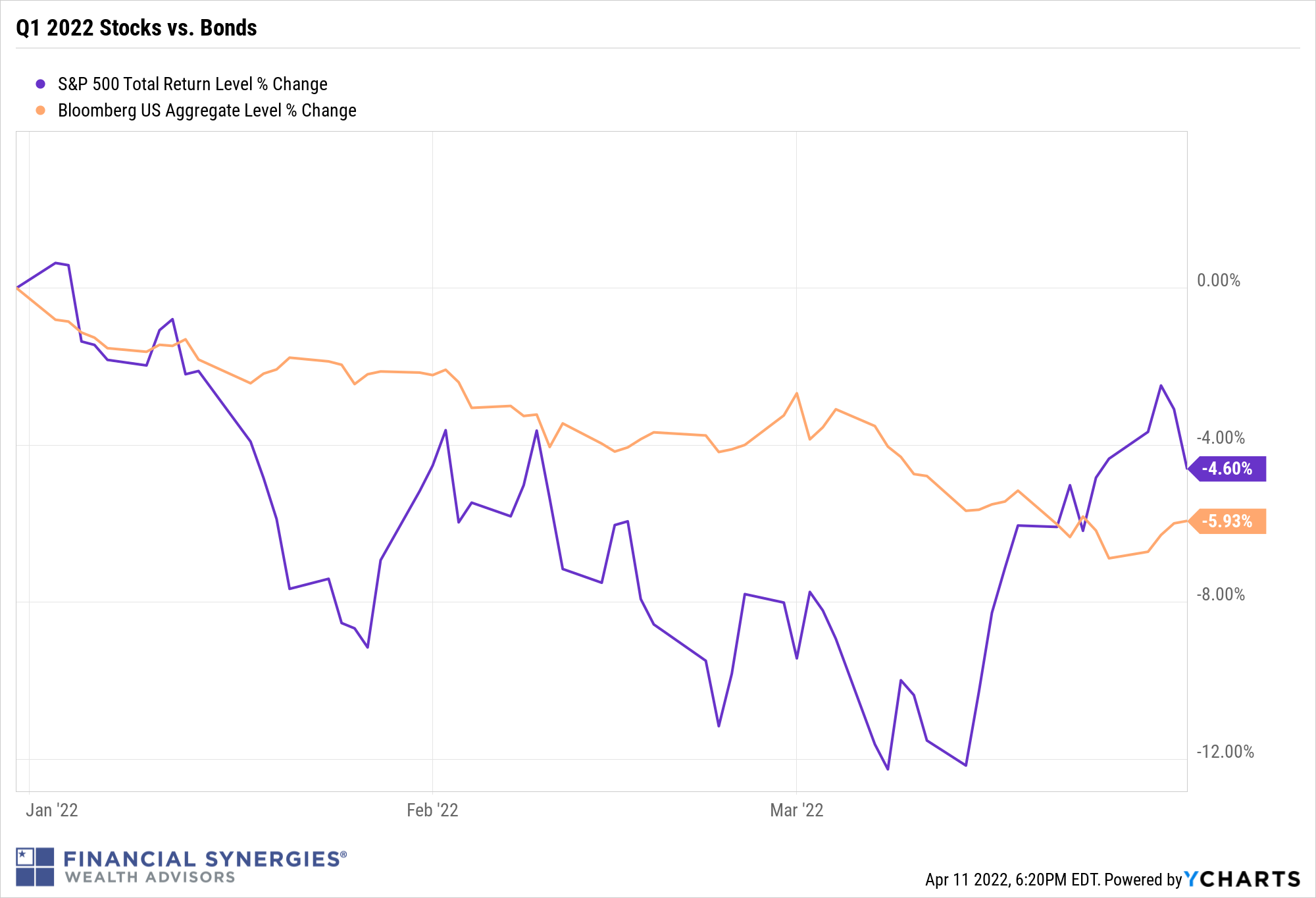 Bonds actually declined more than the broad stock market (S&P 500) during Q1. You can see that stocks still lived up to their reputation as the more volatile asset class, but ultimately bonds lost more.

It’s no secret why bonds are struggling, as we’ve discussed this many times recently. One of the key determinants of bond performance is prevailing interest rates – bond prices have an inverse relationship with interest rates. Obviously rates are on the rise so prices are on the decline.

January 2022 was one of the worst-performing months for the Bloomberg US Aggregate Bond Index (the Agg) during the past 20 years. Much of the blame can be placed squarely on steadily increasing rates. Yields on the benchmark 10-year US Treasury note spiked from 1.49% at the start of the current year to 2.00% in early February.

But remember, bonds by an overwhelming margin usually go up when stocks hit a rough patch. Let’s take a trip down memory lane and revisit some of the worst stock market quarters of the last twenty years. 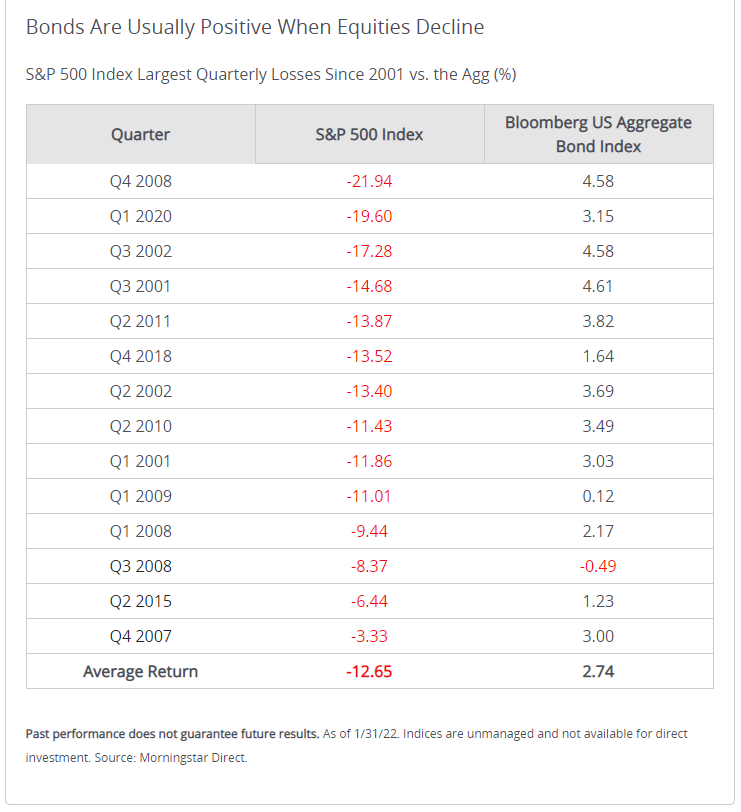 We were glad to own bonds during these turbulent times for stocks. And even though this past quarter didn’t see bonds protecting us as stocks declined, it doesn’t negate the long-term benefits of holding bonds in a diversified portfolio.

And we should be careful not to extrapolate these negative bond returns out into the future and just assume that because rates may go up that bonds will continue to lose money forever. That simply has not been the case historically. More often than not, bonds are in positive territory after a period of rate hikes.

One of the more dramatic rate hike periods was from 2004-2006, when the Fed raised rates 17 times in a row! Bonds were up almost 6% over these two years. And six months after the Fed had raised rates for the 17th time, bonds were up another 5%. *Source: YCharts

Now, I’m not saying that this data guarantees bonds will turn the corner next month and end the year in positive territory. Only that we have to be careful in assuming the worst for bonds going forward.

At the end of the day, bonds are still the ultimate shock absorber against a stock market downturn. And this relationship will revert to its mean eventually.

We know seeing your portfolio down in value is not fun, and can be a source of real anxiety. This is not something we take lightly.

We are invested in the same funds and in the same manner as our clients. In other words, we eat our own cookin.

We are invested in the same funds and in the same manner as our clients. In other words, “we eat our own cookin.” We also know this won’t last forever, and diversification will eventually win the day.

From a strategy standpoint, many of our active bond fund managers have taken the following steps:

These shifts take time to play out, but we feel confident in our positioning going forward.