Returns Have You Scratching Your Head?

If you’ve been paying attention to your portfolio’s performance this year, you may be scratching your head as to why the returns have been lackluster. We get it – we’re invested in the same positions as you. Let’s delve into how our primary global asset classes are performing this year.

With the Dow Jones, Nasdaq, and S&P 500 hitting new highs in 2018, it’s only natural to expect fireworks from your portfolio as well. These domestic indices are the darlings of the financial media, but they are dominated by large-cap U.S. stocks. And because these indices are weighted by market capitalization and price, the growth and more expensive stocks tend to play a much more prominent role.

We have plenty of exposure to these stocks in our core U.S. large-cap fund, and its performance this year coincides with the indices mentioned above. But that is only one asset class of our globally diversified portfolios. We have exposure to large-cap value stocks, small-cap blend and value stocks, developed international stocks, emerging markets stocks, bonds, U.S. and international real estate.

Outside of the core U.S. large-cap and small-cap asset classes (up 10.09% and 8.29%), it’s been a different story this year. Let’s break down the 2018 YTD performance of the other broad-based asset classes we invest in, and then compare that to their 2017 and 2016 performance. 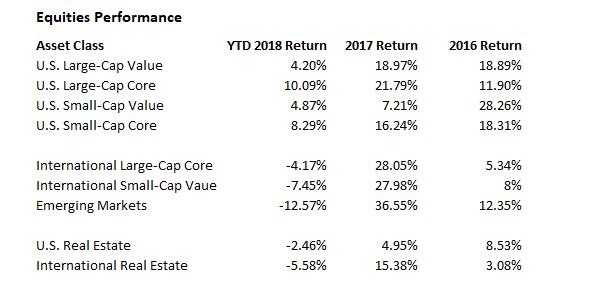 It’s clear from the performance numbers that value stocks, international stocks, and real estate are all detracting from performance relative to U.S. large-cap and small-cap core stocks in 2018. The reason that I’m pulling in the returns from 2017 and 2016 is to illustrate how quickly things can flip-flop.

You’ll notice that last year our international stocks dominated the domestic stocks, and in 2016 value stocks dramatically outperformed the core stocks. This is the natural ebb and flow of global diversification. And no one ever knows from year to year what asset classes are going to be in favor (not even the “gurus”). Therefore, we stay globally (and fully) diversified at all times.

Now on to bonds. This broad asset class has really thrown investors for a loop this year. We’re not used to seeing bond positions across the board in the red. But that’s exactly what’s happened in 2018. It’s nothing dramatic – the worst performance of any of our bond positions in 2018 is around -2%. But, when you have a large chunk of your portfolio in an asset class with negative returns, it’s going to drag down your overall performance significantly.

So, what’s going on with bonds? It’s simple really, as the Fed’s rate increases have made their way into bond yields, that has put downward pressure on bond prices. The reason the Fed is continuing to raise rates is because the economy is booming and now is the time to return to a normal rate environment.

I’ll admit it’s been a frustrating year for diversification. But we’re not concerned about value vs. growth, U.S. vs. international, or negative returns in bonds, in the short-term.

Value and growth stocks will flip-flop from time to time, but we expect value stocks to outperform over the long-term. International stocks are in a different stage of economic recovery, and the stronger dollar relative to these international currencies has also played a major role in their decline. We’ve been buying into these positions as they’ve declined. Relative to U.S. stocks, they are much cheaper and thus have a higher expected return going forward.

As far as bonds, it’s just going to take some time for the bond markets to adjust to a higher rate environment. We’ve been through periods of rising rates before, and eventually bonds will recover. Our primary philosophy for allocating to bonds has not changed. We invest in them to provide a buffer from stock market downturns, while earning a positive return above inflation.

None of what has occurred in 2018 has changed our stance on our core investing tenets. And who knows where things might end up by Christmas!

Disclosure: the return data used in this article is pulled from our primary funds. Not all clients are necessarily invested in these exact positions.