Well, there’s no getting around it – this was an ugly week on Wall Street. After a period of relative calm in the markets, in recent days the increase in volatility in the stock market has resulted in renewed anxiety for many investors.

Stocks sold off sharply, sending the S&P 500 lower by 4.1%. Fears over potentially weakening economic and earnings growth helped fuel the selling, which left stocks at three-month lows going into the third quarter earnings season. The Dow Jones Industrial Average lost 4.2% this week, and the tech-heavy Nasdaq Composite fell 3.7%. On a positive note, the major U.S. indices were all significantly up on Friday.

The International Monetary Fund (IMF) cut its 2018 and 2019 global growth outlook to 3.7% from 3.9% on Tuesday, citing trade uncertainties that include tariffs between the U.S. and China, a pending Brexit deal, and the new trilateral agreement between the U.S., Canada, and Mexico that’s supposed to replace NAFTA.

On a related note, President Trump and Chinese leader Xi Jinping have reportedly agreed to meet at next month’s G-20 summit with hopes of resolving their trade conflict.

President Trump blamed this week’s selling on the Federal Reserve, which he says has “gone crazy” with its rate hikes. The Fed has raised rates three times this year with the most recent hike coming in September, and it appears to be on track to raise rates again at its December meeting.

Also of note, the CBOE Volatility Index (VIX), often referred to as the “investor fear gauge,” touched its highest level since late March (28.64) before pulling back a bit on Friday. Still, the VIX finished the week roughly 40% higher.

Weeks like this can leave many investors wondering what the future holds and if they should make changes to their portfolios. While it may be difficult to remain calm during a substantial market decline, it is important to remember that volatility is a normal part of investing.

“Additionally, for long-term investors, reacting emotionally to volatile markets may be more detrimental to portfolio performance than the draw-down itself.” 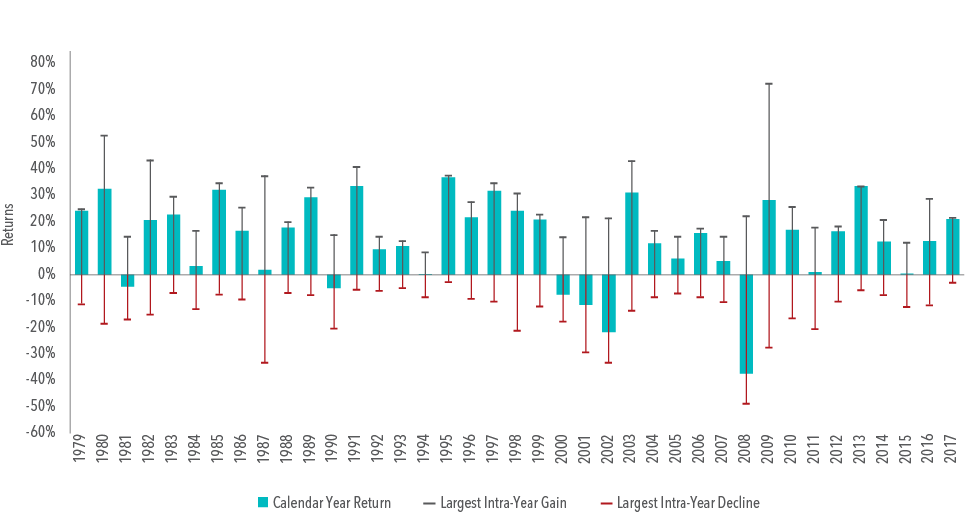 If one were to try and time the market in order to avoid the potential losses associated with periods of increased volatility, would this help or hinder long-term performance? If current market prices aggregate the information and expectations of market participants, stock mispricing cannot be systematically exploited through market timing. In other words, it is unlikely that investors can successfully time the market, and if they do manage it, it may be a result of luck rather than skill.

Further complicating the prospect of market timing being additive to portfolio performance is the fact that a substantial proportion of the total return of stocks over long periods comes from just a handful of days. Since investors are unlikely to be able to identify in advance which days will have strong returns and which will not, the prudent course is likely to remain invested during periods of volatility rather than jump in and out of stocks. Otherwise, an investor runs the risk of being on the sidelines on days when returns happen to be strongly positive.

Exhibit 2 helps illustrate this point. It shows the annualized compound return of the S&P 500 Index going back to 1990 and illustrates the impact of missing out on just a few days of strong returns. The bars represent the hypothetical growth of $1,000 over the period and show what happened if you missed the best single day during the period and what happened if you missed a handful of the best single days. The data shows that being on the sidelines for only a few of the best single days in the market would have resulted in substantially lower returns than the total period had to offer. 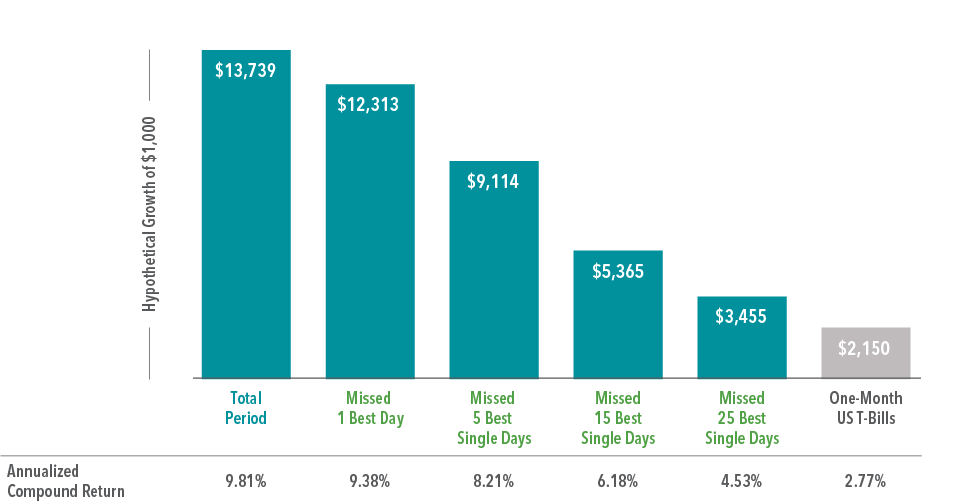 For investors, weeks like this just plain suck, and it very well may get worse before it gets better. But reacting emotionally and changing long-term investment strategies in response to short-term declines could prove more harmful than helpful. And let’s remember that the economy is still extremely healthy. The rise in interest rates, as painful as that can be, is a signal that things are still improving.