Oil on the Rise

In 2014, oil prices collapsed from over $100 to below $30 two years later. Recently, oil has quietly crept back into the news as it hits $70. This recovery has been driven by both supply and demand. Production cuts by OPEC, shifts in U.S. production, and strong global economic growth have all resulted in a rebound in global oil prices. This is a topic that has affected all investors over the past several years, whether they realize it or not.

Why does the price of oil matter to all of us, even though few of us spend our days trading oil futures? Simply put, there is no more important basic resource to the global economy. The world consumes close to 100 million barrels per day. The energy sector constitutes nearly 6% of the overall S&P 500. Energy overall makes up nearly 8% of the CPI basket used to calculate inflation. Thus, not only does energy play a big role in the markets and economy, significant changes in oil prices can have ripple effects beyond energy itself.

Case in point: the oil price collapse that began in 2014 resulted in a series of problems for the stock market and economy. Energy stocks fell dramatically, due in no small part to a collapse in corporate earnings as oil fell below $30. Inflation expectations also declined, impacting economic forecasts and interest rates. This may have even impacted Federal Reserve policy.

The good news is that consumers benefited from low energy prices, since paying less on gasoline and heating bills meant more money in their pockets. Similarly, the rebound in oil prices could eventually put a damper on consumer spending. We’re probably not quite there yet – this could still represent a “Goldilocks” period in which oil prices benefit both companies and consumers.

Thus, the price of oil is an important gauge of the health of the market and economy. 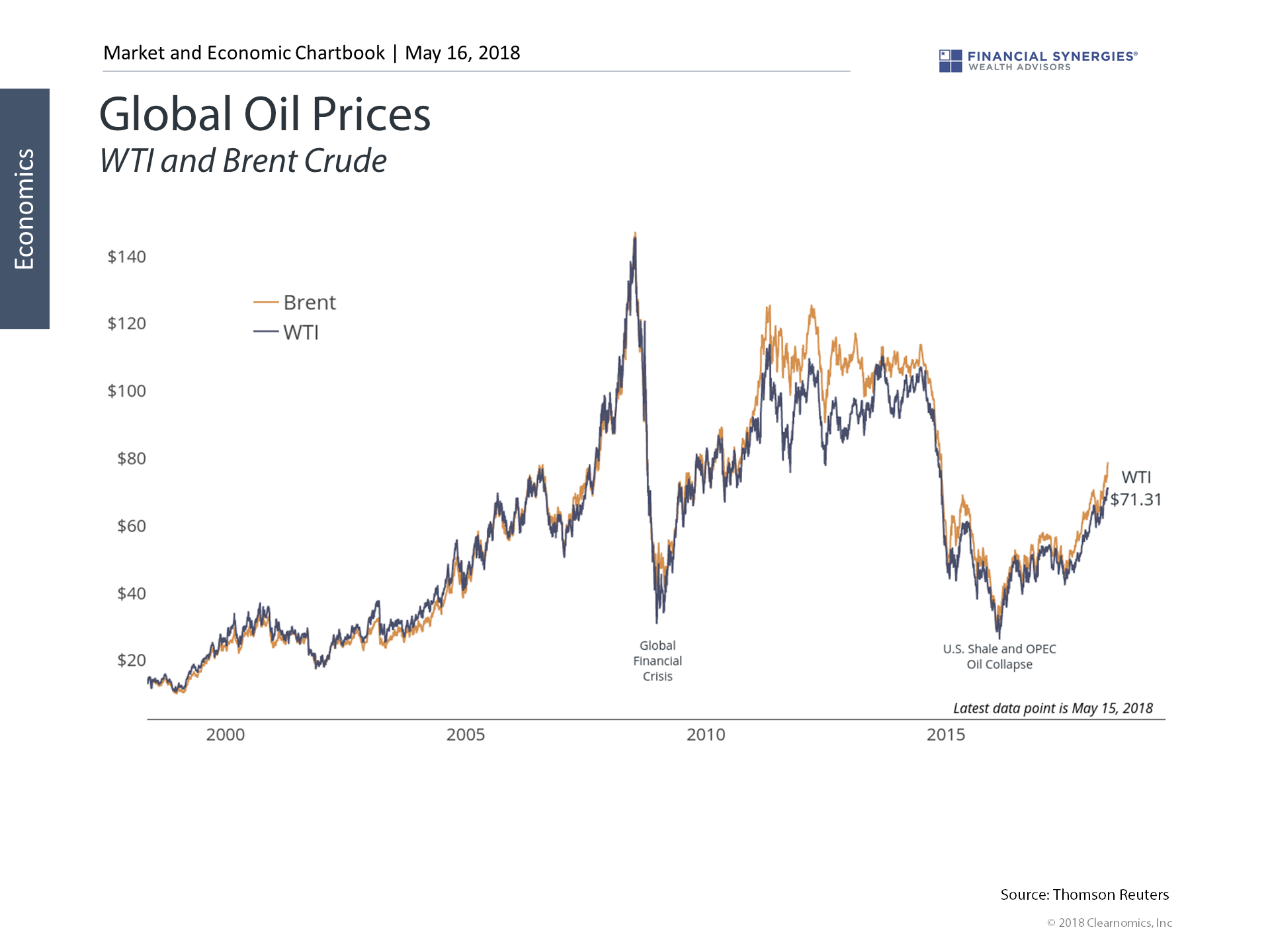 Oil has faced two big boom-bust cycles over the past twenty years. Oil prices increased dramatically during the housing bubble, climbing to $140, which also pushed the average price of gasoline in the U.S. to over $4. It collapsed during the global financial crisis, but then rebounded as the economy recovered. New technologies such as hydraulic fracturing and horizontal drilling unlocked U.S. oil production, which ultimately resulted in a supply glut and another collapse in oil prices beginning in 2014.

Since then, several supply and demand factors have worked to boost prices. OPEC and other large oil producers agreed to broad production cuts. The U.S. energy industry has transformed itself into a low-cost and arguably swing producer, and is on its way to overtaking Saudi Arabia and Russia in crude production. Meanwhile, global demand continues to increase.

If these trends continue, oil prices are likely to remain higher from here. This could have several implications for stocks and the economy, which we’ll explore next. 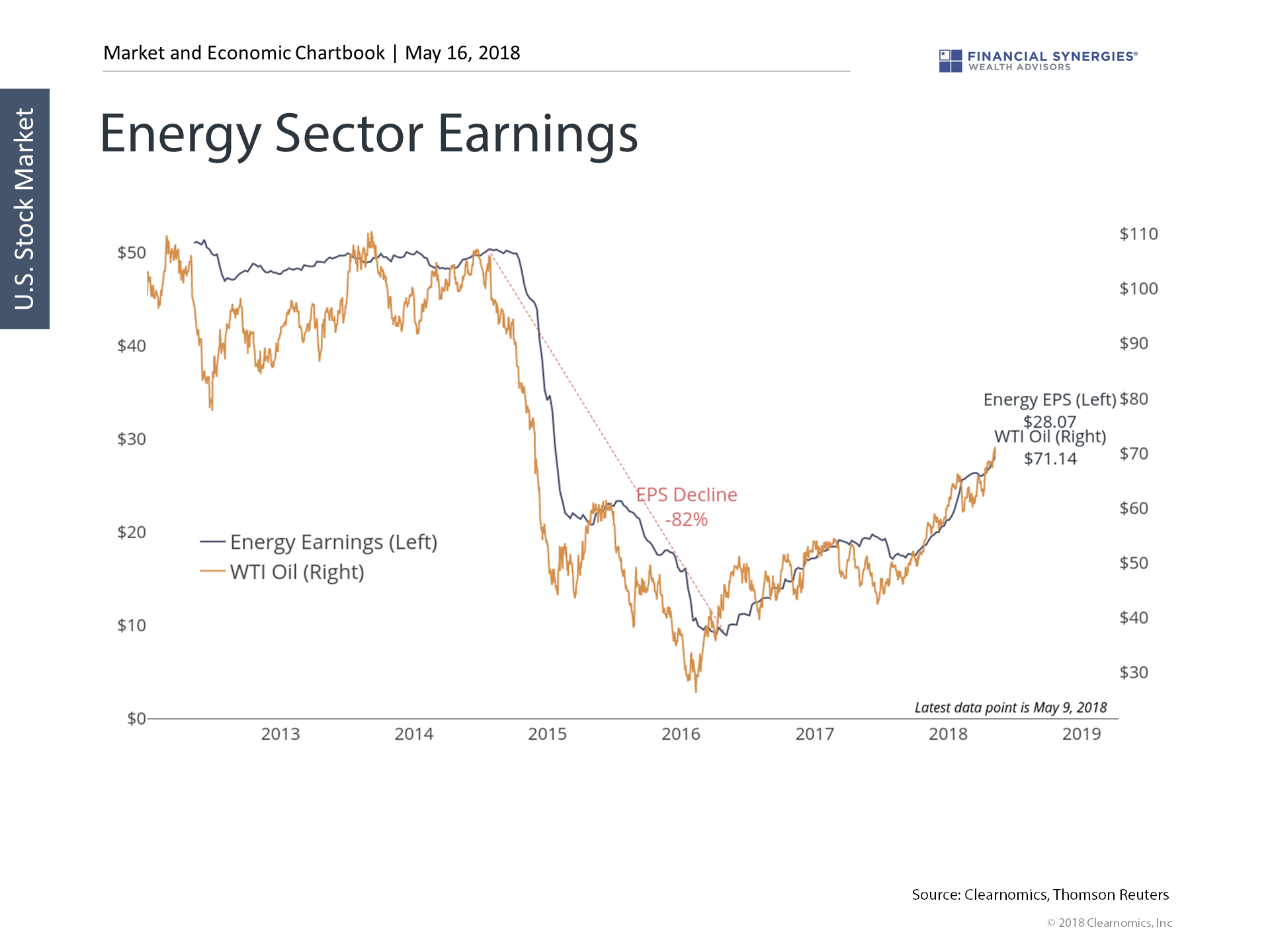 The oil price collapse that began in 2014 resulted in a crash in energy stocks. This reverberated across the stock market, causing an “earnings recession” – corporate earnings were stagnant for about two years.

The chart above shows the impact on energy sector earnings. From peak-to-trough in energy prices, the sector’s earnings-per-share declined by over 80%. By essentially wiping out one sector’s earnings, it’s easy to see that this would have dented the earnings of the entire S&P 500 regardless of how other sectors performed.

The recovery in oil prices is now having the opposite effect: it’s helping to boost already-strong S&P 500 earnings. While we may not see the earnings growth experienced during the shale boom, this is likely to be positive for markets for some time. 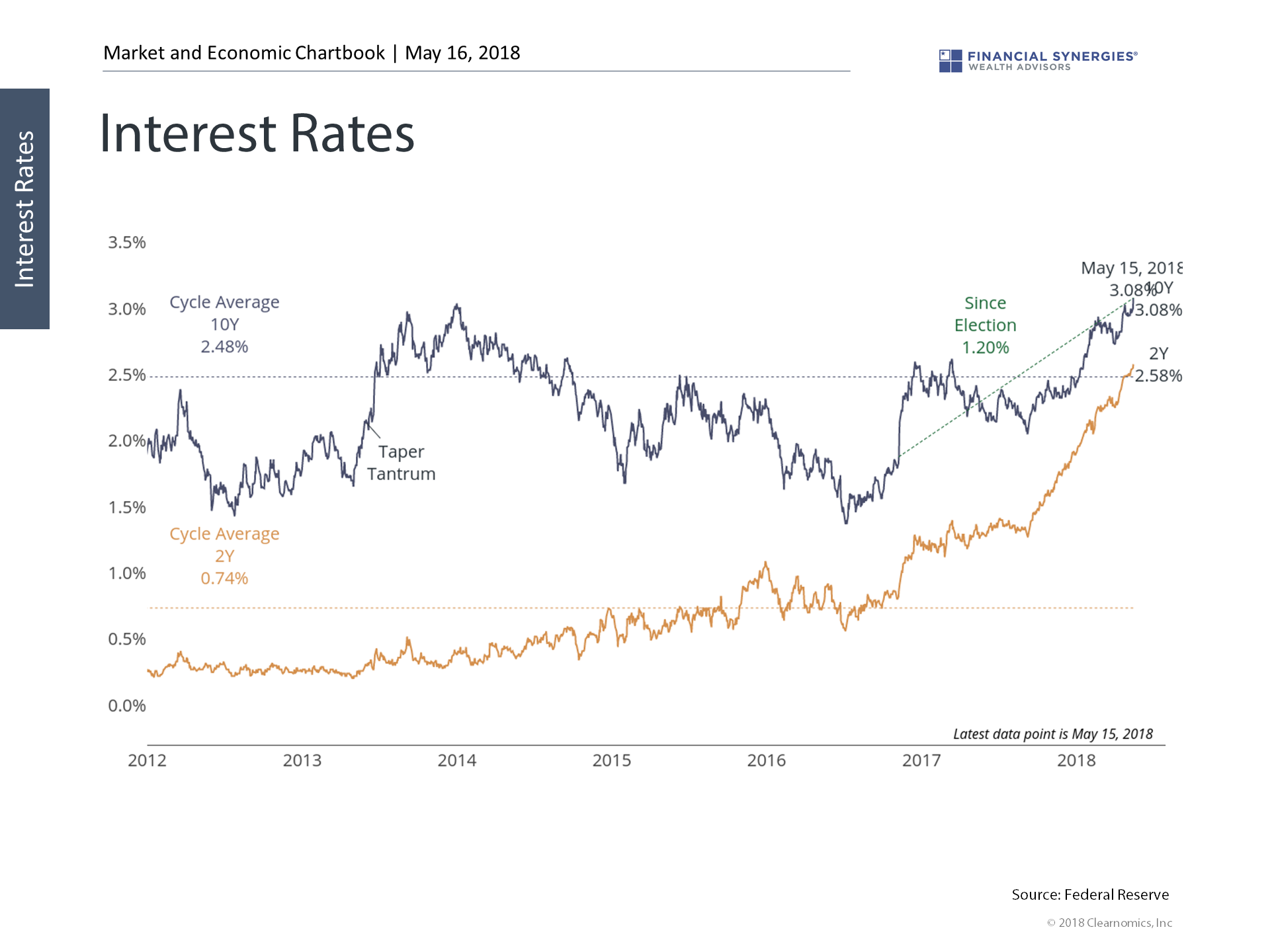 Rising oil prices help to push up inflation expectations, which in turn pushes up interest rates.

As shown in the chart above, the 10-year Treasury yield is now approaching 3% for the first time since 2013. At some point, interest rates may rise to a level that slows the economy.

At the moment, however, rising rates are likely to be a positive signal, suggesting that global growth is still strong and the U.S. economy still healthy. And while we don’t expect rates to rise in a straight line, higher interest rates should be positive for many investors.