A word about the GameStop (GME) frenzy: Market volatility continued today as the battle between the GME hedge fund short-sellers and individual traders raged on. Short-sellers are mostly holding on to their positions or they are being replaced by other hedge funds willing to bet against the stock. The buyers are holding their ground too – shares of GME spiked on Friday (+68%) once again after Robinhood said it was resuming limited trading of the previously restricted shares (basically they were only allowing some stocks to be sold, but not purchased). Sound illegal? *Although it still severely limited buying in GME to just five shares or ten options contracts. Kind of a joke.

Folks, this is turning into an epic David vs. Goliath battle. This story has garnered worldwide attention and politicians on both sides of the aisle are calling for congressional investigations into Robinhood’s actions. This might be the first truly bipartisan issue in like ten years – Republicans and Democrats actually appear united on this. Robinhood is going to have a lot of explaining to do. 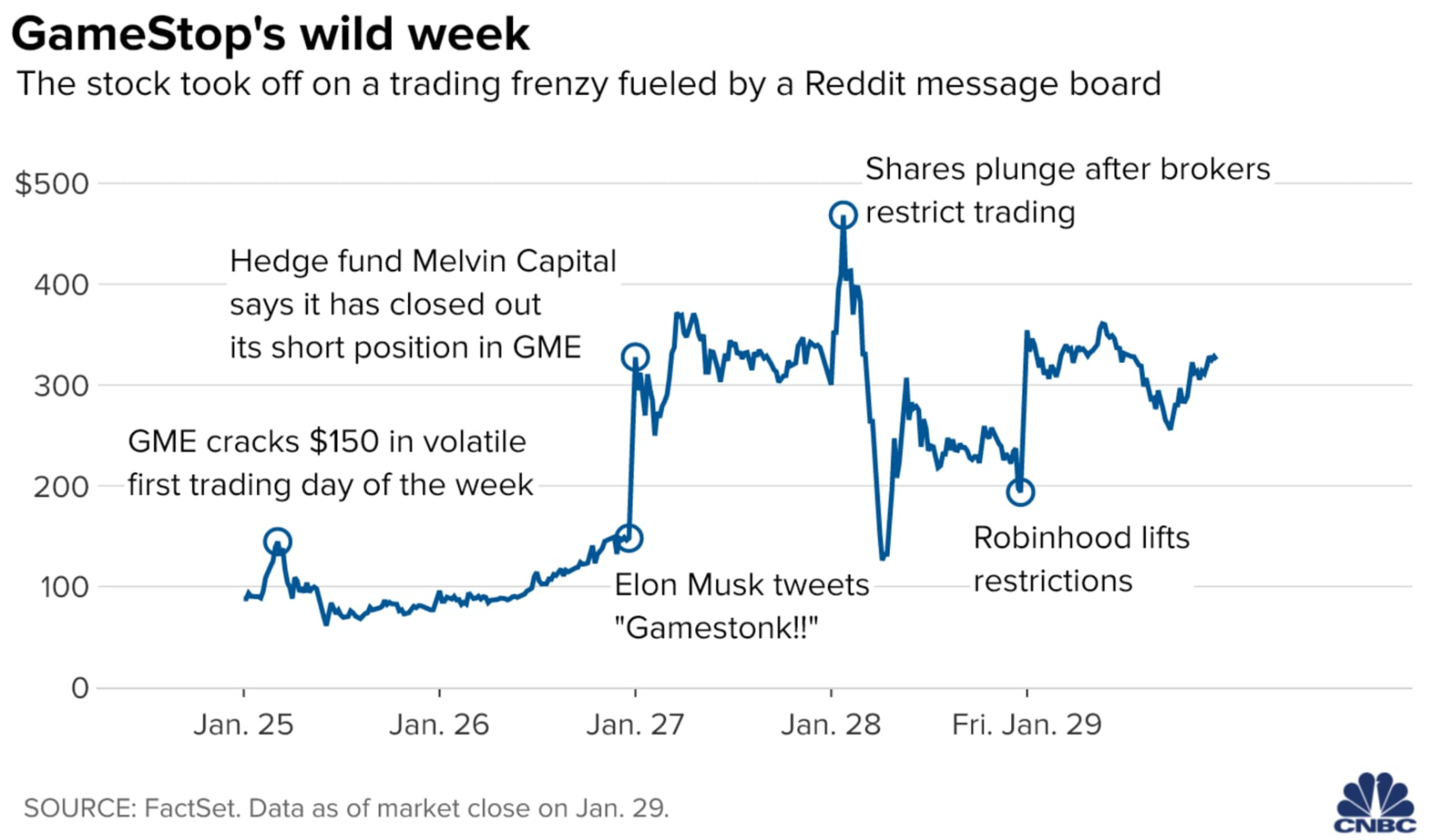 It would be easy to blame the market drop this week all on the “short squeeze” drama. I don’t think that’s the case. Surely it did contribute to the decline, but market downturns are usually not just about one thing. The reality is that stocks have been on a tear since the early fall of 2020. A pullback is inevitable. We also got some disappointing news about Johnson & Johnson’s coronavirus vaccine – it is much less effective than we had all hoped. And the recent economic numbers haven’t exactly been stellar. To top it off, President Biden’s $1.9 trillion stimulus deal may not come anytime soon.

All of this will eventually be digested and the market will get back on track. And on a brighter note, this week’s corporate earnings were much better than expected. Ok, now on to the standard weekly recap.

To begin, GameStop (GME) entered the week at $65 per share and peaked at $483 per share later in the week, as it became the poster child for the short-squeeze mania/rebellion against short sellers. Things got so wild that brokerage firms restricted trading activity on heavily-shorted stocks like GME, which sent these stocks lower and drew the ire of many market participants.

These brokerage firms eventually eased some restrictions, allowing users to resume buying and push these stocks higher at the end of the week. GME shares ended the week higher by 400%. This volatility unnerved the market for multiple reasons, including concerns about fund managers selling long positions to cover their shorts and, for some, the potential for increased regulation.

The drama fixated the market and took away from the batch of better-than-expected earnings reports, including from leading companies like Apple (AAPL), Microsoft (MSFT), Facebook (FB), and Tesla (TSLA). To be fair, MSFT shares did gain 2.7% this week.

All 11 S&P 500 sectors closed lower. The energy sector was the weakest link with a 6.6% decline. On the other end was the real estate sector with a modest 0.2% decline.

In other developments, Fed Chair Powell delivered a dovish-sounding post-FOMC press conference, reports suggested that President Biden’s $1.9 trillion stimulus deal could be pushed back to mid-March due to bipartisan objections, and fourth quarter real GDP increased at an annualized rate of 4.0% despite a challenging macroenvironment.

For what it’s worth, the S&P 500 set an intraday all-time high early in the week and ended the week marginally below its 50-day moving average (3716). The 10-yr yield was unchanged at 1.09% despite the market volatility.