Inflation Can Be Managed

Economics is often called the “dismal science” in part because of its poor track record at making predictions. Perhaps the biggest reason for this is the difficulty in determining whether something is a new trend or a temporary event. This has been the case for inflation forecasts not only over the past two years, but since at least the global financial crisis. What’s different this time is that rapid inflation is rattling markets and consumers alike. How should investors adjust to a world of rising prices for the first time in decades?

Last week’s Consumer Price Index showed that headline inflation grew by 6.8% in November compared to a year earlier, and 4.9% when food and energy costs are excluded. This is more evidence that prices could rise faster than expected for some time. Nearly all components of the index contributed to higher prices, including the cost of energy, cars and meat. This is the fastest rate of price increases in nearly four decades and an acceleration from last month’s reading of 6.2%.

For many, including the Fed, the defining word for inflation has been, until recently, “transitory.” Unfortunately, this has two interpretations. Transitory can be taken to mean “short-lived,” i.e., lasting only a few months or quarters, or “temporary” meaning that the effects are due to a one-time event and will eventually fade. And while these definitions are related, they have different implications for the global economy.

There are a couple points of irony here. The first is that the Fed’s biggest historical success is arguably its handling of the 1970s and early 1980s stagflationary period. By using their interest rate tools, the Fed was able to control inflation, with recessionary side effects.

The second is that the inflation pressures that many feared following the 2008 financial crisis never materialized. There are a number of reasons for this including the deflationary effects of technology and globalization, which make goods more cheaply available, in addition to more arcane details such as the Fed paying banks interest on excess reserves, which increased the incentive to keep money parked at the central bank rather than lending it into the system.

Whatever the reasons, this time is undeniably different. While the long-term deflationary forces are still here, they are overpowered by the near-term effects of the pandemic, supply chain disruptions, excess demand for goods and services, and rising energy prices. This is making it difficult to predict exactly when inflation might subside. And, even when it does, it may remain above historical averages especially when compared to recent history.

Still, unless the underlying economy were to fundamentally change, it is the case that these effects are “temporary” in nature. This doesn’t necessary mean that they will fade quickly. But, like the old quote puts it, “if something cannot go on forever, it will stop.”

Where does that leave consumers and investors? Rising inflation has already soured the mood among households with near-term inflation expectations jumping and consumer sentiment plummeting. However, consumers are still spending and household balance sheets are still in a strong position.

Unlike the 1970s when the economy was contracting and the job market was shrinking, inflation today is rising alongside a robust economic expansion.

It continues to be important to stay diversified and to hold assets that can adapt to evolving inflationary environments. Many asset classes that investors already own have these properties including stocks, commodities and real estate, to name but a few. Large cap companies, for instance, tend to have pricing power and can therefore adapt over time. Although we don’t invest directly in commodities, many of the companies we invest in derive most of their revenue from commodities.

Rising inflation may push up interest rates which makes bond investing challenging, but these trends in rates have occurred in fits and starts. If any asset class is vulnerable in these periods, it’s plain ole cash. Rising prices erode the value of cash holdings, underscoring the importance of investing in appropriately diversified portfolios for both return and income.

Below are three insights that can help investors understand what longer-lasting inflation may mean.

1. Inflation is the highest in almost 40 years 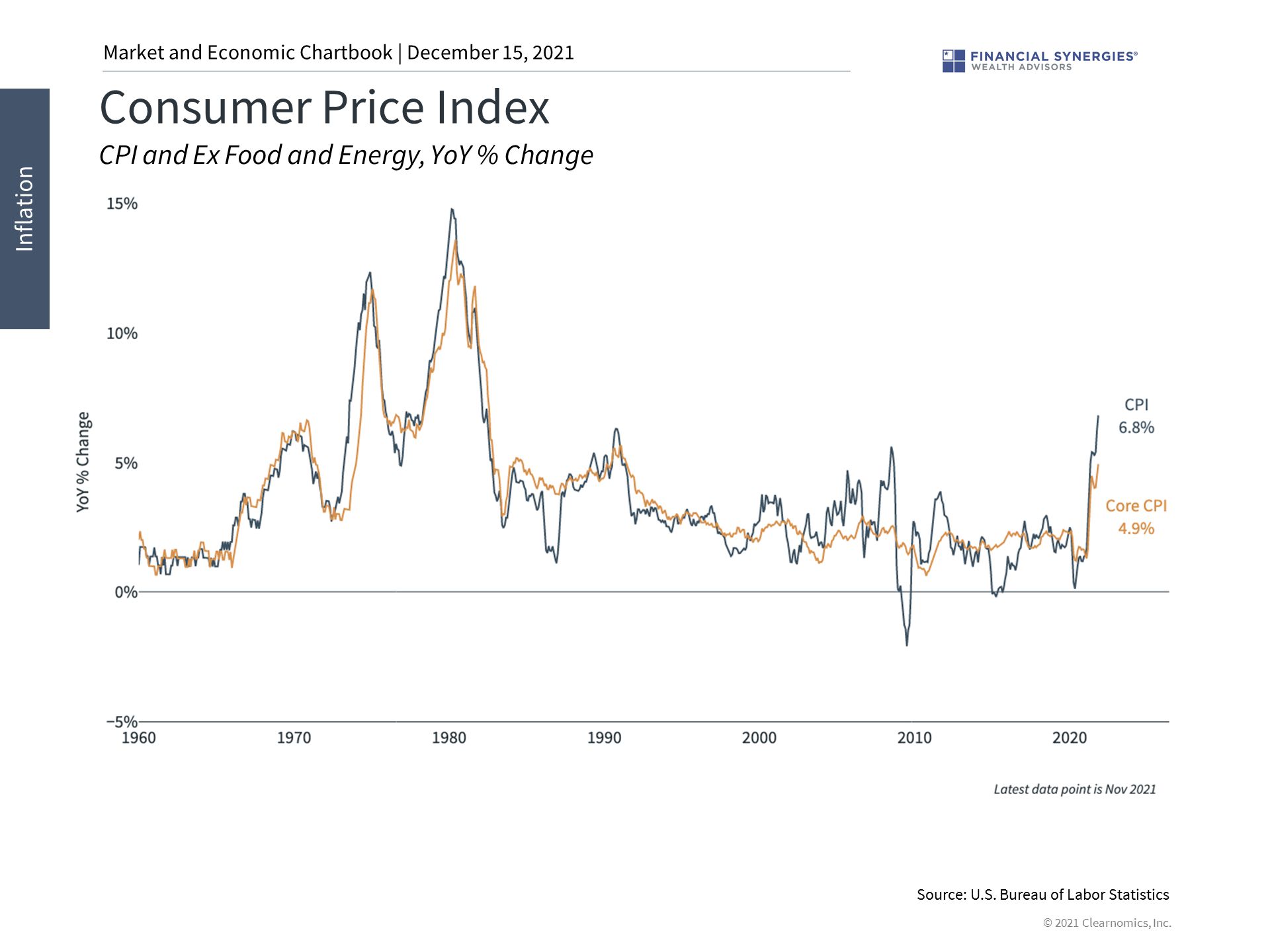 Last week’s CPI reading shows that consumer inflation is the highest since 1982. Much of this increase is due to food and energy prices. However, even Core CPI has reached 4.9% – well above the notional 2% target that the Fed and other economists consider to be healthy.

2. Markets expect inflation to stay high in the near-term 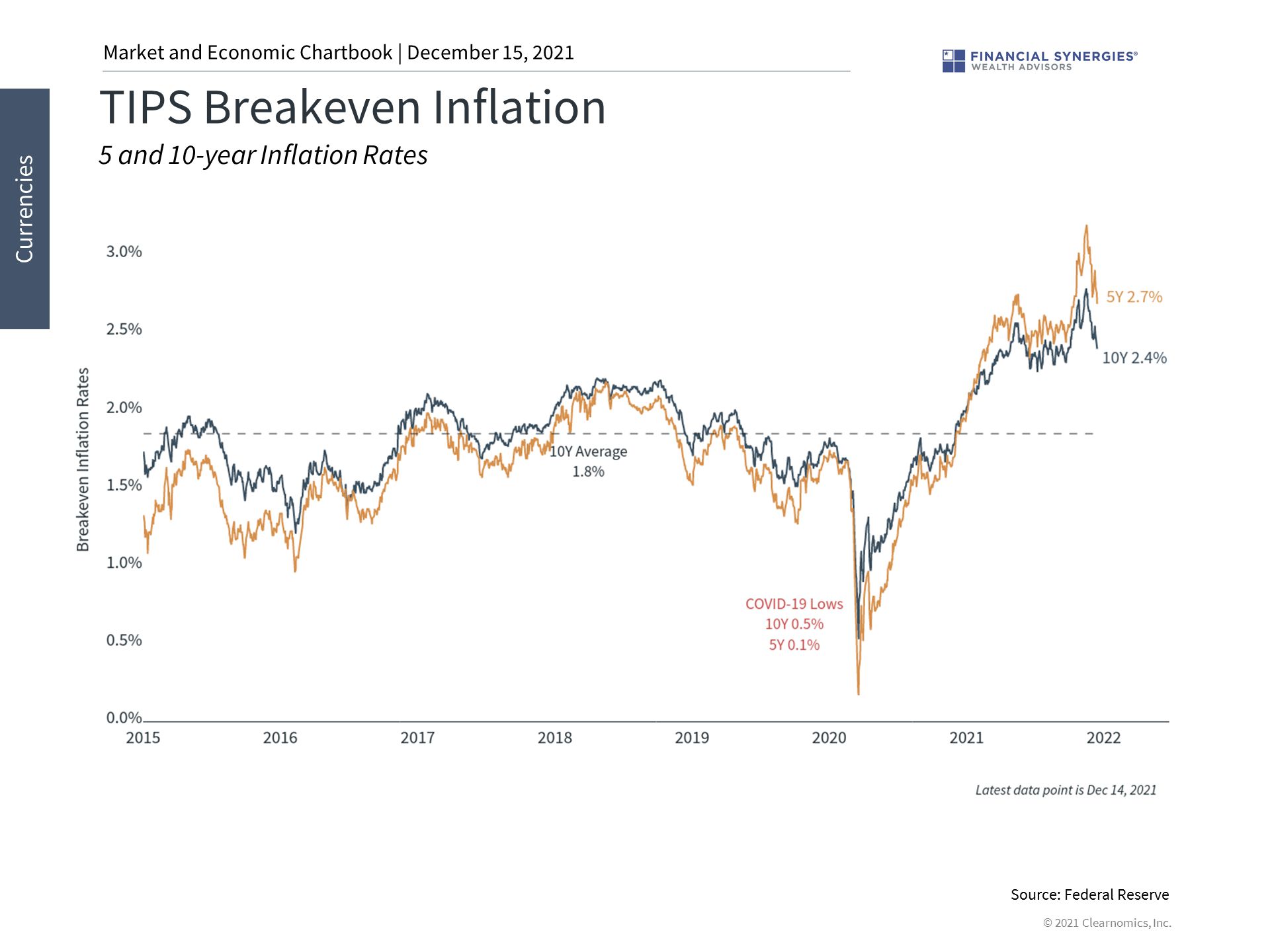 Various market measures of inflation, including those implied by TIPS, suggest that inflation could remain higher for longer. However, even these measures expect longer-term inflation to fall back to around 2 to 3% once short-term pricing pressures subside. These are due to the pandemic, supply chain problems, energy costs and more.

3. Consumers are feeling the pinch 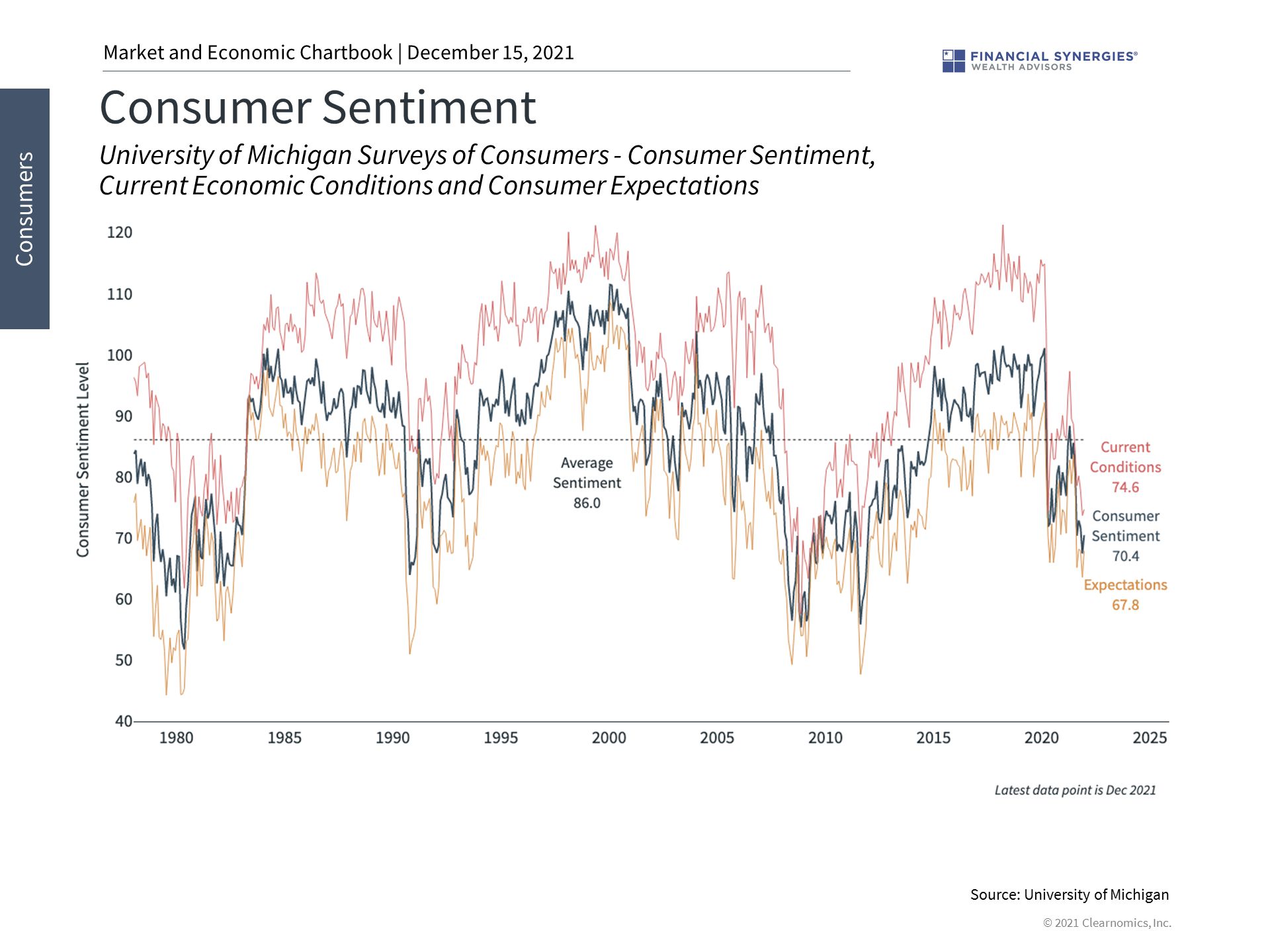 Consumer sentiment has plummeted in no small part due to rising inflation concerns. However, consumers are still spending and demand remains high. It may take time for consumers to adjust to higher inflation levels than they have experienced over the past couple decades.

Inflation is never fun for our wallets and checking accounts, but it can be managed. And at least this time inflation is running high alongside a robust and recovering economy.