Houston Is the Place to Be

It is probably no surprise that Houston’s economy is strong, but sometimes I take for granted how blessed I am to live in such a prosperous city. The U.S. economy is clawing its way back to normalcy and there are plenty of reasons for optimism, but there are still parts of the country where things look bleak, e.g. Detroit. And here I am in Houston, TX where the future has never looked brighter.

Houston has become an undisputed leader in domestic and international business, with economic ties reaching across the globe. The city benefits from a highly skilled workforce and has one of the largest concentrations of engineering talent generated from its energy, aerospace, and medical industries. People from around the globe are flocking to Houston to fill the growing needs of the region.

According to the U.S. Bureau of Economic Analysis, Houston’s economic activity accelerated last year. Adjusted for inflation, the city’s gross domestic product (GDP) grew by 5.7% in 2012. In 2011 GDP grew by 3.7%. In both years Houston’s growth rate was more than double the U.S. growth rate.

As illustrated below, Houston’s GDP growth for 2011 – 2012 was second fastest among the nation’s major metro cities; topped only by San Francisco. 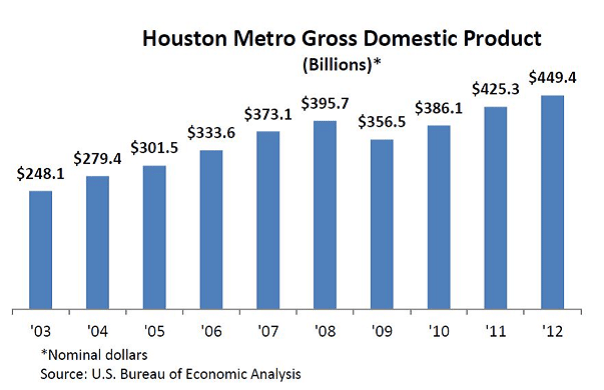 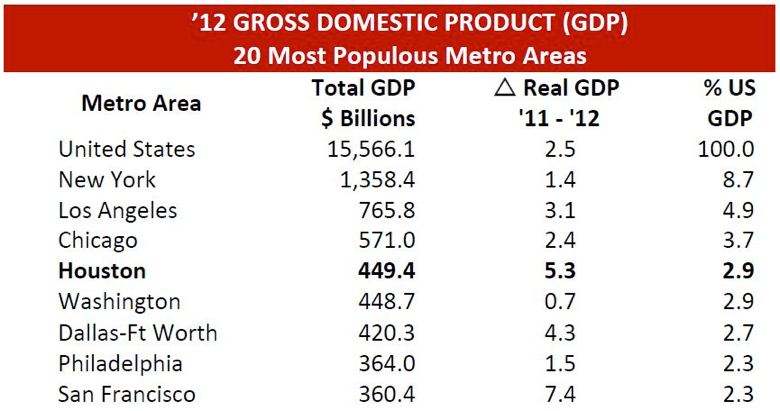 Obviously a major contributor to Houston’s economic success is the energy industry. Houston is the country’s energy headquarters and the international center for every segment of the oil and gas industry including exploration, production, transmission, marketing, and technology.

More than 3,700 energy-related companies are located in the Houston Metro area, including 40 of the nation’s 145 publicly traded oil and gas exploration and production firms. Houston simply dominates the energy industry, and there is not a more promising sector of the U.S. economy.

And beyond the strong economy and job market, the people of this great city are the icing on the cake. We meet with clients and business associates from all over the country and they all have one thing to say about Houston – everyone is just so nice!

I cannot think of anywhere else in the world I’d rather call home. I love this city.