A Wild Ride. The stock market dropped sharply this week, with the S&P 500, the Dow Jones, and the Nasdaq losing around 5.0% apiece in volatile trading. Sizable gains on Tuesday and Friday helped keep losses somewhat in check, but they couldn’t keep the major indices positive for the year. The three averages are down between 0.4% and 2.1% year to date.

This week’s selling was related to fears about rising interest rates, and the realization that stocks have gone too far, too fast. But it was a collective de-risking effort following the implosion of short volatility ETFs that acted as the catalyst for broad-based and indiscriminate selling activity. The S&P 500 soared 7.5% in the first four weeks of 2018 on top of last year’s 19.4% rally.

Technical, mechanical, and psychological forces all came together to knock back the market in an abrupt fashion. Ironically, recent economic data has been overwhelmingly positive. GDP growth, employment numbers, and wage growth have all been strong. There really has been no change in the economic outlook, and certainly no deterioration of the fundamentals.

The S&P 500 breached its 50-day simple moving average for the first time in five months. Weak-handed investors were consistently shaken out of “buy-the-dip” trades this week, sending stocks, and investor sentiment, even lower.

Congress missed a midnight spending deadline on Thursday – forcing a partial government shutdown – but passed a two-year budget deal a few hours later. The bill will boost spending by approximately $300 billion over the next two years, provide an additional $90 billion for disaster aid, and extend the debt ceiling until 2019.

The increase in spending prompted concerns about fiscal discipline, especially considering debt issuance was already expected to rise due to changes to the U.S. tax code. These concerns kept Treasuries in check and yields at multi-year highs.

Meanwhile, the CBOE Volatility Index (VIX), often referred to as the “investor fear gauge,” ended the week higher by 66.7%. The chart below says it all. After a long period of way-below-normal volatility, it came back like a tidal wave. 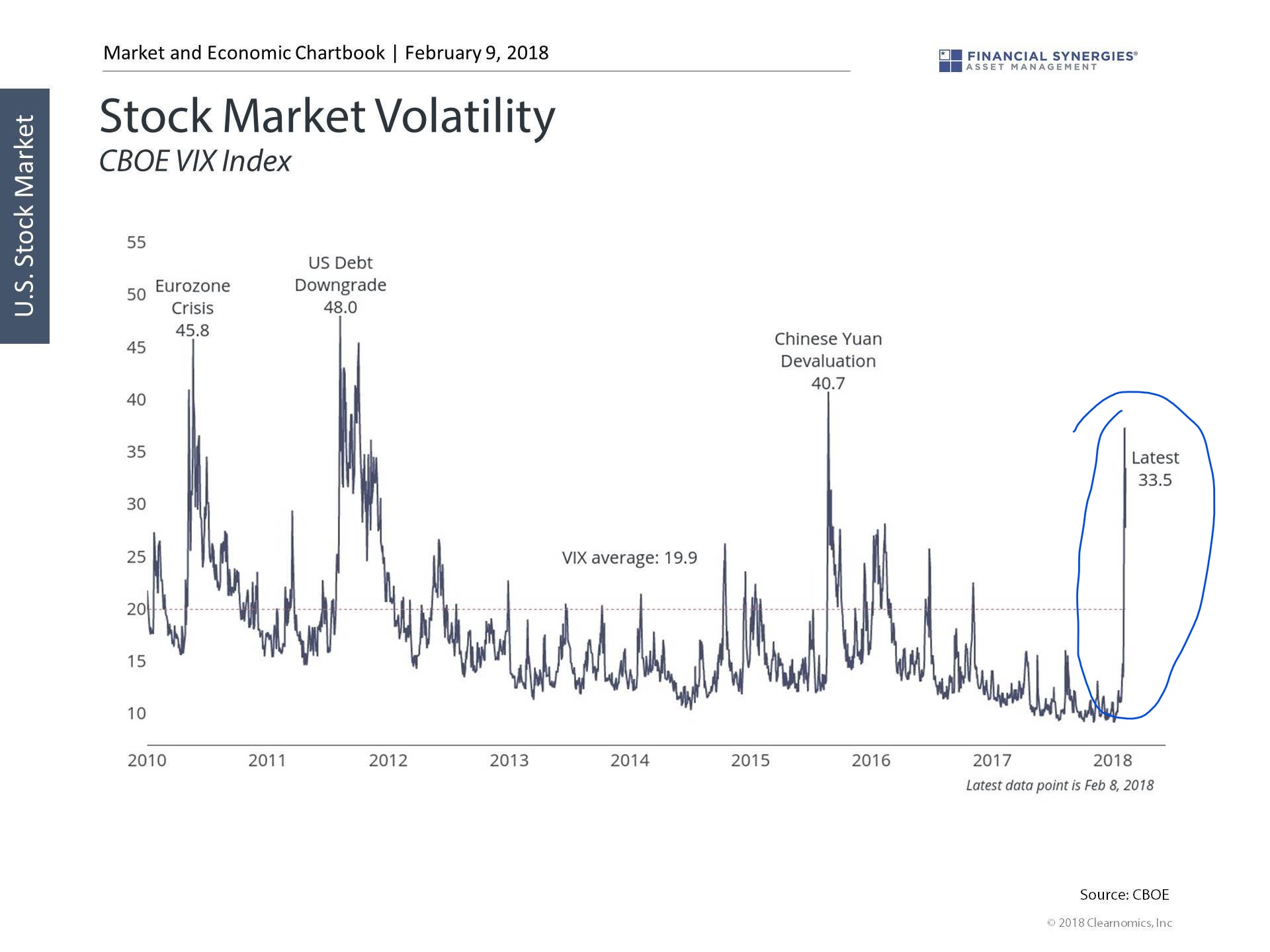 The market still anticipates that the next rate hike will occur at the March FOMC meeting as Fed officials minimized this week’s sell off, continuing to emphasize a path of gradual rate increases. The CME FedWatch Tool places the chances of a March rate hike at 71.9%, virtually unchanged from last week’s 76.1%.