Markets have shown greater signs of stability since the Fed’s rate hike announcement two weeks ago. Not only was it widely expected, but many investors believe the Fed should tighten even further.

This is because, despite risks surrounding the intensifying war in Ukraine, the economy is fundamentally strong. Unemployment has fallen to only 3.8%, 90% of the jobs lost during the pandemic have been recovered, and the average consumer is financially stable. At the same time, concerns over rising inflation have hurt consumer confidence, leading to the possibility of weaker spending.

Like many developed countries, consumer spending forms the backbone of the $24 trillion U.S. economy. When times are good and consumers are optimistic about their jobs and financial situations, they tend to spend more. This boosts sales for small businesses and large corporations alike, which in turn hire more workers, develop new products, make investments, and more.

This then creates new jobs and boosts wages which increase consumer activity further. So, how consumers feel is an important economic indicator for investors to consider across business cycles.

The good news is that the typical consumer has done well over the past two years. The bad news is that they are now facing challenges due to rising inflation. The University of Michigan Consumer Sentiment Index, for instance, shows that consumers are the most pessimistic since 2011, despite all of the positive trends. The same survey shows that consumers expect price inflation to average 5.4% over the next year and 3% over the next five years – in line with what many economists expect too.

Of the daily purchases affected by inflation, skyrocketing gasoline prices may sting the most. The average price per gallon of regular unleaded is now above $4, and as high as $6 in certain parts of the country and for higher grades. These prices are highly visible and their sudden jump can stir emotional and psychological responses. For many, driving is unavoidable whether it’s to commute to work, buy groceries or take the kids to soccer practice.

When considering the Consumer Price Index – the most commonly cited measure of inflation – gasoline makes up 3.7% of consumer spending for all urban consumers and 5% for wage earners specifically. Having such a large part of one’s daily expenses double or even triple so suddenly has a significant impact on one’s pocketbook. This is especially true for hourly workers, lower-income households, and those who are only now recovering from the economic downturn. To be seeing prices go up across other necessities adds insult to injury.

Despite these challenges, there are a few factors to keep in mind. First, although consumers are feeling pessimistic, they are arguably in their strongest financial positions in years. The job market is robust with many more job openings than unemployed individuals, wages are rising, house prices are climbing, and household net worth has reached new all-time highs. Along with high savings rates during the pandemic lockdowns, the average consumer is in a position to absorb these higher expenses.

Second, the initial shock of rising prices is the hardest to overcome. In the short run, there’s very little choice but to cut spending elsewhere. In the long run, consumers can adjust their behavior to offset these costs.

Oil prices, which spiked as high as $128 per barrel in early March, have also come back down. While energy prices are still elevated, this suggests there could be stability in gasoline prices as well, especially as more production comes online. Of course, much of this depends on how the ongoing conflict between Russia and Ukraine plays out.

Finally, perhaps the most important fact for investors to remember is that consumer sentiment is often a contrarian indicator for markets – i.e., it is often better to invest when consumers are nervous than when they are confident. Over the course of a business cycle, how consumers feel tends to rise and fall with economic conditions. In hindsight, the market is often the most attractive when consumers and investors are the most fearful.

While consumer sentiment is only a single indicator, it’s an important one. At the moment, the data suggest that everyday individuals and households will need prices to stabilize before they feel better about the world. This is another reason for long-term investors to focus on the future by staying diversified and focused. 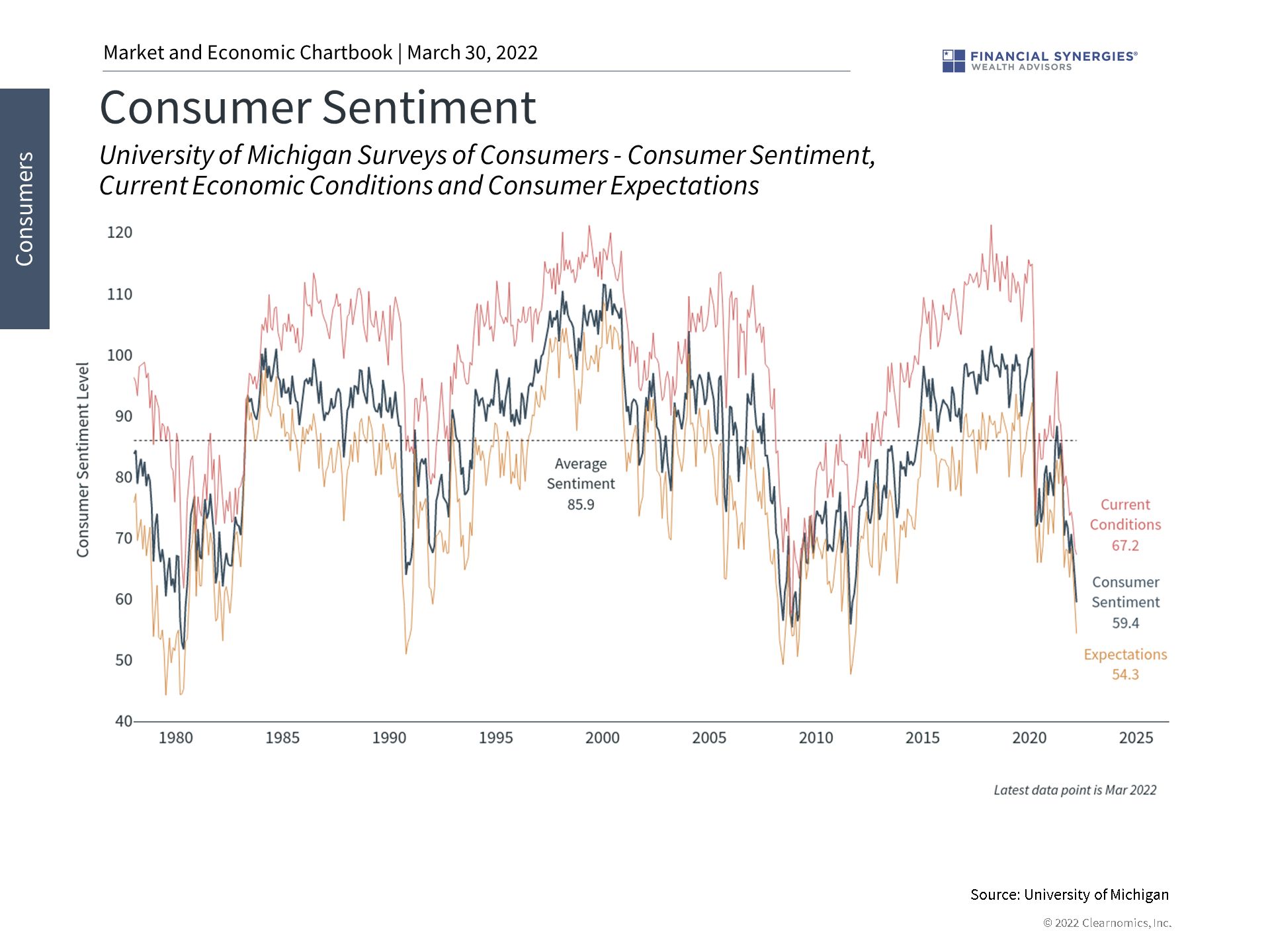 How consumers feel about the world has deteriorated due to rising prices. According to the University of Michigan Survey of Consumers, households expect prices to rise 5.4% over the next year and 3% over the next 5 years. This is especially challenging given the more recent jump in energy prices. 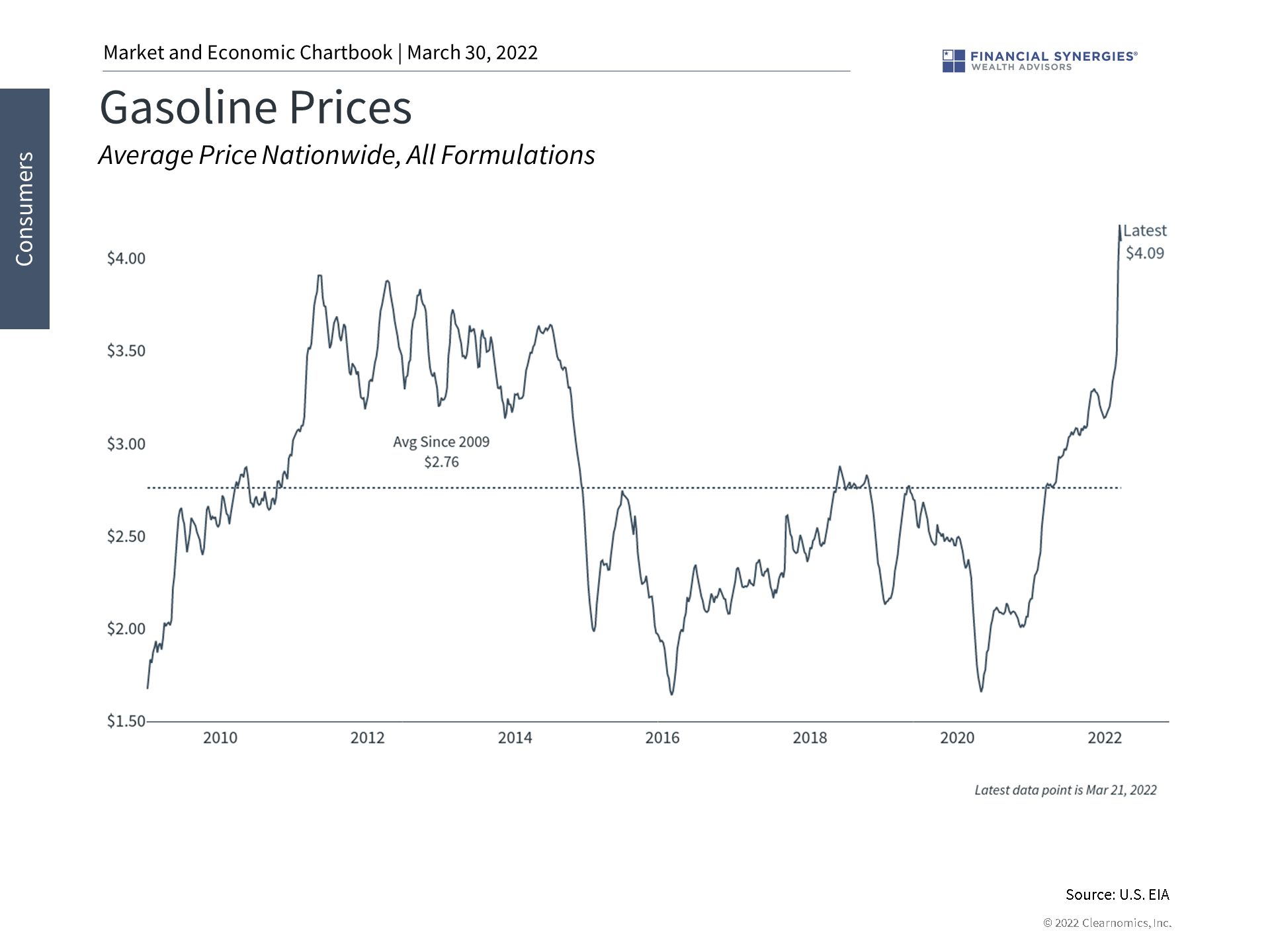 Gasoline prices have risen significantly since the pandemic lockdowns of 2020 and, more recently, since Russia invaded Ukraine. For many, gasoline is an unavoidable expense. These higher prices directly impact consumer pocketbooks and, in the short run, may reduce spending elsewhere.

3. However, consumers are still financially strong 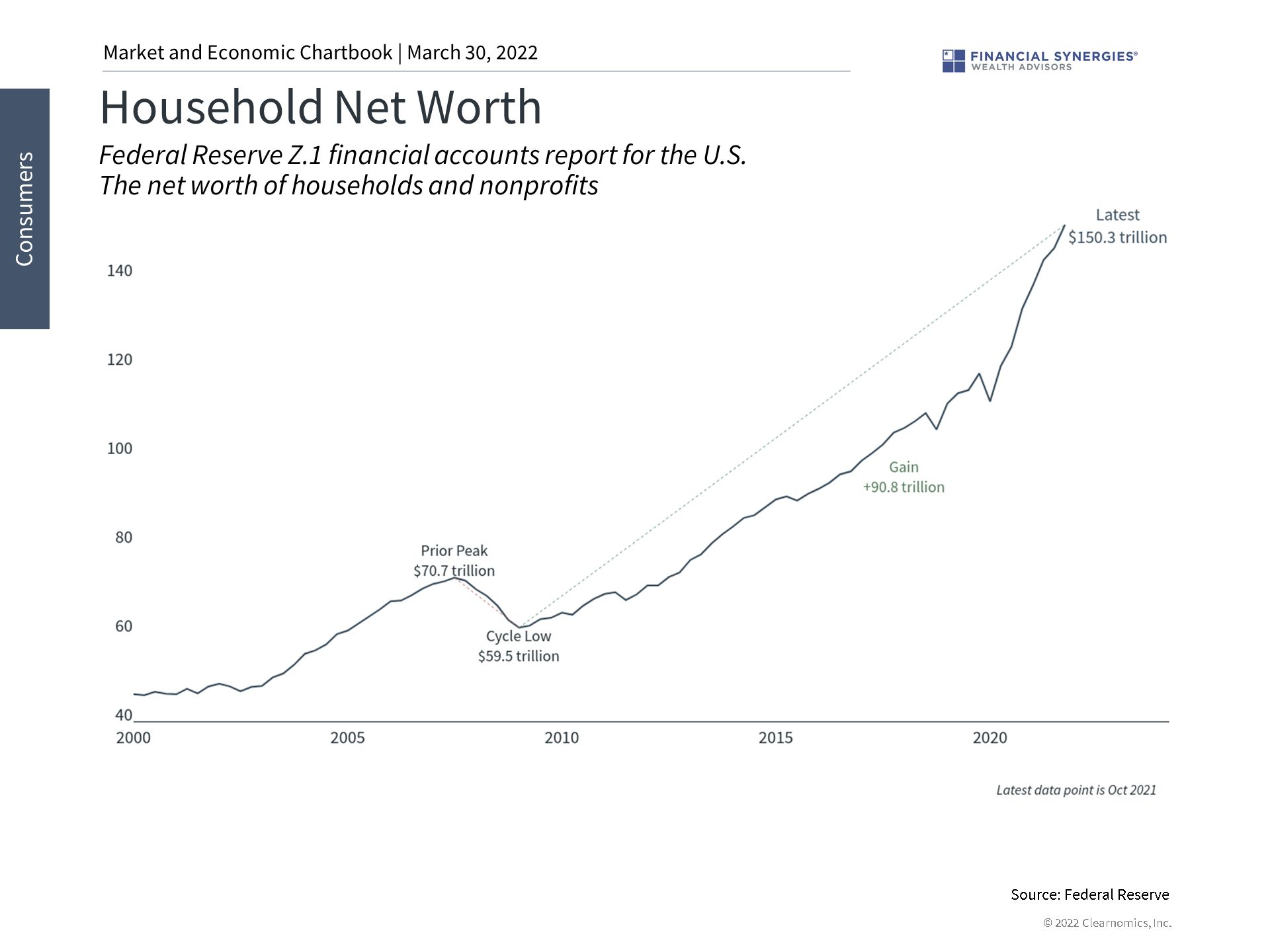 Despite rising prices, consumers have been in a strong position throughout the economic recovery. Household net worth has reached record levels driven by rising home prices, the stock market rebound, and more.

Historically, staying invested when consumers are the most pessimistic has been richly rewarded. Investors will do well by keeping their eyes on the long-term ball as markets and energy prices stabilize.