Like the seasons, boom and bust cycles are a natural and unavoidable part of both the stock market and the economy. And although the winter months may be unpleasant, they eventually give way to warmer weather. So too do recessions and bear markets eventually stabilize and pave the way for economic expansions and bull markets. Although the public health crisis makes the current bear market unique and uncertain, with stocks still down double digits for the year, it too will eventually turn around.

More importantly perhaps is the fact that bull and bear markets are not created equal. Unlike the movement of the Earth around the sun, bull and bear markets don’t operate on a set schedule. Instead, economists and investors are like Punxsutawney Phil checking their shadows. There are many investors who constantly fear the onset of winter and, when it finally arrives, equally many who believe it will never be spring.

The history of modern market and economic cycles suggests that while downturns may be sudden and deep, the subsequent expansions more than make up the difference. As the first chart below shows, bear markets since World War II have lasted anywhere from 6 months to two-and-a-half years. During these periods, the U.S. stock market has fallen anywhere from 22% (1957) to 57% (the 2008 financial crisis) at their worst points.

In contrast, bull markets have lasted from about 2 years to over a decade in length, with the two longest cycles occurring during the past 30 years. These cycles have seen the stock market multiply in value many times over. The nearly eleven-year bull market that ended in March experienced a price return of 401% and close to 530% with reinvested dividends. If seasons behaved like the bear and bull markets of recent decades, there would be beautiful weather 11 months out of the year.

Historical bear markets have almost always been tied to an economic recession. These recessions serve important purposes when there are significant imbalances in the economy, especially as they relate to over-exuberance in certain sectors or around individual and corporate debt. Thus, recessions are often periods when over-leverage is fixed and resources are re-allocated to better uses, setting the stage for future growth.

Of course, past performance is no guarantee of future results, and the point is not that bear markets are insignificant. For those who live in colder climates, preparation is the key – but not at the expense of enjoying the summer months. Preparation when it comes to one’s portfolio means holding a balanced set of asset classes and focusing on longer-term trends.

The trends relating to this bear market and the recession that is likely already occurring due to the coronavirus will depend on the ongoing economic shutdown. Tens of millions of jobs have already been lost and stress is building for individuals, businesses and municipalities, especially in credit markets.

Some of these job losses may be temporary depending on how quickly the economy reopens, but this is little consolation for those facing financial difficulties. The plateauing of COVID-19 cases in the U.S. and other countries returning to work are positive signs of potential green shoots over the next several months.

Thus, while there will undoubtedly be very poor economic data, increased stock market volatility, and challenging times ahead for people and companies alike, it’s important to see the bigger picture when it comes to investing. Below are three charts that help to put bull and bear markets in perspective.

1. Bull and bear markets are a natural part of investing 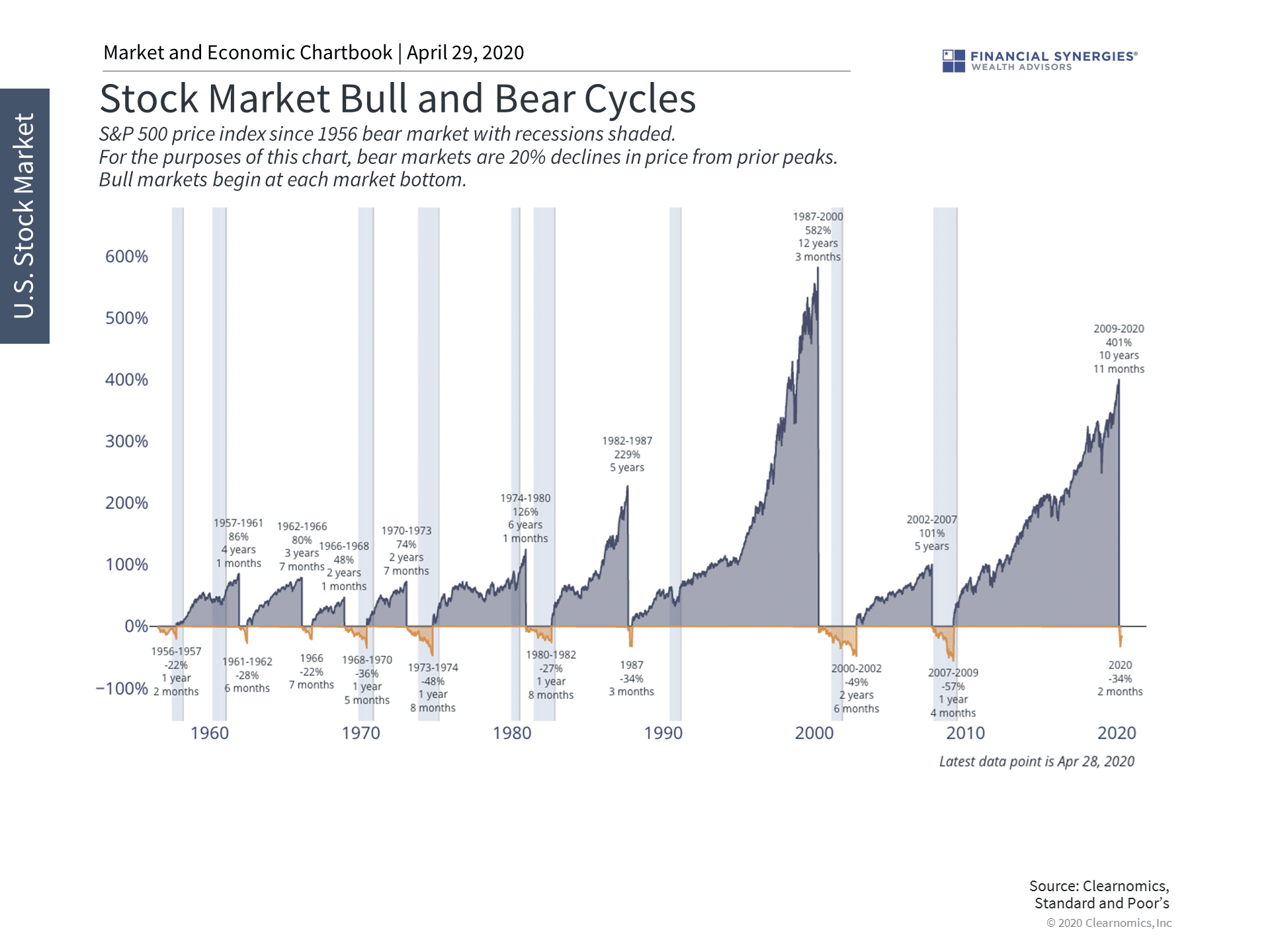 Bull and bear markets are a natural and unavoidable part of investing. Not only are they difficult to predict, but each market cycle has its own unique circumstances. Despite this, historical bull markets tend to last much longer and generate much larger returns compared to bear market declines.

2. Bear markets tend to turn around without notice and recover steadily 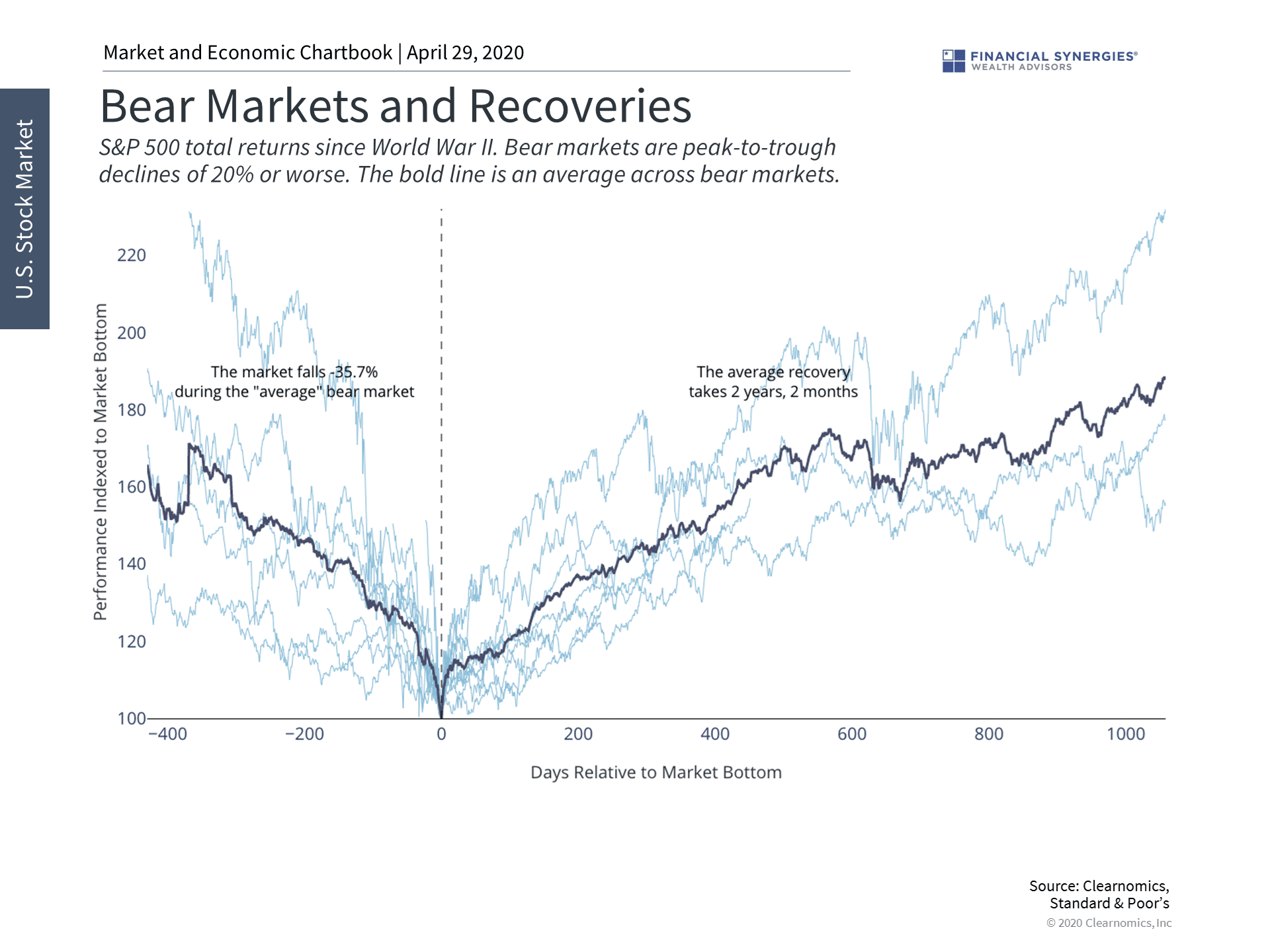 While bear market declines can be sudden and swift, recoveries tend to occur without notice. These subsequent bull markets then recover over years, with recent cycles lasting a decade or longer. 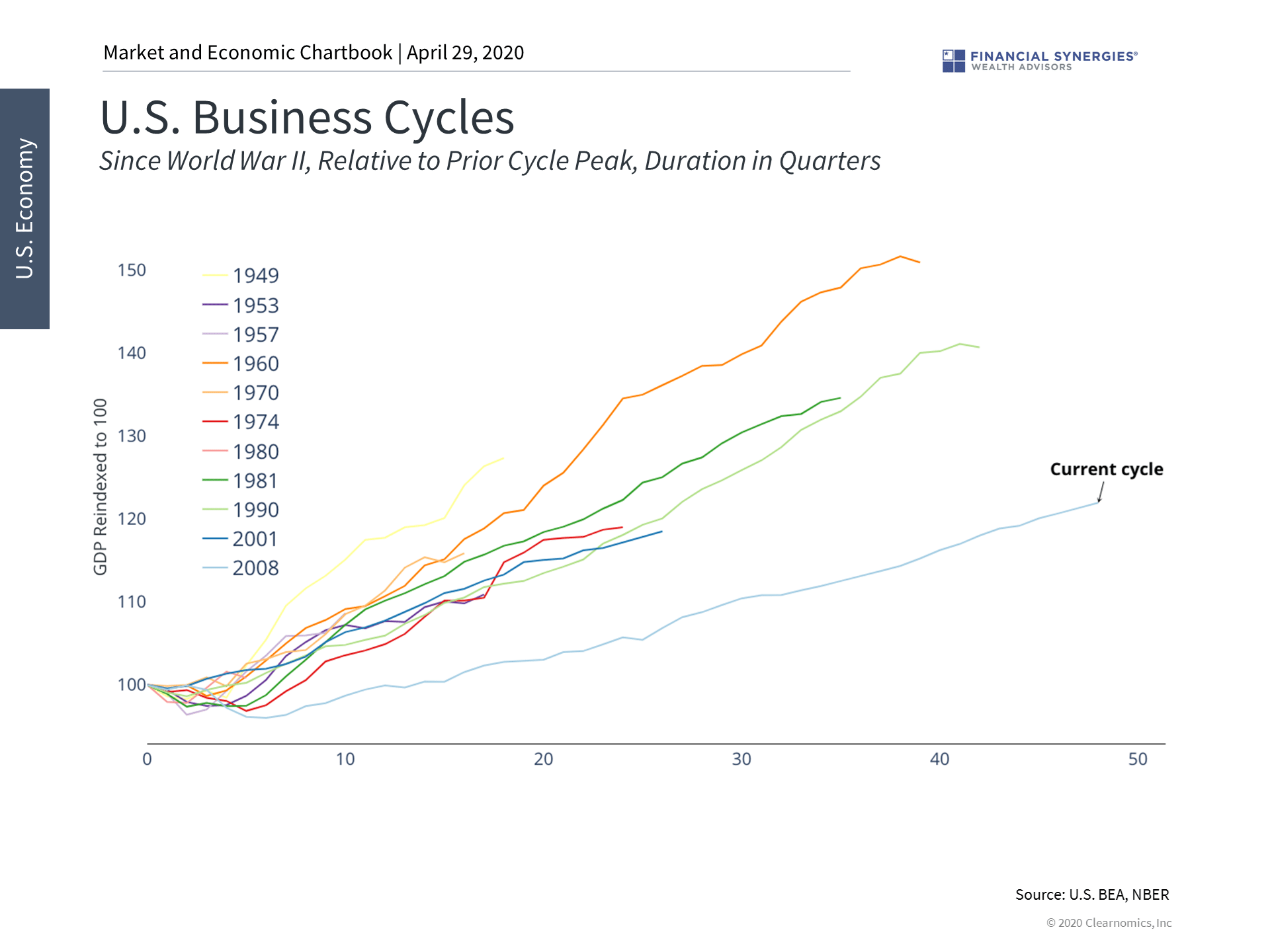 While the stock market and the economy are not the same, they are very much related. This is because stock prices often fluctuate depending on economic performance via earnings, interest rates, credit spreads, and other factors. It’s no surprise then that the economy shows similar patterns of abrupt recessions followed by long expansionary periods.

We should always keep bull and bear markets in context since these cycles occur over years and decades, not days, weeks or months. Holding portfolios that can weather these cycles is the key to long-term success.