A Decade in Review

Imagine it is early January 2010 and you are reading a review of the financial markets. Investors have been on a roller coaster over the past three years, living through the stress of the global financial crisis and market downturn of 2008 – 2009, then experiencing the recovery that began in March 2009 and is still going strong.

Investors who rode out the market’s slide are beginning to be rewarded. But the rebound is 10 months old, and markets have a long way to go to reach their previous highs. Opinions are mixed about what might unfold in the coming year. A December 2009 headline in the Wall Street Journal underscored the uncertainty: “Bull Market Shows Signs of Aging.” The publication pointed out that, although stocks have rallied and indices are on the rise, worries are mounting in some quarters that the market is running out of steam.

From the vantage point of early 2010, you may be wondering whether to stick with your investment plan or move into cash and wait for more evidence that the markets have recovered. Now, fast forward to today and consider what the global equity markets delivered to investors who stayed the course.

On a total return basis, global stocks more than doubled in value from 2010 – 2019, as Exhibit 1 shows. The MSCI All Country World IMI Index, which includes large and small-cap stocks in developed and emerging markets, had a 10-year annualized return of 8.91%. From a growth-of-wealth standpoint, $10,000 invested in the stocks in the index at the beginning of 2010 would have grown to $23,473 by year‑end 2019. 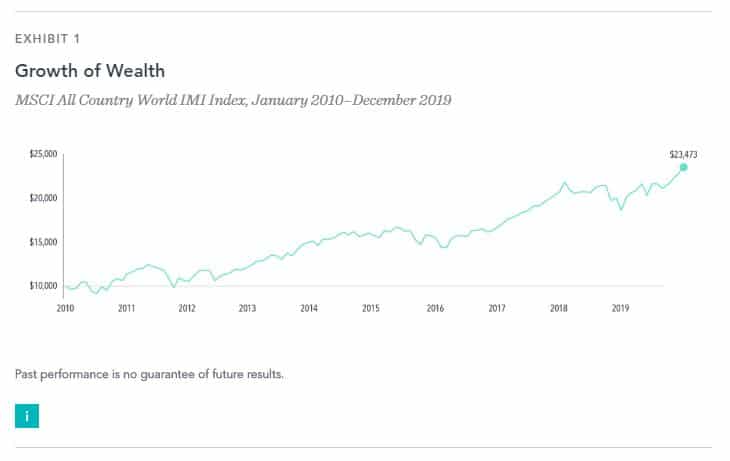 Despite positive annual market returns during most of the decade, investors had to process ever-present uncertainty arising from a host of events, including an unprecedented US credit rating downgrade, sovereign debt problems in Europe, negative interest rates, flattening yield curves, the Brexit vote, the 2016 US presidential election, recessions in Europe and Japan, slowing growth in China, trade wars, and geopolitical turmoil in the Middle East, to name a few.

The decade also brought technological advances in electronic commerce and cloud computing, the global embrace of the smartphone and social media, increased automation and enhanced artificial intelligence, and new products like electric cars and early iterations of self‑driving ones.

Looking back, you could conclude that the decade had its share of uncertainty – just like the decades before. But overall, the US equity market experienced moderate volatility compared with previous decades. Exhibit 2 displays this by looking at returns and standard deviation, where a higher standard deviation reflects wider market swings during that decade. 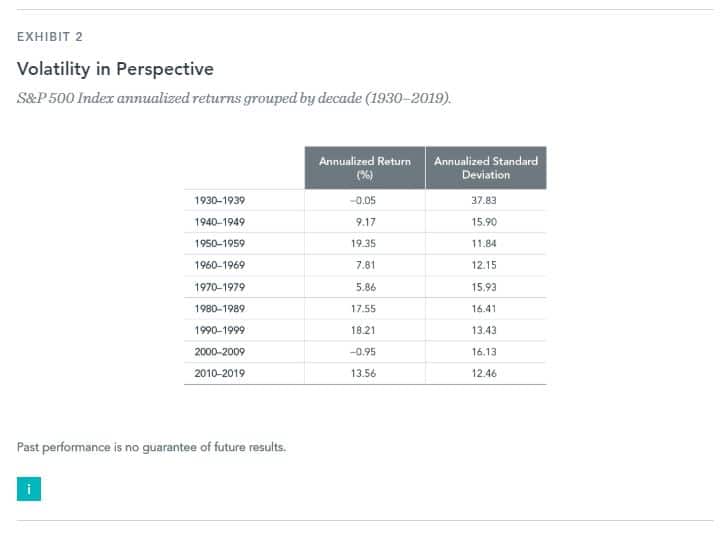 Investors who committed to global diversification and to areas of the market associated with higher returns – small cap stocks and value stocks (i.e., stocks trading at low relative prices) – were certainly challenged over the past decade. As shown in Exhibit 3, during the 2000s, investors were generally rewarded for holding emerging markets stocks and developed ex US stocks. During the 2010s, the US market outperformed developed ex US and emerging markets. 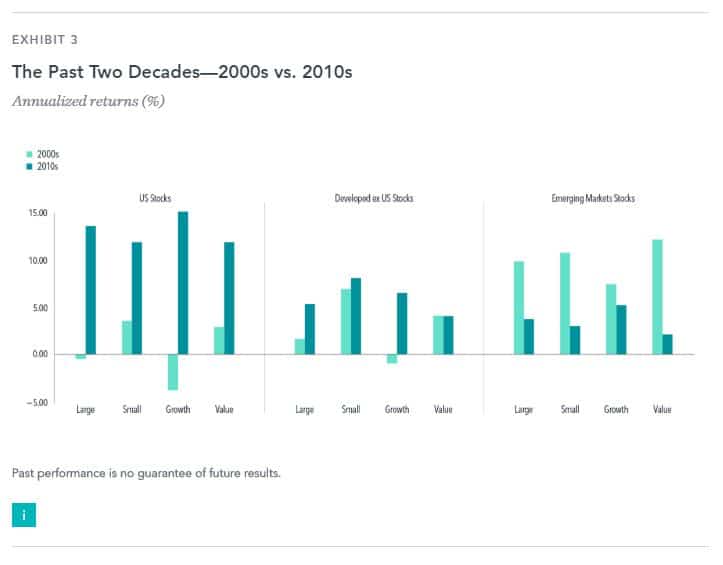 The performance of value stocks vs. growth stocks (i.e., stocks trading at high relative prices), and small vs. large-cap stocks, also varied between decades. Small-cap and value stocks outperformed large-cap and growth stocks in the 2000s, while the 2010s produced mixed outcomes. Small-caps underperformed large-caps in the US and emerging markets but outperformed in the developed ex US market. Value underperformed growth in all three market regions. Despite underperforming large-cap and growth in the US, small-cap and value delivered 11.83% and 11.71%, respectively, for the decade.

Exhibit 4 shows the cumulative investment experience over both decades, with small-cap and value stocks outperforming large-cap and growth stocks, respectively, across the US, developed ex US, and emerging markets. The annualized 20-year returns illustrate how diversification can help investors ride out the extremes to pursue a positive longer-term outcome. 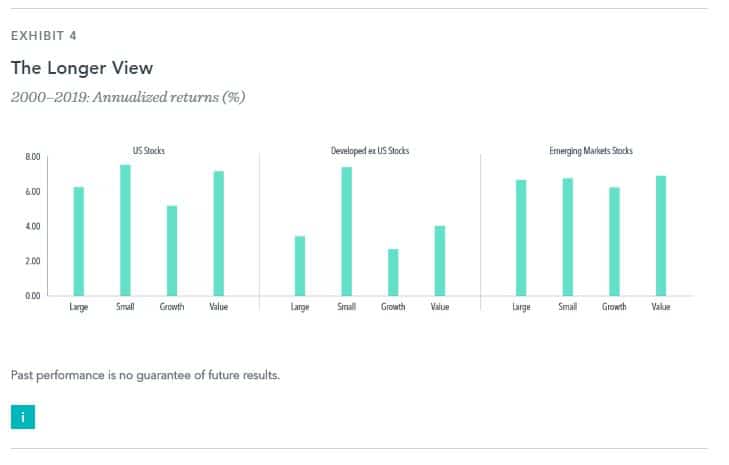 Over the past decade, global fixed income also posted returns that may have surprised some investors. In 2010, investors looking at historically low interest rates may have expected rising rates as financial markets and economies recovered from the crisis. But over the decade, short-term rates increased while long-term rates decreased. Realized term premiums were positive, as long-term bonds generally outperformed shorter-term bonds. Realized credit premiums were also positive, as lower-quality bonds generally outperformed higher‑quality bonds.

That brings us to now – January 2020. Stocks and bonds in the US, and in many other developed markets and emerging markets, logged strong returns last year. The US bull market is 10 years old, and current headlines can give investors other reasons to worry about the future – for example, a pushback on globalization, the limits of monetary policy, the fate of Brexit, and the vagaries of the 2020 US presidential race. And those are merely the known unknowns. Looking ahead, who can say what the next 10 years will bring? The only certainty is the decade will have its own set of surprises.

Here’s what we can learn from the past decade (and the ones that came before it): Despite all the change and uncertainty, the fundamentals of successful investing endured. Diversify across markets and asset groups to manage risks and pursue higher expected returns. Stay disciplined and maintain a long-term perspective. Take the daily news with a grain of salt and avoid reactive investment decisions based on fear or anxiety. Don’t try to predict future performance or time the markets. Instead, develop a sensible investment plan based on a strong philosophy – and stick with it no matter what.

Investors who follow these principles can have a better financial journey in any decade. 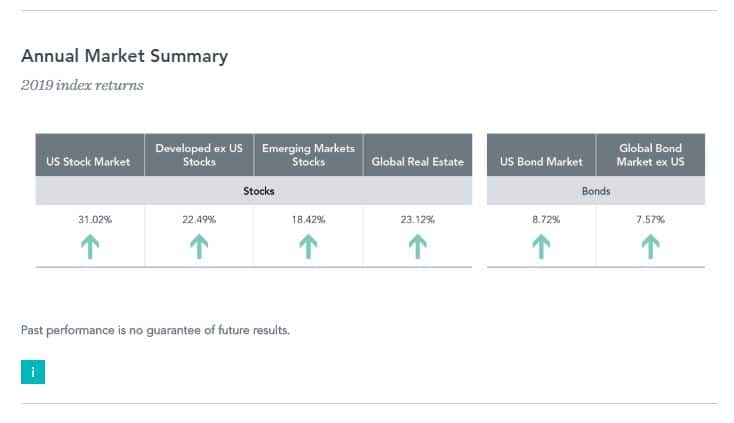 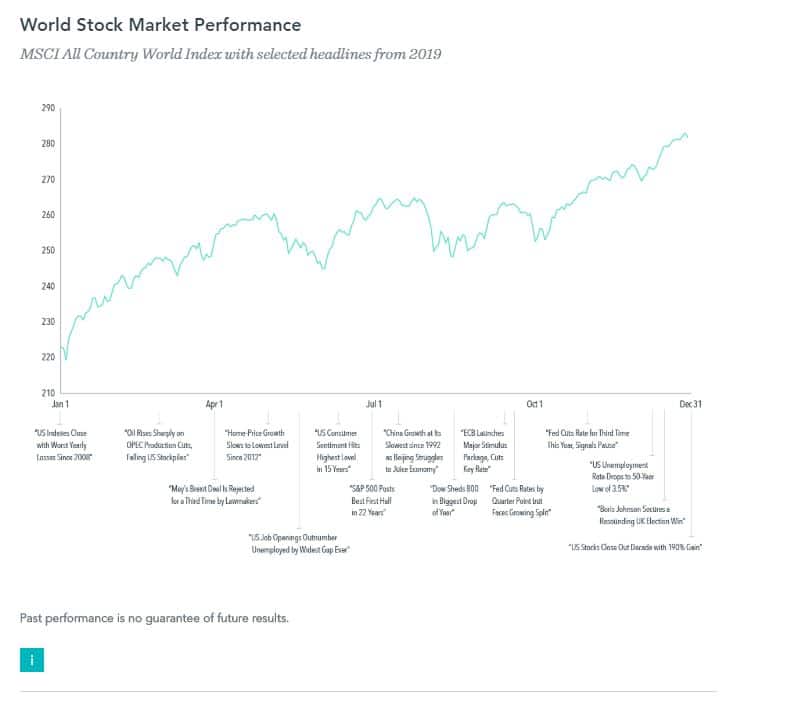 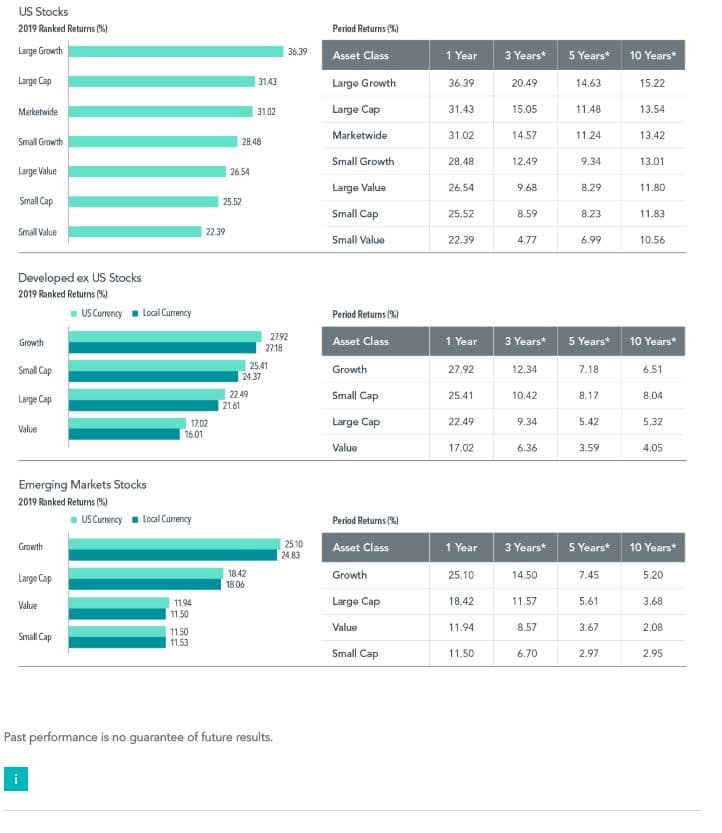 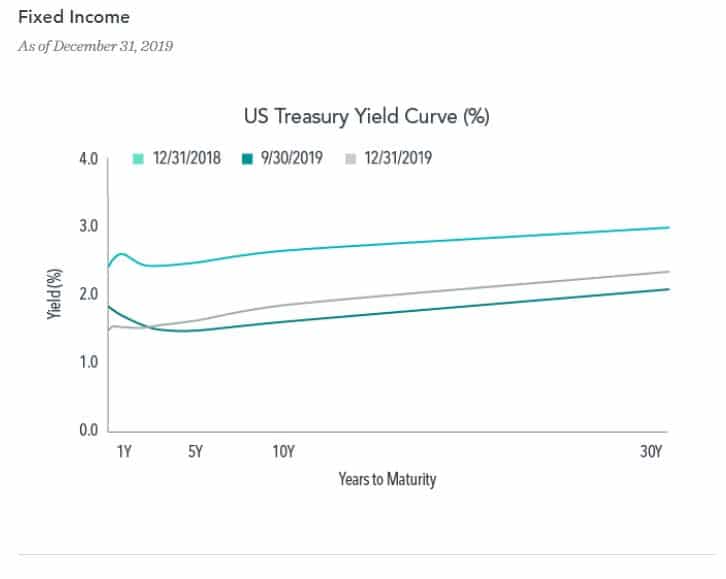 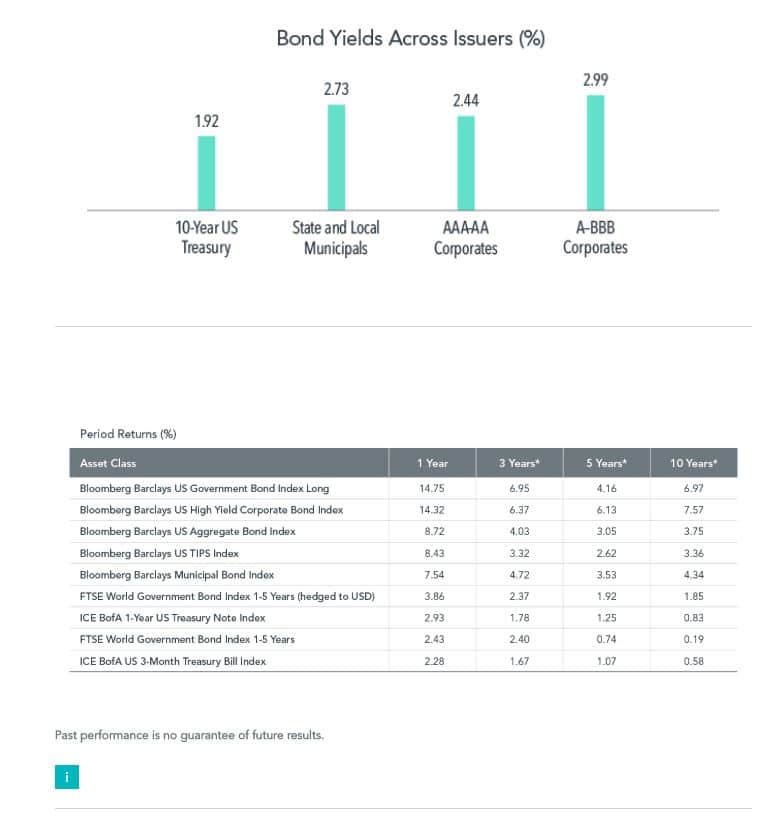