2021 has been a historic year for the economy and stock market. Economic activity is recovering at a once-in-a-lifetime pace as businesses expand and consumers spend.Financial markets are grinding higher with many major indices generating double-digit returns year-to-date, despite shifts in sector leadership. Inflation, which has been subdued for decades, is heating up. The pandemic rages on in parts of the world but signs of recovery are spreading too. What can long-term investors learn from the past several months as they prepare for the second half of the year?

If the best guidance for long-term investors last year was to focus on the light at the end of the tunnel, today the economy has already cleared the tunnel. In fact, it’s likely that, in the second quarter, U.S. GDP broke through previous peaks reached in 2019. Many economic indicators, from manufacturing PMIs to retail spending, are at levels not seen in a generation.

This is even more true of the stock market which has been anticipating a full recovery since last year. S&P 500 earnings-per-share have returned to pre-pandemic peaks and are expected to grow at a breakneck pace over the next year. While valuations have been stretched to almost dot-com era levels, growing earnings could continue to keep the bull market healthy. Rising interest rates and commodity prices, while tricky for bonds and inflation, have helped a variety of sectors including financials, energy, and materials. This adds to gains (and volatility) in areas such as technology and communication services.

While the comparison to pre-pandemic levels is natural, the market is already looking further down the road. Consensus expectations are that the economy will hit a new gear as the cycle continues. The pent-up demand in spending on both goods and services could be met by a further ramp up in new hiring activity by businesses large and small. Today, there are as many job openings in the U.S. as there are unemployed individuals.

One of the biggest investor concerns could continue to be inflation as new data periodically emerges. By some measures such as the core consumer price index, inflation is already the highest in three decades. And while price increases for consumers this year have been driven by the recovery and supply/demand disruptions, the Fed continues to keep monetary policy loose. What’s more, the government continues to increase spending, adding to the over $5 trillion in pandemic relief with new economic and infrastructure bills.

Naturally, it’s these concerns and others that will occupy investors’ minds during the next phase of the business cycle. While the recession and recovery have been unusual by historical standards, diversified portfolios can do well, even with the uncertainty of inflation and rising interest rates. Below are five insights that can help keep these questions and concerns in perspective.

1. Has the economy fully recovered? 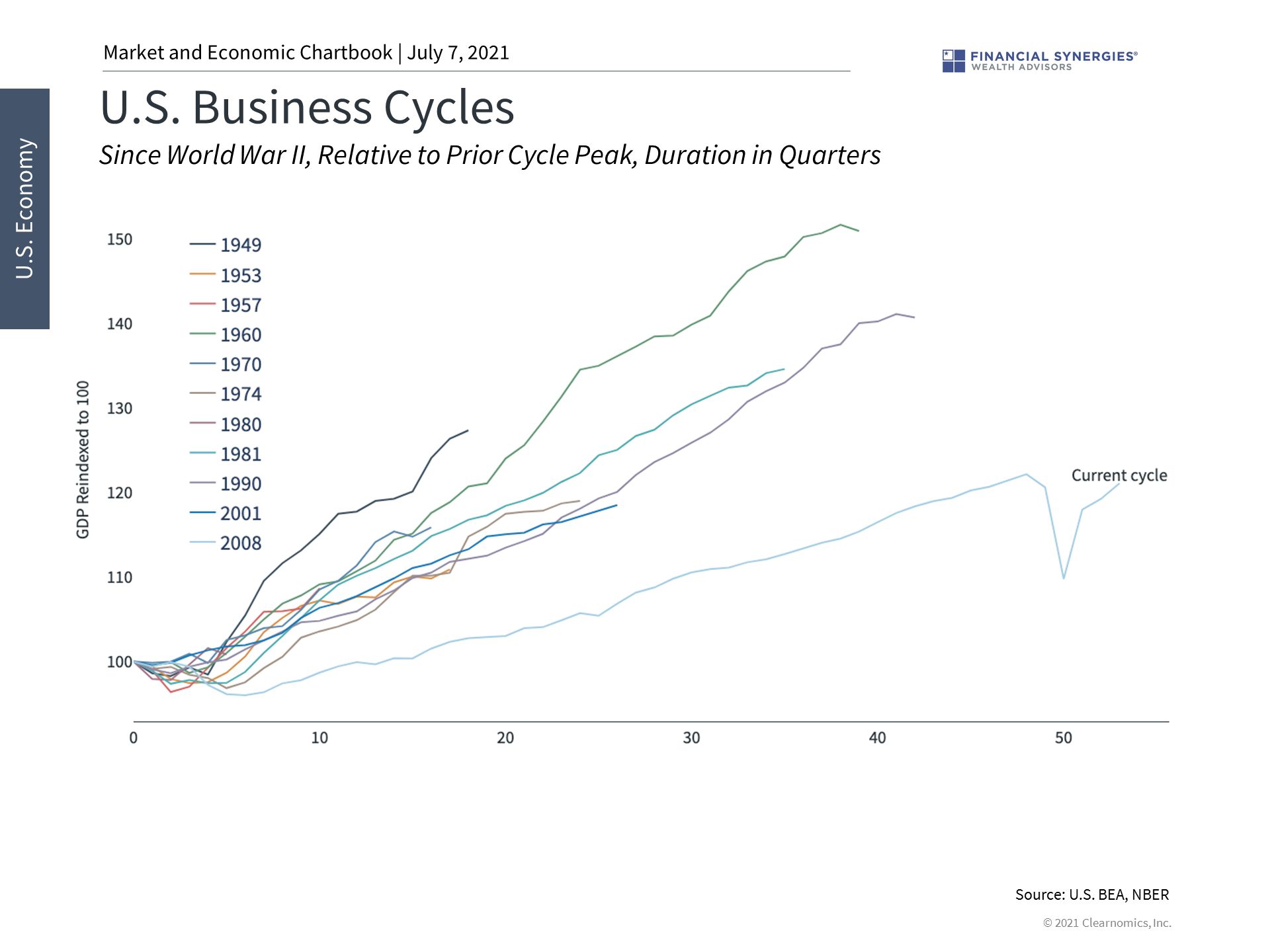 The U.S. economy, measured by GDP, had already recovered to within 1% of its pre-pandemic peak at the end of the first quarter. All signs point to an economy that achieved new highs in the second. From industrial production to retail sales, nearly all gauges of economic activity show signs of strong growth. Of course, this is expected during the early stages of a recovery and it’s reasonable to expect the pace to slow somewhat. 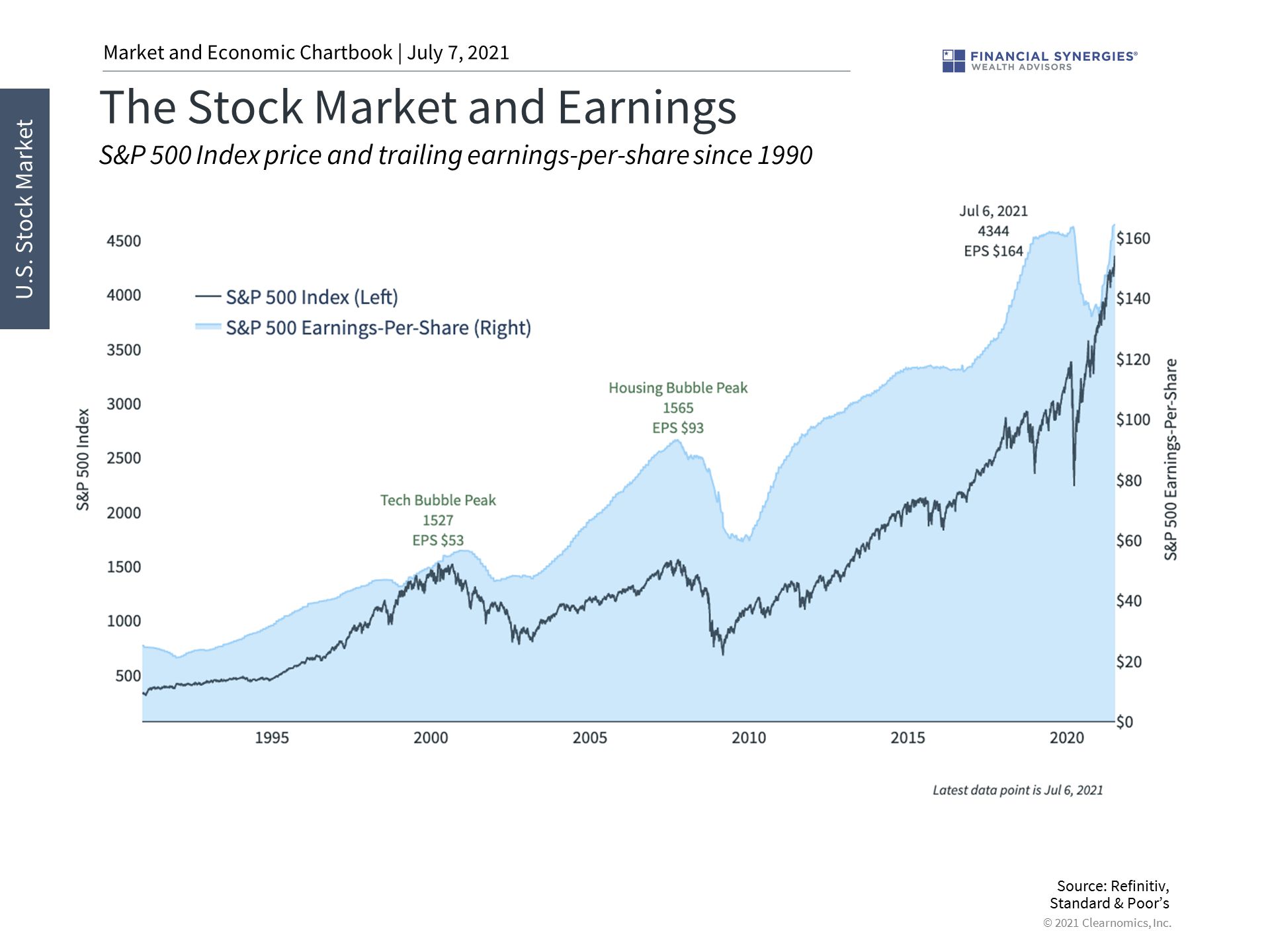 The economic recovery has directly translated into a recovery in corporate profits. S&P 500 earnings-per-share are also back to pre-pandemic levels which helps to make valuation levels more attractive. Like GDP, consensus estimates are for earnings to grow at a healthy pace over the next 12-24 months. 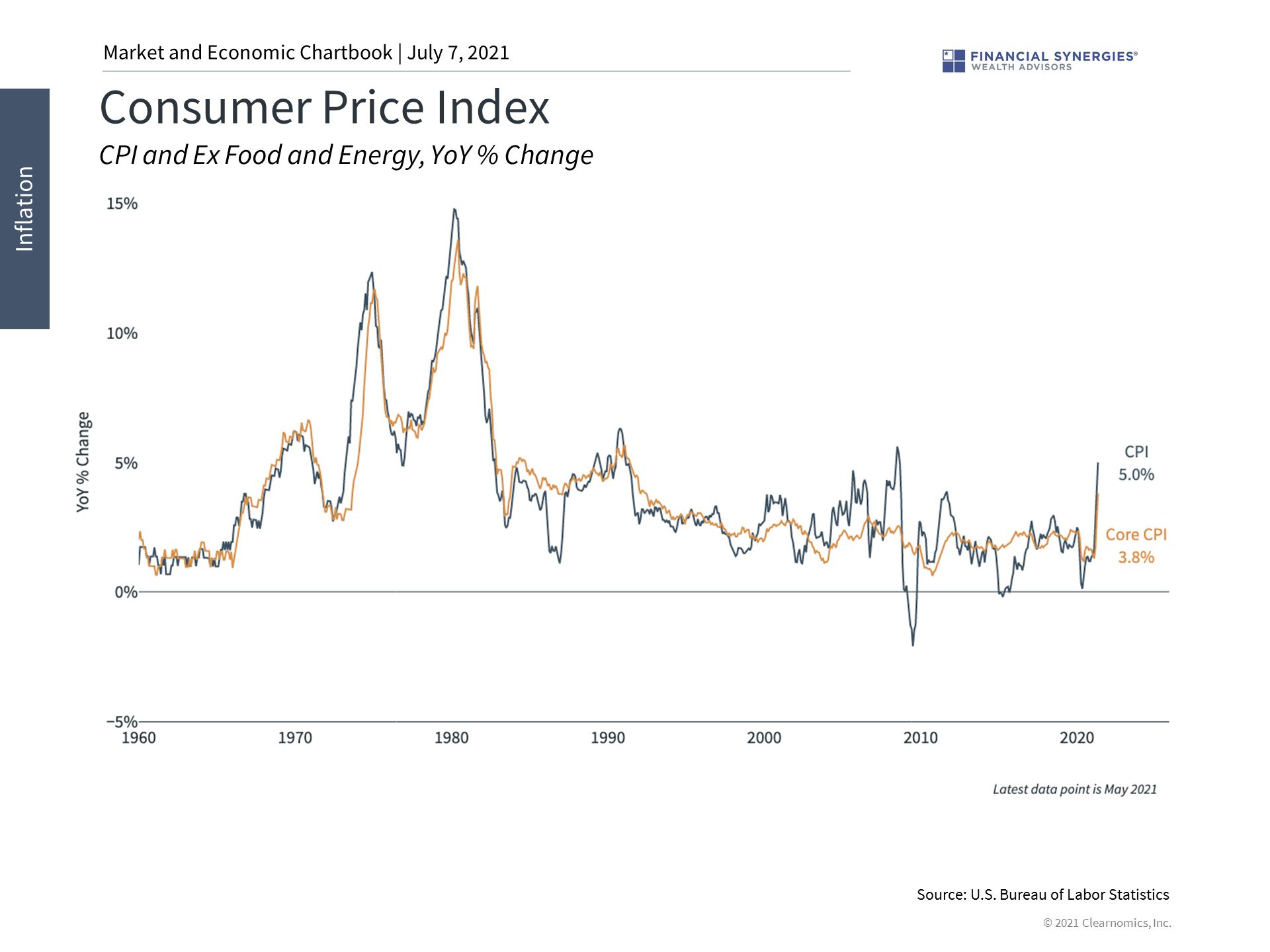 One red flag has been rising inflation which is often a sign of an overheating economy. The fact that price pressures have generally been subdued since the early 1980s has made it all the more important for investors to understand the risks to their portfolios.

However, it’s also important to understand what is driving inflation today. First, the recovery is naturally pushing prices higher compared to mid-2020. Second, supply and demand disruptions have occurred across industries but should eventually clear. Third, the Fed continues to keep monetary policy loose and the government is stimulating the economy. While the first two factors could resolve themselves over time, the last one is still a significant uncertainty.

4. How big is the government deficit? 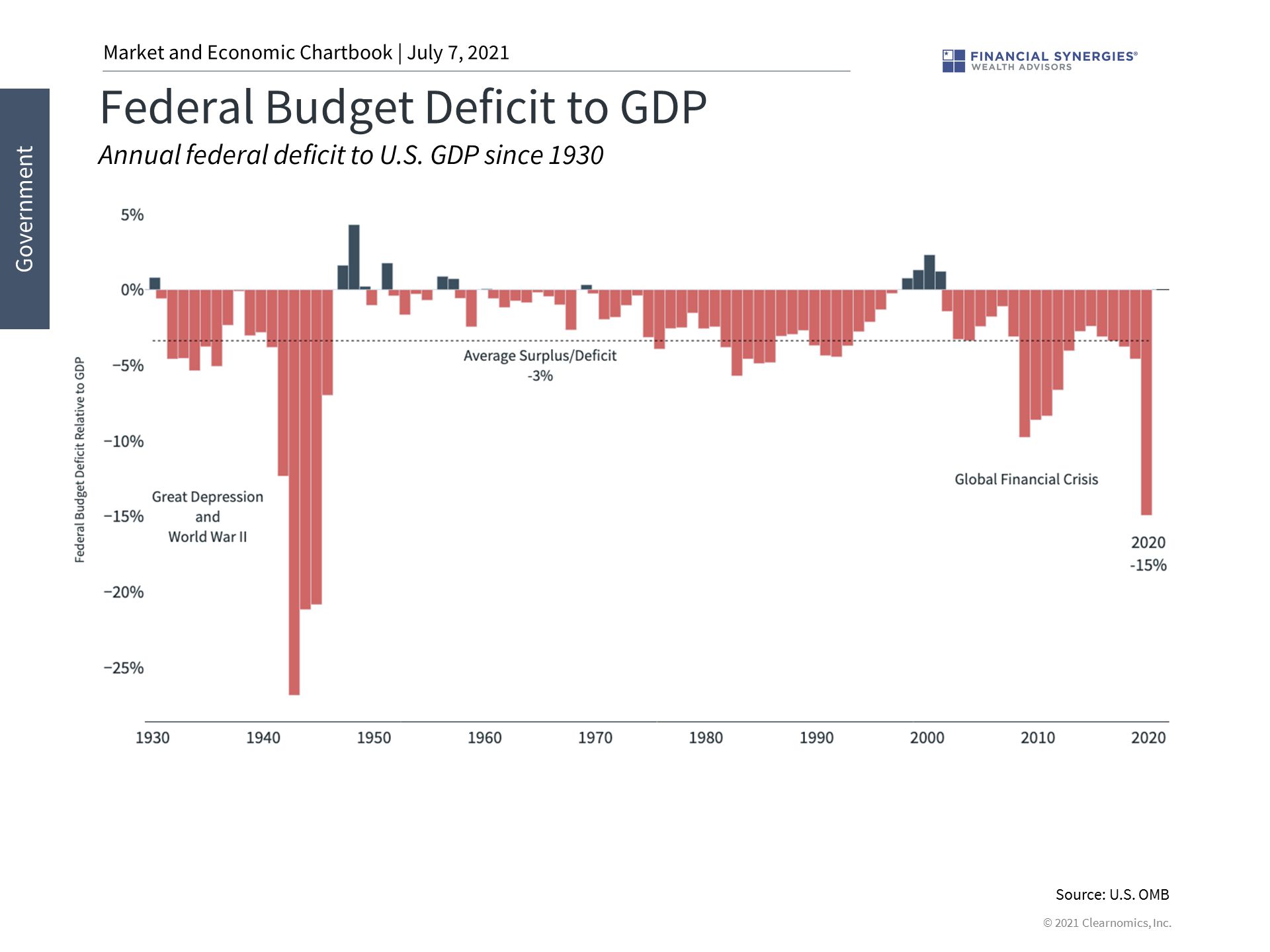 Government emergency spending over the past 18 months pushed the federal deficit to levels not seen since the Great Depression. However, this is typically what happens during economic crises and times of war. As the economy recovers and emergency stimulus is no longer needed, the deficit should improve as a percentage of GDP.

While many investors would prefer that the government run balanced budgets or generate surpluses for a rainy day, this seems unlikely. Instead, it’s important for investors to not overreact in their portfolios to short-term government spending.

5. Will the Fed end the party? 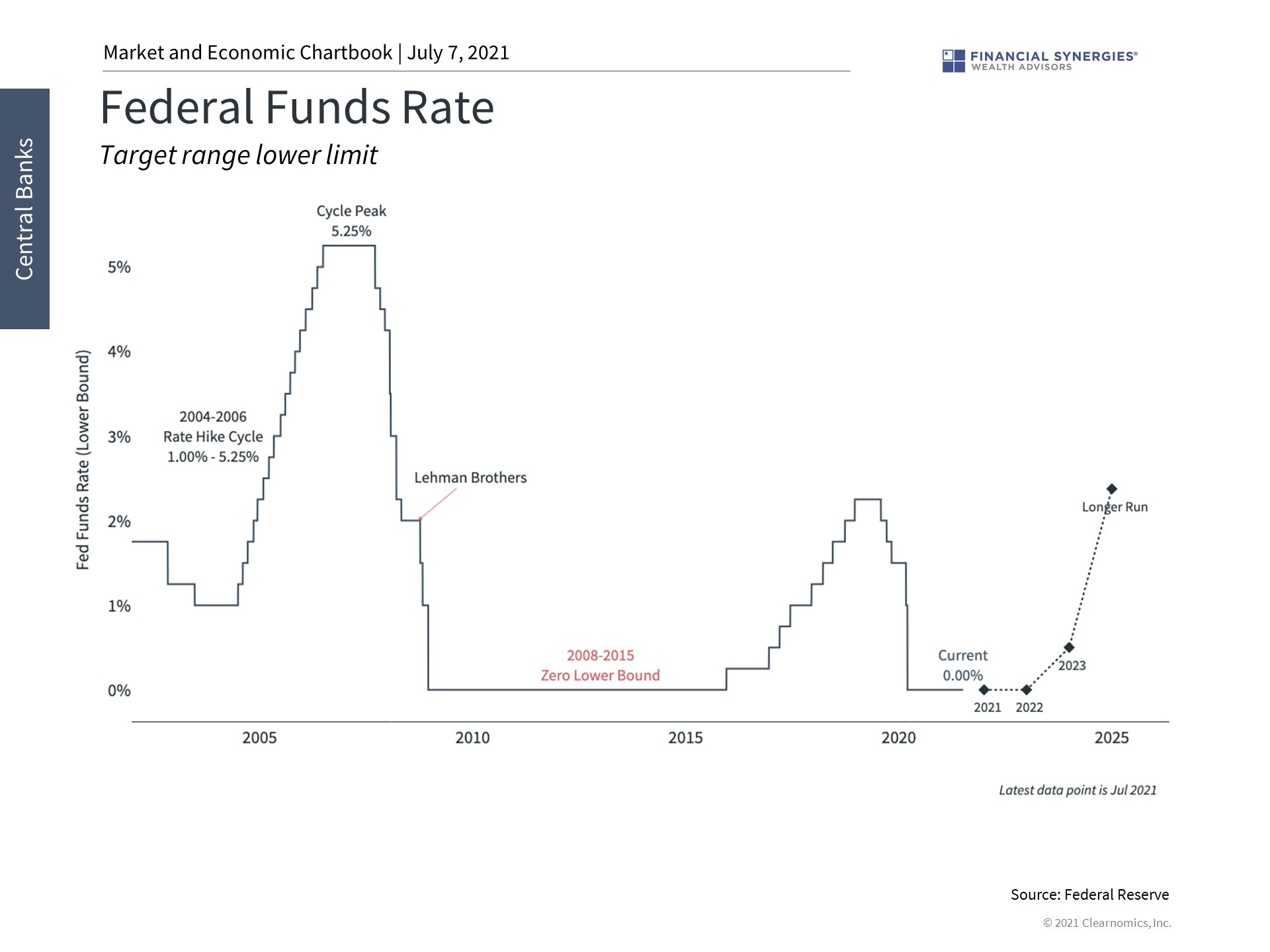 With the economy fully recovered and inflation rising, many are expecting the Fed to begin “tapering” its balance sheet expansion and then raise rates. The Fed’s latest projections show that they expect rates to begin rising in 2023 – at least a year and a half away.

Of course, this could begin sooner if the data heat up more. Even when the Fed does begin to slow its bond purchases, it will likely do so gradually. All told, the Fed will probably be cautious and keep monetary policy loose for quite some time.