2022 was the most challenging year for investors since the Financial Crisis of 2008. Markets fell into bear market territory and experienced their worst annual performance in 14 years.

As a result, the Fed hiked rates seven consecutive times from 0% last March to 4.25% in December. Along the way, a myriad of other events impacted markets from the war in Ukraine to China’s zero-Covid policy, affecting everything from oil prices to the U.S. dollar.

These market swings can cause whiplash for even the most experienced investors. Much of what drove markets last year was the result of the pandemic and its rapid recovery over the past three years. Like an earthquake that then causes a tsunami, the sudden drop and resurgence in business and consumer demand, fiscal and monetary stimulus, and global supply chain capacity created shock waves across the financial system. While they do cause immediate damage, even the largest shocks eventually settle.

Despite these historic shifts in the economy and markets over the past year, the principles of long-term investing haven’t changed. Staying disciplined, diversified and focused on longer time horizons is more important than ever.

For some, it may feel as if markets can’t catch a break, but this is how it felt in March of 2020 before the unprecedented recovery, in 2008 before a decade-long expansion, and during countless other times across history. Keeping one’s footing as markets rock back and forth is still the best way to achieve financial goals.

Below, we review five insights from the past year that can help investors to maintain a proper long-term perspective in 2023.

1. The historic surge in interest rates impacted both stocks and bonds 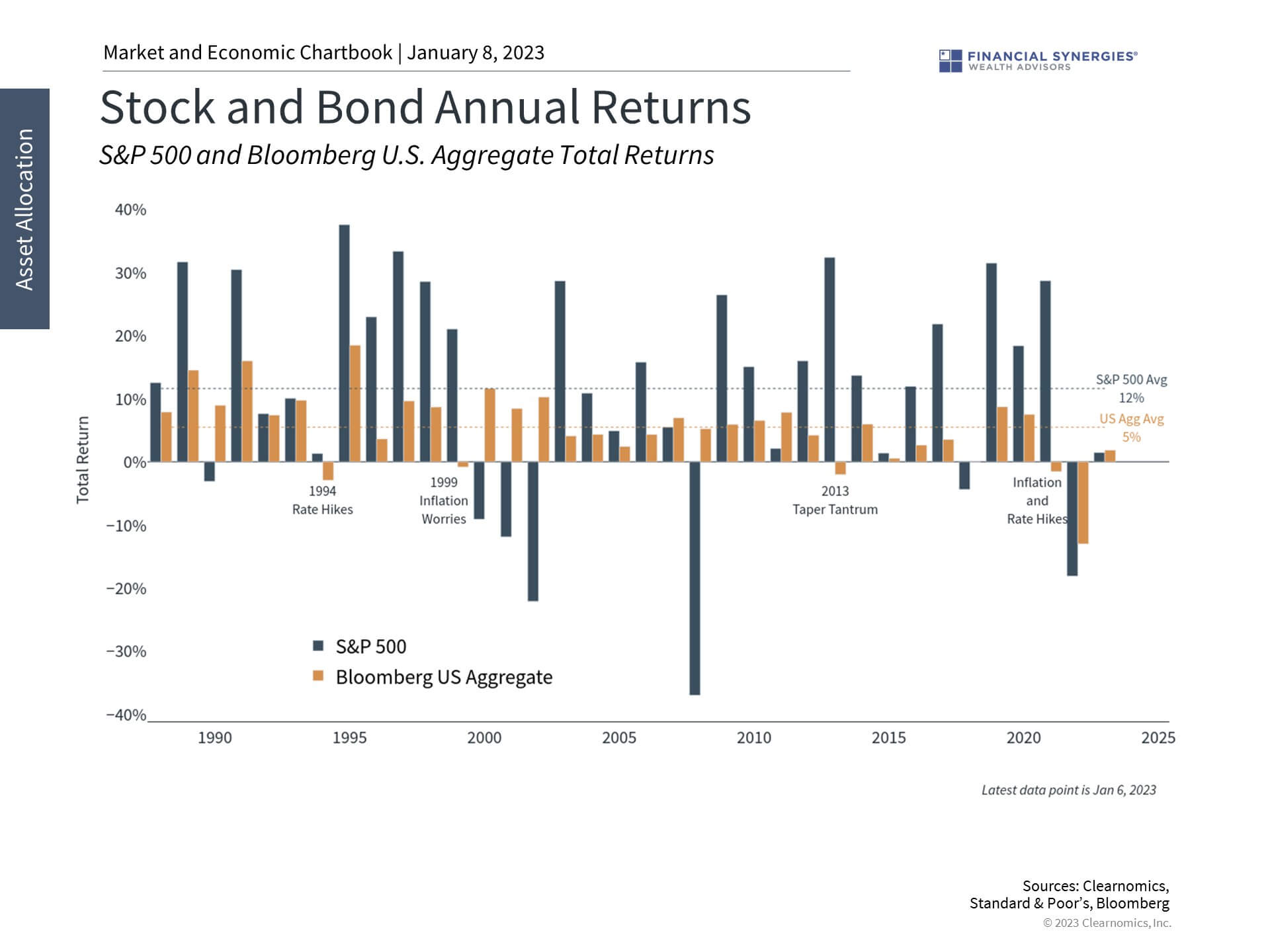 Beneath all of the headlines and day-to-day market noise, one key factor drove markets: the surge in interest rates broke their 40-year declining trend. Since the late 1980s, falling rates have helped to boost both stock and bond prices. Over the past year, the jump in inflation pushed nominal rates higher and forced the Fed to hike policy rates. This led to declines across asset classes at the same time.

While this has created challenges for diversification, there is also reason for optimism. Most inflation measures are showing signs of easing, even if they are still elevated. This has allowed interest rates to settle back down in recent months even as the Fed continues to hike rates. While still highly uncertain, most economists expect inflation and rates to stabilize over the next year rather than repeat the patterns of 2022.

2. The Fed raised rates at a historically fast pace 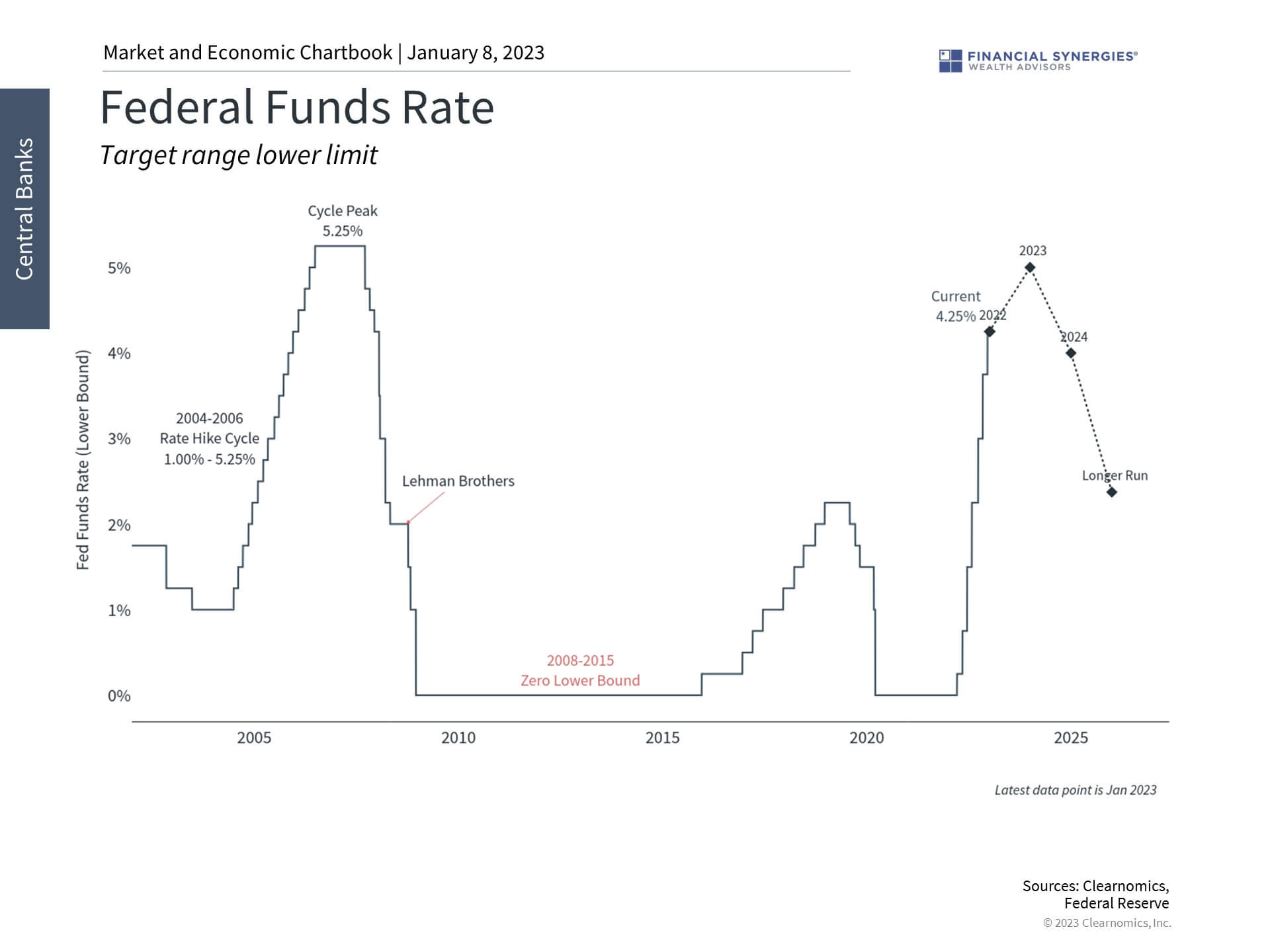 The Fed hiked rates across seven consecutive meetings in 2022 including four 75 basis point hikes in a row. At a range of 4.25% to 4.50%, the fed funds rate is now the highest since the housing bubble prior to 2008. In its communication, the Fed has remained committed to raising rates further and keeping them higher for longer in order to fight inflation.

Current market-based measures suggest that the Fed could push policy rates to 5% by mid-2023. The central bank continues to face a balancing act between inflation and a possible recession. Despite two negative quarters of GDP growth in the first half of 2022, few consider the economy to be in recession already. Instead, some forecasters expect the U.S. and many other countries to experience a recession in 2023, although most also expect it to be shallow. Slowing growth may mean that the Fed takes its foot off the brake pedal sooner.

This is where the market arguably had unrealistic expectations last year. The market rally from June to August and again in October and November occurred when investors believed the Fed might begin loosening policy. When these hopes were dashed, markets promptly reversed, causing several back-and-forth swings over the course of the year. These episodes show that good news that is supported by data can be priced in quickly but that investors should not get ahead of themselves. 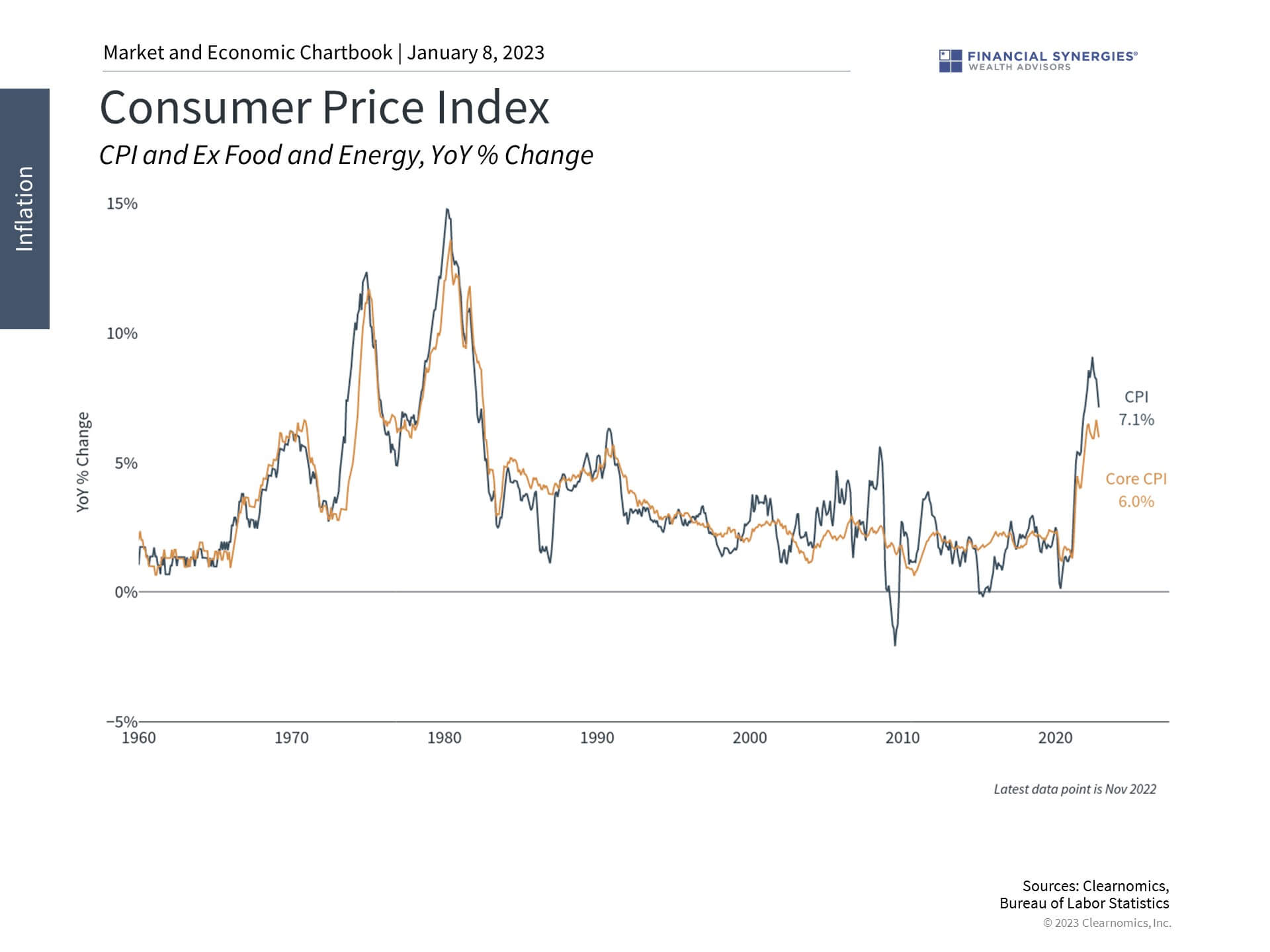 While inflation has not been “transitory,” it may still be “episodic.” This is because the factors that drove these financial shocks were, for the most part, one-time events. Many of these are already fading as supply chains have improved, energy prices have fallen, and rents have eased. Still, the labor market remains extremely tight and wage pressures could fuel prices that remain higher for longer.

At this point, the direction of inflation may matter to markets more than the level. Investors have been eager to see signs of improvement across both headline and core inflation measures, and good news has been priced in rapidly. There are reasons to expect better inflation numbers over the course of 2023.

4. The rallies in tech, growth and pandemic-era stocks have reversed 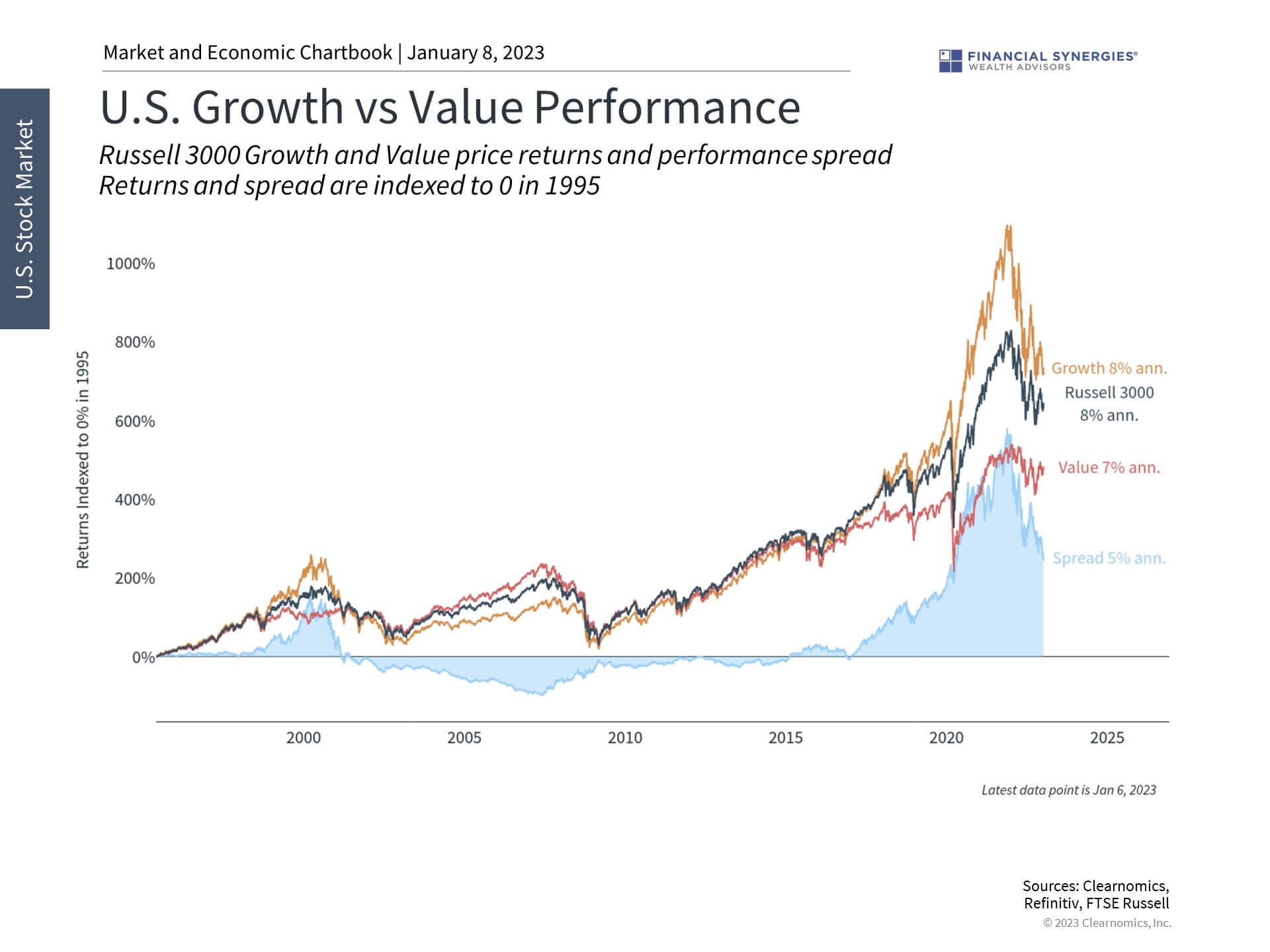 The past year also experienced a reversal of the rallies in 2020 and 2021 that were concentrated in the tech sector, growth style, and pandemic-era stocks. For the first time in years, Value outperformed Growth as former high-flying parts of the market crashed back to Earth as the economy slowed and interest rates jumped.

The key takeaway for investors is that diversifying across all parts of the market is important. This includes different size categories (large and small caps), styles (Value and Growth), geographies (U.S., developed markets and emerging markets), sectors, and more. It’s also a reminder that rallies can extend for long periods, during which investors experience FOMO and pile in with little thought to risk management. 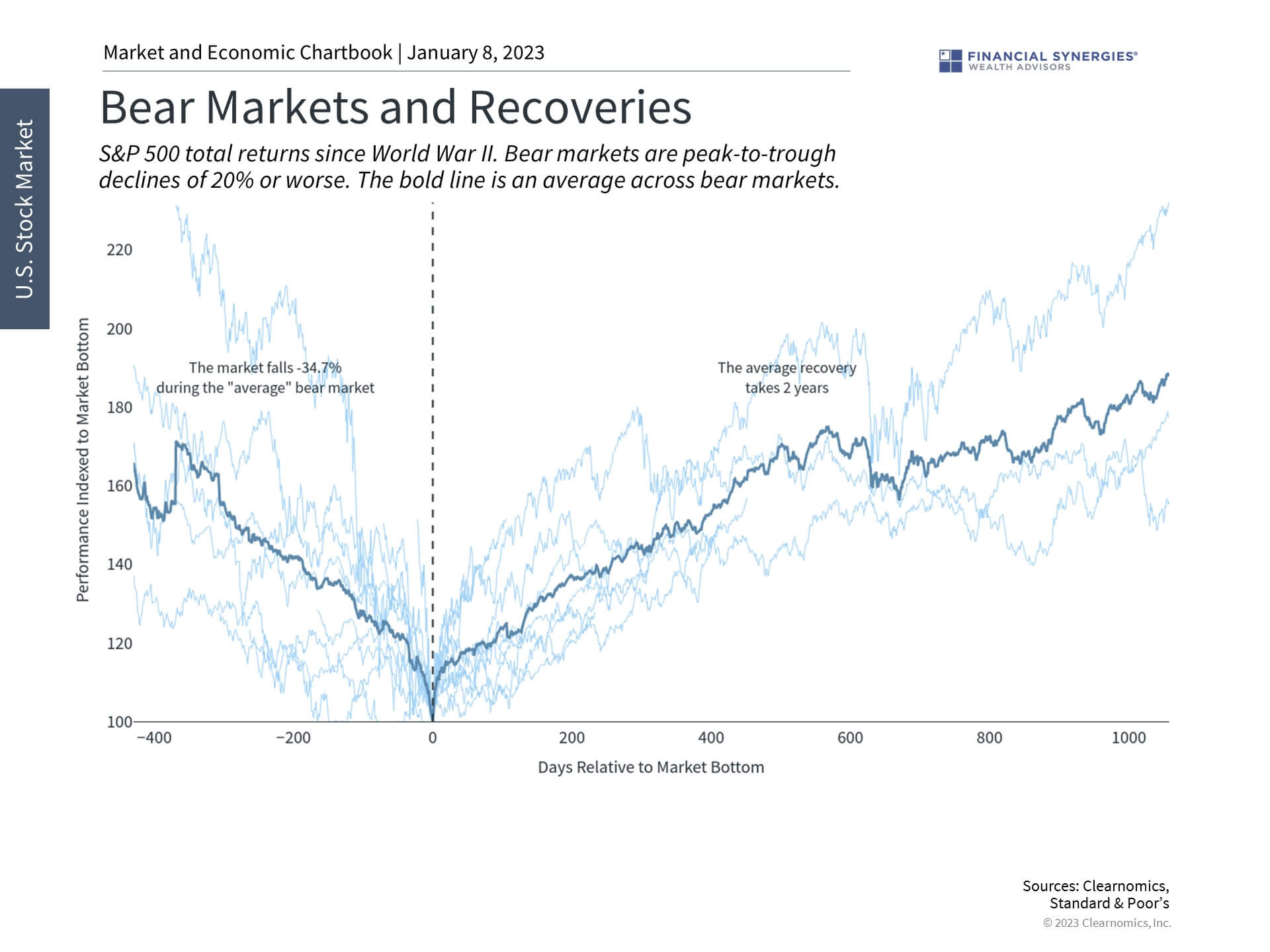 While 2022 was challenging, history shows that markets can turn around when investors least expect it. While it can take two years for the average bear market to fully recover, it’s difficult if not impossible to predict when the inflection point will occur.

Many investors have wished that they could go back to mid-2020 or 2008 and jumped back into the market. If research and history tell us anything, it’s that it’s better and easier to simply stay invested than to try to time the market. This could be true again in 2023, just as it was during previous bear market cycles.

I’ll leave you on a positive note…

I won’t pretend to have a clue what the markets will do in 2023 – that’s an exercise in futility. Though that won’t stop the army of market “gurus” from marching forward with their crystal balls, telling you how to invest for the new year. They don’t know, and they will never be asked by the media to recall what advice they gave in years past either.

But, here’s some historical perspective to keep in mind. According to Oppenheimer & Co, since 1928 the S&P 500 averages an 18% return during Pre-election years following a down mid-term year. That also comes with an 80% hit rate.

Also, since 1928, the S&P 500 has only posted back-to-back losses 8 times. Q4 returns were negative in 7 out of those 8 occasions going into the next down year. With the S&P up 7% last quarter, the math is in favor of the bulls.