5 Insights as Markets Stabilize in Q2

Investors faced historic challenges during the first quarter of the year as markets fell into correction territory. From red hot inflation to a Fed rate hike, Russia’s invasion of Ukraine to rising oil prices, investors had to adjust to a rapidly changing environment.

Year-to-date through March, the S&P 500 declined 5%, the Dow 4.6% and the Nasdaq 9.1%. Despite this, markets stabilized and bounced back during the final weeks of the quarter as more clarity emerged. Additionally, this period follows an exceptional two years of portfolio performance for diversified investors. How can long-term investors stay patient and focused throughout the rest of 2022 after a difficult start to the year?

As the old saying goes, “it ain’t what you don’t know that gets you into trouble, it’s what you know for sure that just ain’t so.” After all, markets are designed to incorporate a constant flow of new information into asset prices. Whether dealing with unexpected economic data or destabilizing geopolitical news, investors can decide quickly how it might impact stocks, bonds, and their portfolios.

However, what is problematic is when markets expect one thing and get another. Fortunately, in the case of the Fed, the situation played out exactly as many expected. Unfortunately, this wasn’t the case with Russia and Ukraine. There are at least three key lessons that are applicable to Q2 and beyond.

First, markets widely expected the Fed to begin raising policy rates and to end its asset purchase program in response to rising inflation and strong economic growth. Not only did the Fed do exactly that, but they will likely accelerate their pace of tightening in the coming months.

The Fed’s last set of projections show that the fed funds rate will reach 1.75% by the end of the year whereas more recent statements by Fed officials and fed funds futures show that 2.5% is more likely. This means that 50 basis point rate hikes are possible at upcoming meetings.

The fact that the Fed avoided surprising the market is what allowed stocks to stabilize quickly. The S&P 500 rebounded 8.6% in the second half of March while the Nasdaq recovered 13%. Both are still negative on the year, and the Nasdaq is still in correction territory, but major stock indices have been much calmer.

This serves as a reminder that Fed rate hikes are not only normal during economic expansions, but they are justified today given the strong economy and higher prices. It also shows that markets can recover when we least expect it, and often when the situation seems the worst.

Second, perhaps the most persistent impact of the Fed’s change in policy is its effect on interest rates. The 10-year Treasury yield has risen above 2% for the first time since before the pandemic. Much of the yield curve, from the 2-year on, has flattened completely. The yield curve even “inverted” briefly which many economists use as a predictor of recession, although there is often a long lead time before the economy truly decelerates.

This matters because interest rates both affect all parts of the economy and reflect underlying economic trends. The flattening of the curve is natural in a maturing business cycle as short-term rates catch up to long-term ones. This can slow growth and prevent an overheating economy by raising the cost of borrowing for businesses, borrowers, homebuyers, etc. However, rates at this level are still quite low by historical standards, especially with inflation at its highest level since the early 1980s. This trend will likely continue through the rest of the year.

Finally, unlike the Fed, the conflict in Ukraine was a surprise for financial markets and impacted the perception of risk and energy prices. While the humanitarian consequences are still at the forefront and the situation is still evolving, the impact on markets has shifted.

Initially, the invasion resulted in market swings and caused oil prices to spike, with Brent crude rising to $128 per barrel. However, as Ukraine has stood its ground in many major cities, markets have stabilized and oil prices have fallen into a range.

While every geopolitical crisis is different, history shows that markets are usually able to adjust and move forward. This was true during Russia’s annexation of Crimea, the wars in Afghanistan and Iraq, after 9/11, and more. This was even the case during the Cold War and throughout other conflicts of the 20th century. Not overreacting to these events, regardless of the news coverage and headlines, has often been rewarded.

Thus, while we are not out of the woods yet, we remain focused and disciplined throughout challenging periods in the market. The first quarter underscores that much of investing requires taking the good with the bad. In fact, investors are rewarded in the long run exactly because they can stick it out in difficult times. Below are five charts that help provide insight and perspective throughout the rest of the year.

1. Markets have stabilized in recent weeks 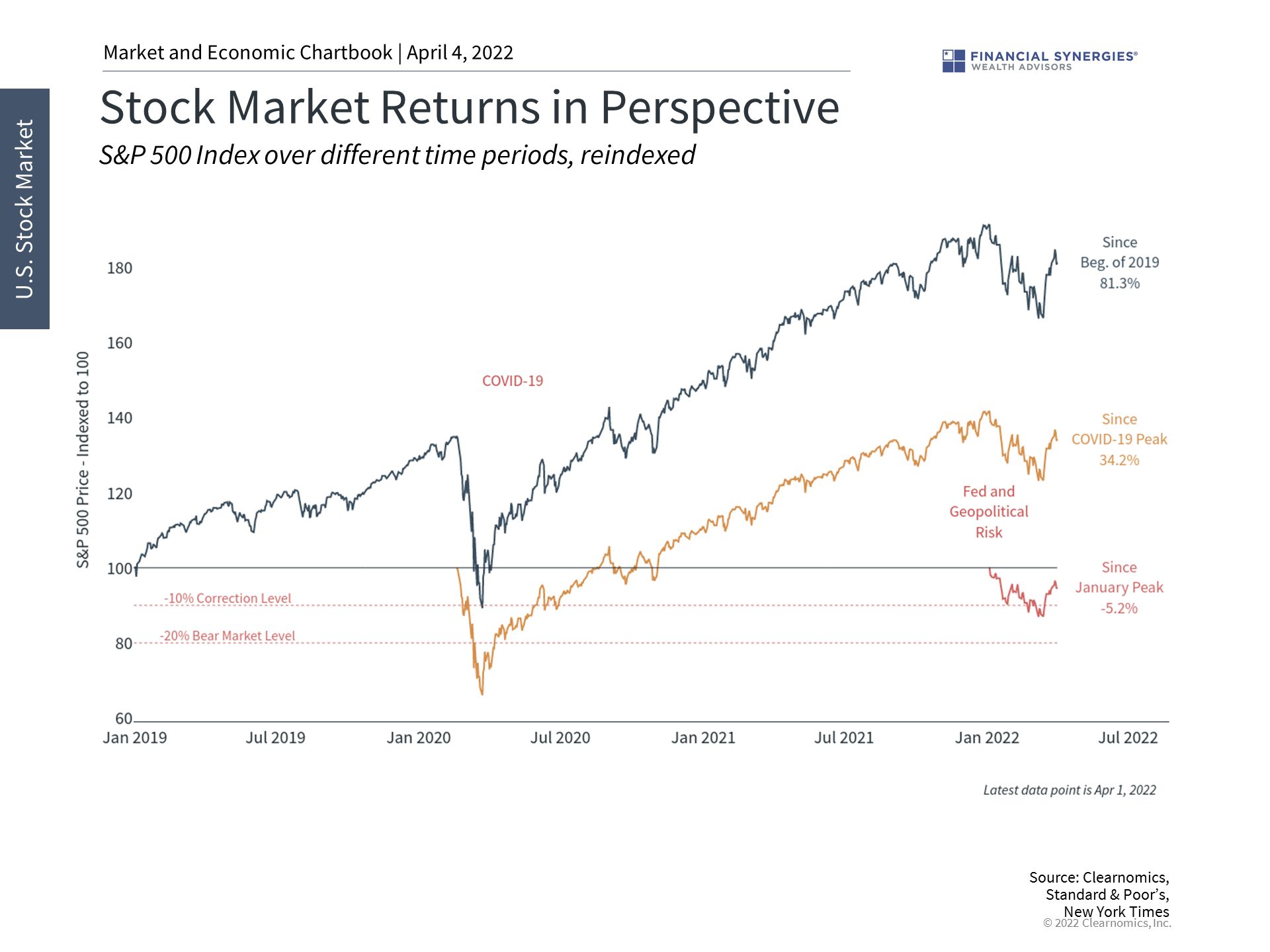 The S&P 500 and other major stock indices have stabilized in recent weeks. Not only was the Fed announcement expected, but oil prices and other factors have calmed as well. And the market has performed exceptionally well over the past several years, despite the volatility of the first quarter.

2. Historically, markets recover from corrections in a matter of months 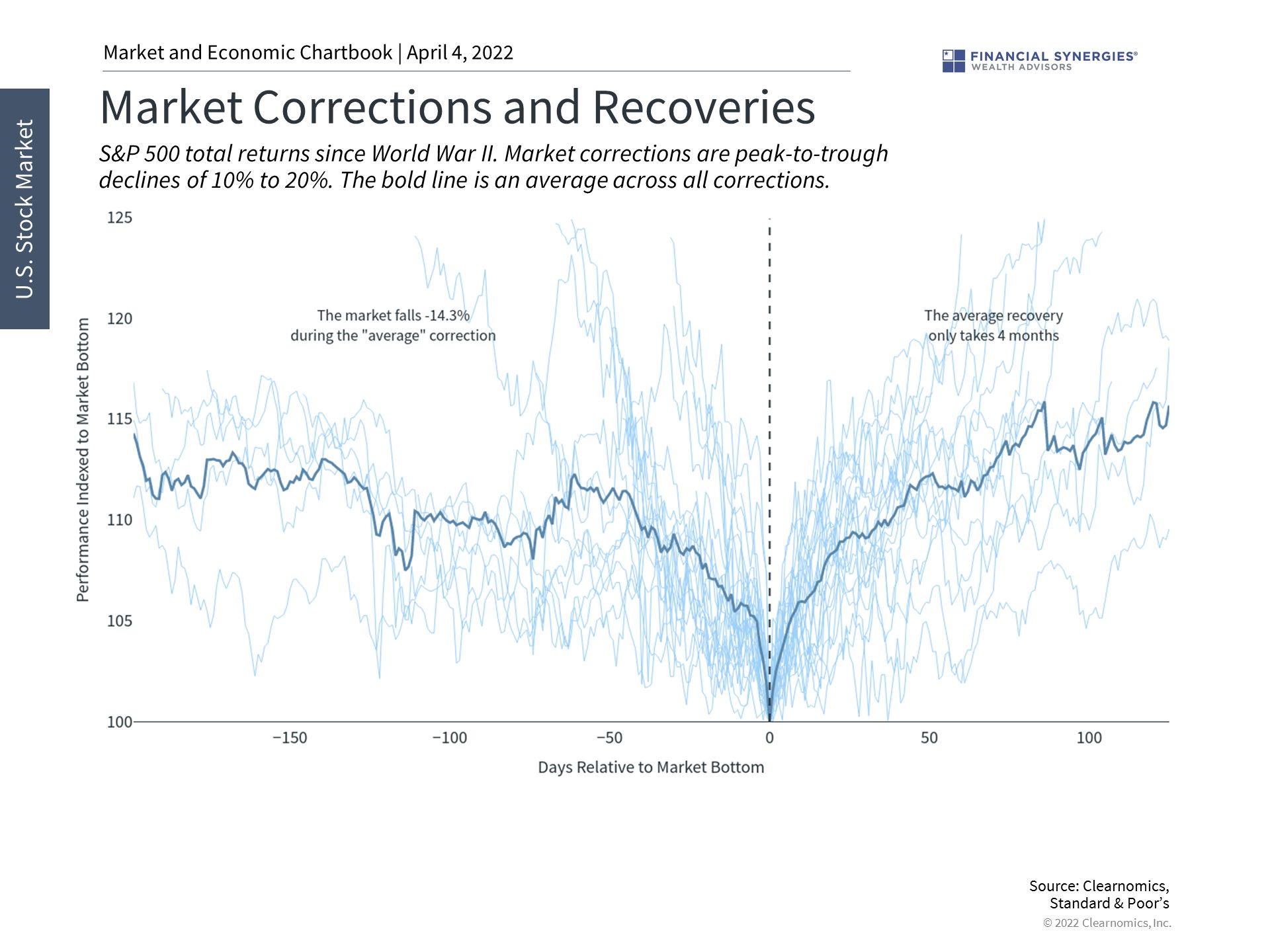 Corrections are not only normal for the stock market but are unavoidable. For long-term investors, markets can also begin to recover without notice – often when the situation seems the worst. Thus, it’s important to stay invested and not overreact to short-term events. 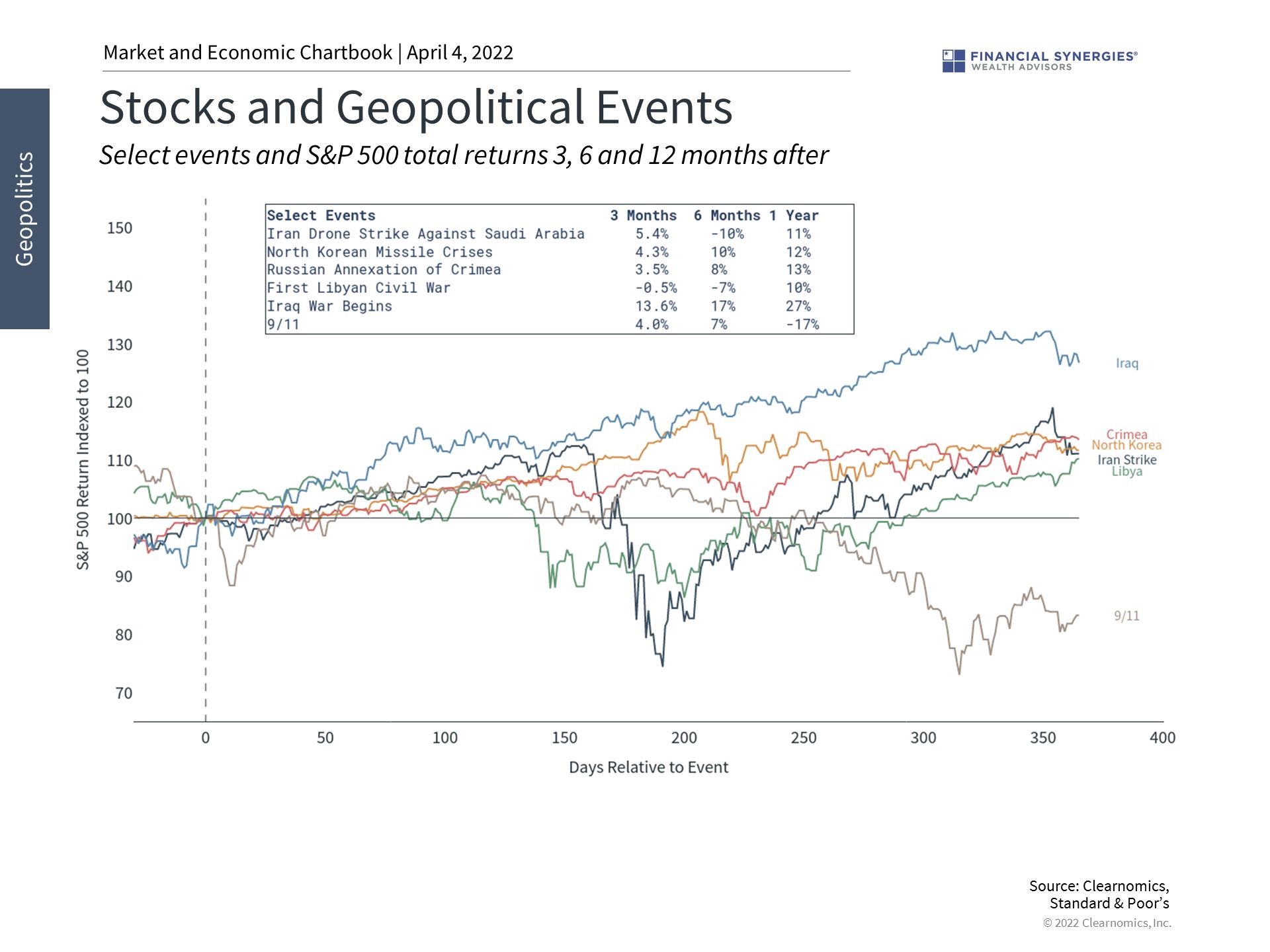 Historically, geopolitical events have had a mixed effect on markets. In some cases, such as Russia’s annexation of Crimea, markets brush these events aside. In other cases, they might make a bad situation worse, such as when 9/11 occurred during the dot-com bear market. However, in all cases, markets tend to adjust quickly.

4. The yield curve has flattened significantly 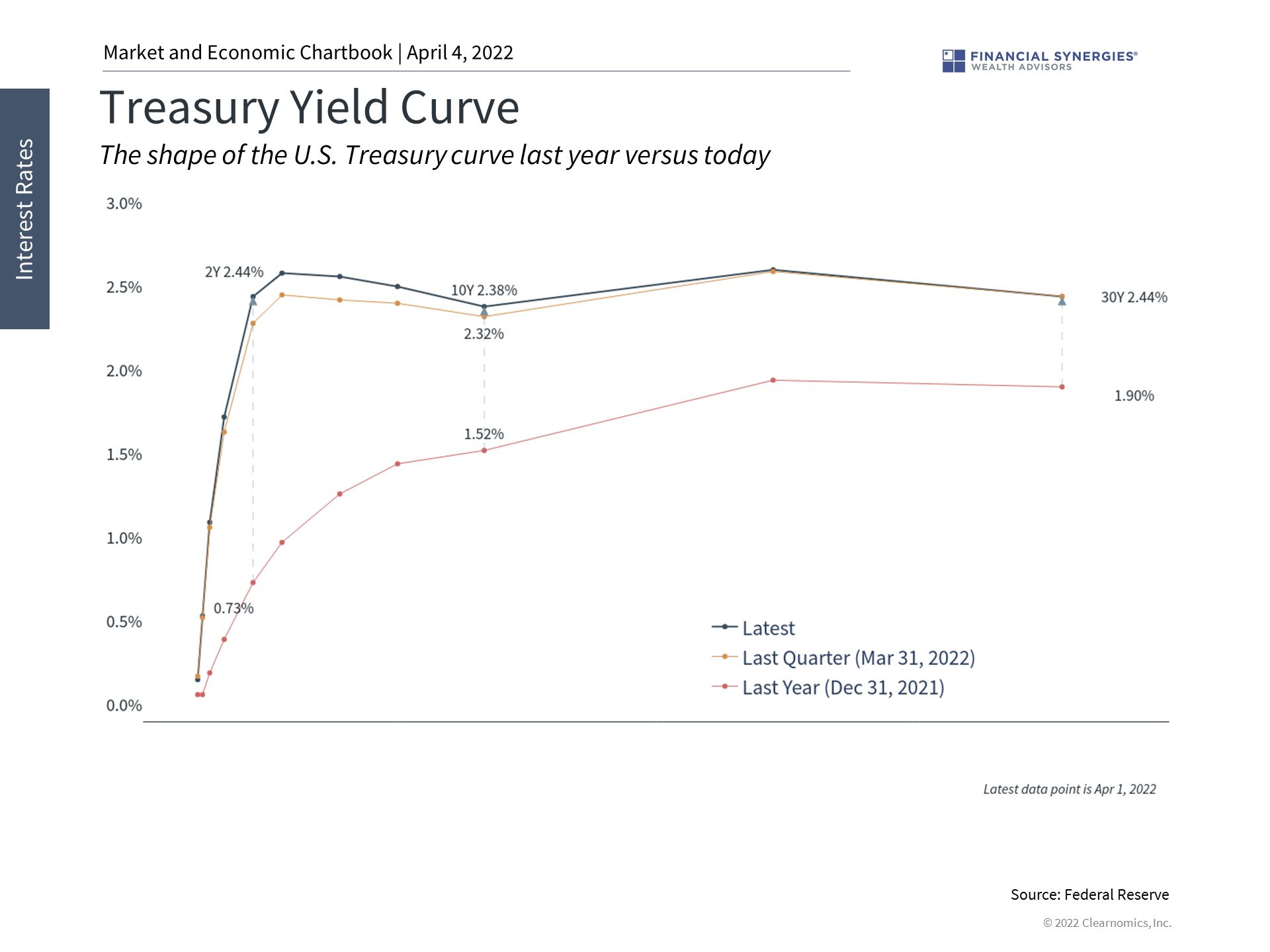 The yield curve has flattened with medium and long-term rates jumping in the past several weeks. The short end of the curve, which is heavily influenced by the Fed, should begin to increase as policy rates rise. A flattening curve is normal as the business cycle evolves.

5. The silver lining is that bonds are actually generating income 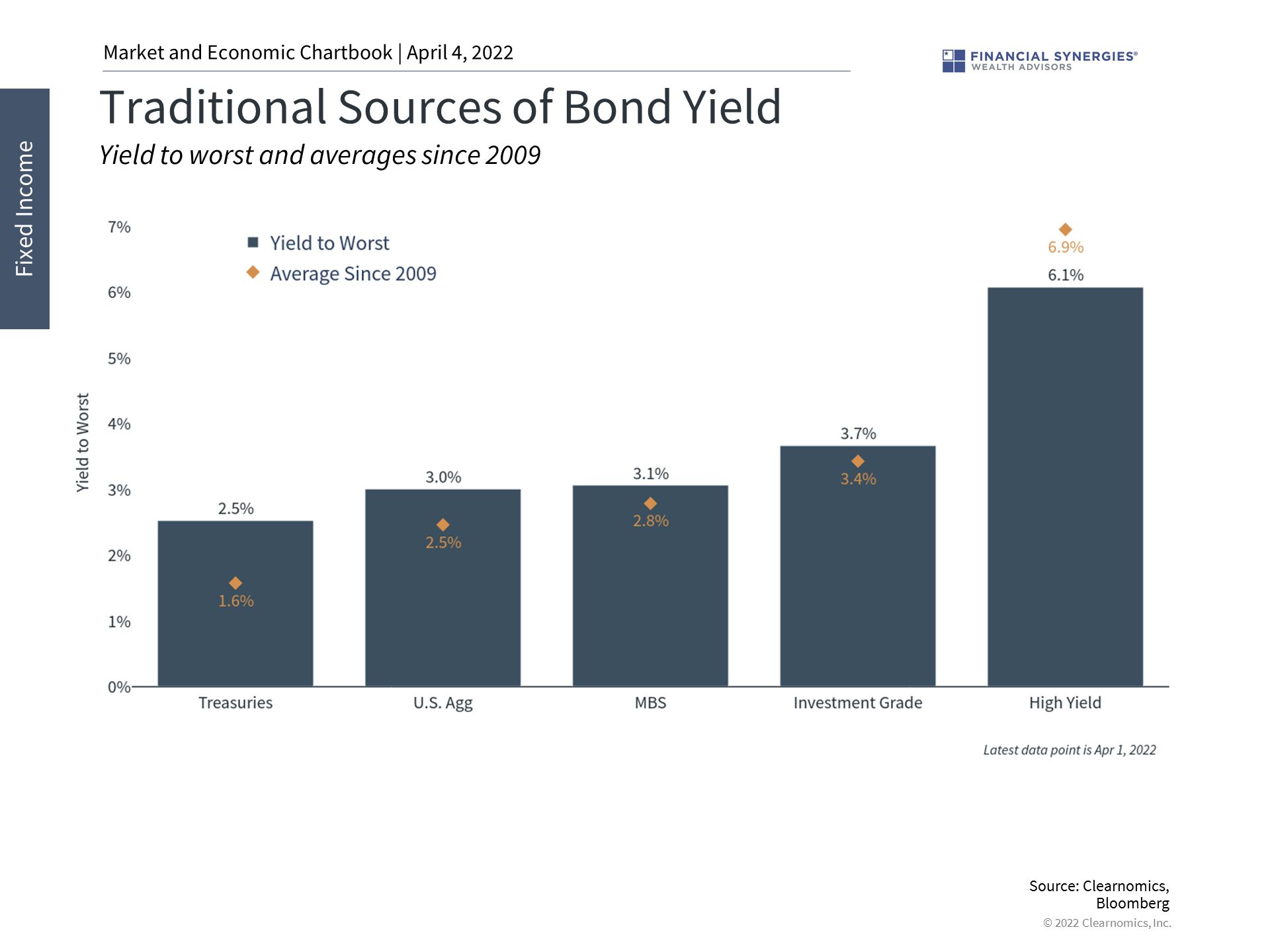 Although this has been a challenging year so far for bonds, the silver lining is that yields are higher and, in many cases, above long run averages. This is an improvement for traditional sources of portfolio income.

As unsettling as this first quarter was, there were definitely some positive takeaways. Although we can’t know what’s in store for us throughout the remainder of 2022, it’s at least comforting that markets have somewhat stabilized in the short term.