Just as it has across history, the Federal Reserve played a central role in the crisis and recovery of the past 18 months. At the onset of the pandemic, even before many cities and states went on lockdown, the Fed had already slashed its policy rate to zero percent. As the economy and financial markets worsened, the Fed began expanding its balance sheet by buying Treasuries, mortgage-backed securities, and – for the first time – corporate bonds. With the Fed announcement last week that it would begin to unwind its corporate bond holdings, some investors may wonder how this and future Fed actions could affect their portfolios.

The Fed’s objective is to keep the economy and financial markets running smoothly. On the economic front, they do so by examining a wide variety of data and targeting a dual mandate of inflation and unemployment. However, long-term economic trends matter little if the financial system seizes up in the short run, as it did during the 2008 financial crisis. This is why, as credit markets began to falter in early 2020, the Fed pulled out all the stops. Buying corporate bonds was one way to directly contain a spike in borrowing costs (i.e. by providing a floor under bond prices).

At this point, the financial system has not only calmed, but many argue that it is overextended in many areas. This includes high-flying tech stocks, which have been volatile in recent months, “meme stocks” with significant retail investor interest, SPACs, and more. Thus, it is not surprising for the Fed to begin to reduce its corporate bond holdings.

And this hints at the bigger question: when will the Fed begin to reduce the pace of Treasury and MBS purchases, which currently stands at $120 billion per month, and eventually raise rates? As is always the case, next week’s Fed announcement and press conference will be scrutinized for any hints on the timing and magnitude of these events.

Expectations vary, but many believe the Fed will begin unwinding its balance sheet at the start of 2022 and raise rates in early 2023.

This timing may change if inflation continues to heat up and the economy makes significant progress. Last week’s jobs report showed that the unemployment rate has already fallen to 5.8%. Moreover, when the Fed does begin to discuss these topics, many investors worry about another “taper tantrum” – a period in 2013 when the mere mention of reducing asset purchases rocked the bond market. Although there is certainly the risk of another such event, there are a few reasons for long-term investors to stay calm.

First, as disruptive as the taper tantrum was to fixed income holdings, the typical diversified investor finished the year with strong gains. This is because the S&P 500 generated a 32% return in 2013, offsetting the challenges faced by bonds. Bonds recovered soon after the following year.

Second, the Fed has (presumably) learned from that episode and will continue to bend over backwards to avoid a repeat. This means that they will either keep monetary policy loose for longer, or be extremely gradual in their approach. Of course, it can be argued that it may be better to rip off the band-aid, especially if there are excesses in the financial system.

Third, there is an old debate on whether “tapering is tightening.” In other words, is reducing the pace of bond purchases equivalent to selling bonds from its balance sheet? That is, is it the level or the direction that matters? While this is a theoretical debate, it’s clear in reality that the Fed will continue to be a significant buyer of bonds for quite some time. There are few reasons for long-term investors to worry about a sudden change in Fed policy.

Regardless of how the Fed approaches tapering and tightening, long-term investors are better off staying focused on their financial goals rather than reacting to every Fed announcement. Below are three charts that help to put monetary policy in perspective. 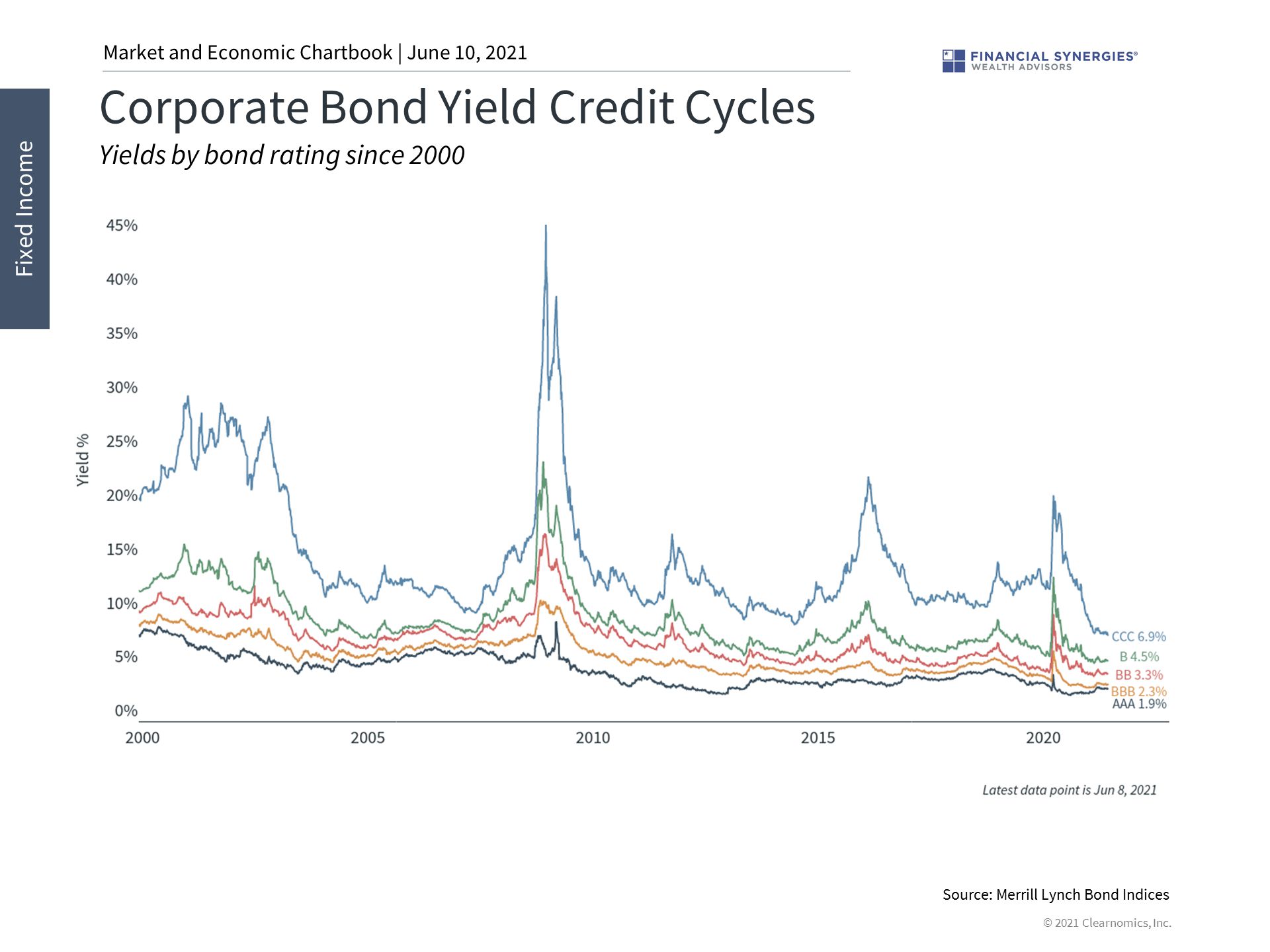 Credit markets began facing stress during the initial months of the pandemic. Actions by the Fed and Congress, and a quick recovery in the market helped bond yields to calm. 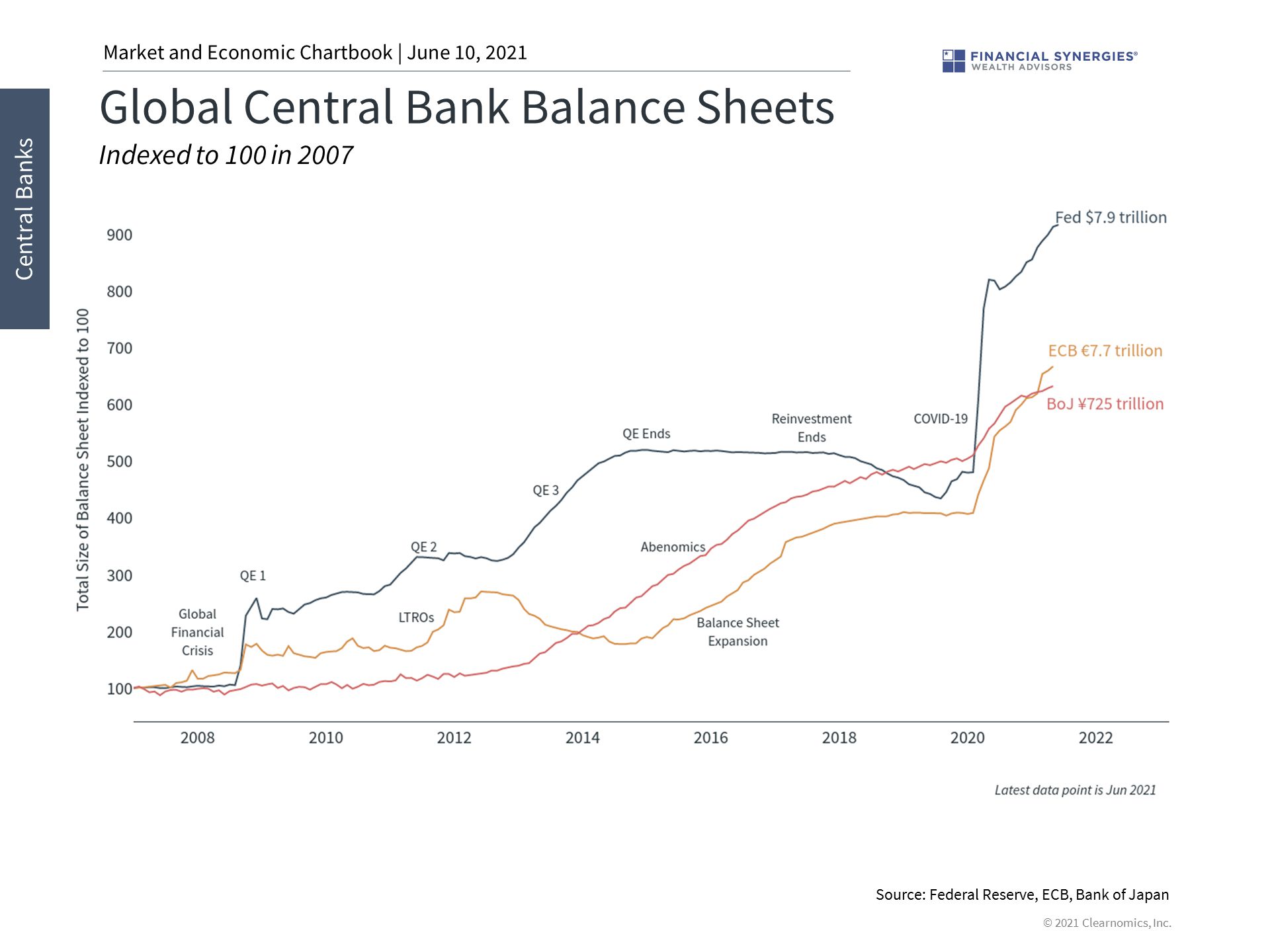 The Fed has expanded its balance sheet to nearly $8 trillion. This eclipses the $4.5 trillion reached after the financial crisis as well as the growth in the balance sheets of other major central banks.

3. Markets expect Fed tightening over the next two years 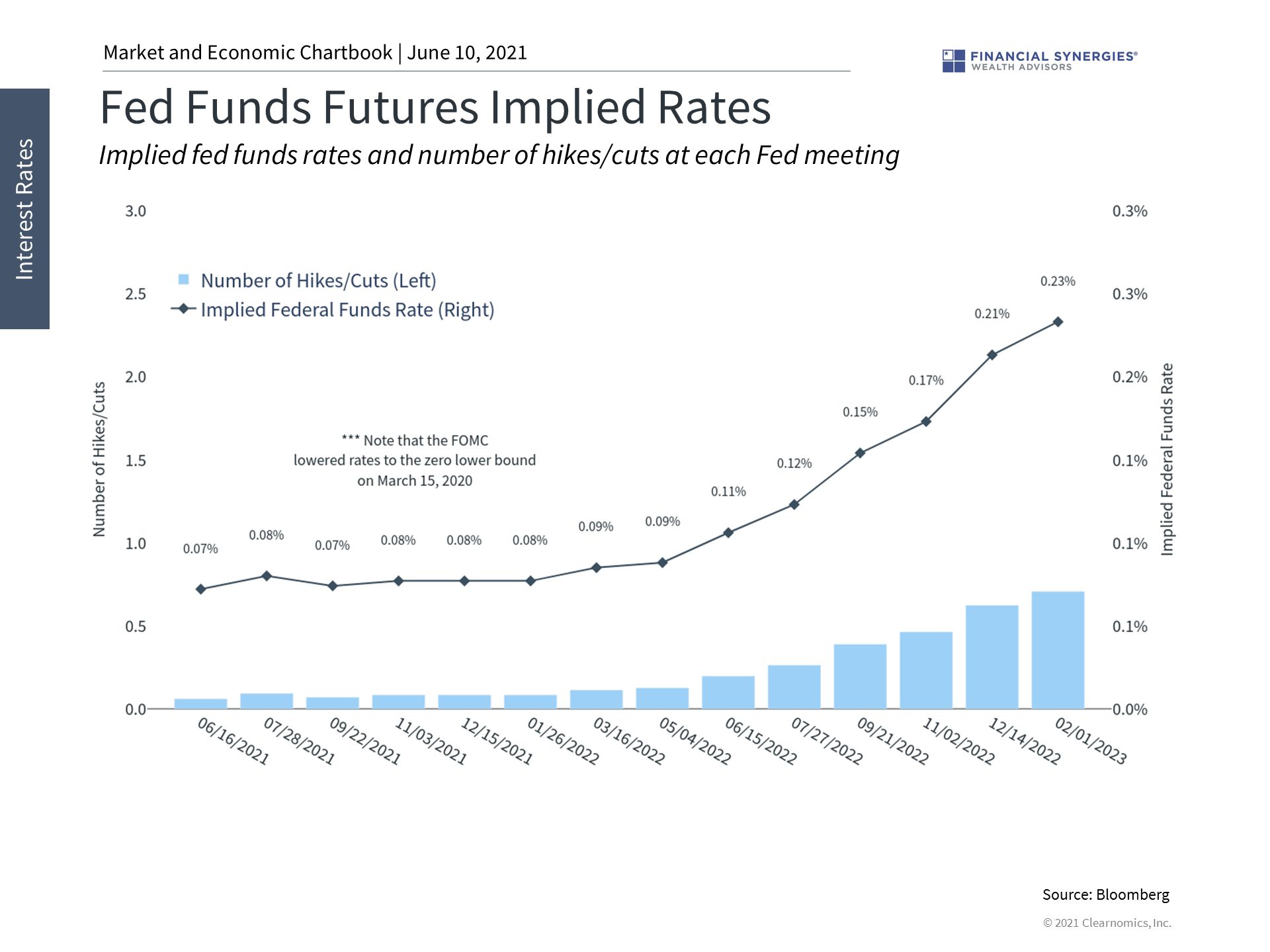 At the moment, markets expect the Fed to begin raising rates in early 2023, and to possibly begin unwinding its balance sheet in early 2022. Of course, investors will watch for hints that these events could occur sooner.

As always, focus on long-term financial goals rather than short-term Fed moves. Diversified portfolios helped to protect investors during the financial crisis, the taper tantrum, and over the past 18 months – regardless of Fed policy.